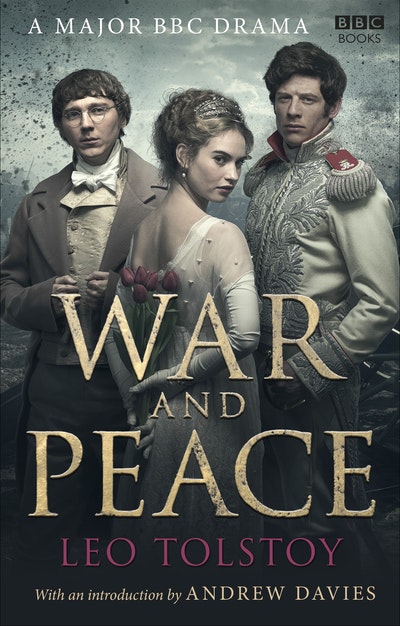 New BBC TV tie-in edition of the original masterpiece by Leo Tolstoy, with an introduction by Andrew Davies.

This is the official tie-in edition to the BBC adaptation of War and Peace with an exclusive introduction written by Andrew Davies.

Tolstoy’s beguiling masterpiece entwines love, death and determinism with Russia’s war with Napoleon and its effects on those swept up by the terror it brings. The lives of Pierre, Prince Andrei and Natasha are changed forever as conflict rages throughout the early nineteenth century. Following the rise and fall of some of society’s most influential families, this truthful and poignant epic is as relevant today as ever.

This six part adaptation has been written by Bafta-winning author Andrew Davies and will be directed by Tom Harper (Peaky Blinders, The Scouting Book for Boys, Woman in Black: Angel of Death). Accompanied by a stellar cast including Paul Dano (12 Years a Slave, Prisoners, There Will Be Blood) as the idealistic Pierre, James Norton (Happy Valley, Belle, Grantchester) as the ambitious Prince Andrei and Lily James (Cinderella, Downton Abbey) as the impulsive beauty Natasha. It also features the legendary Jim Broadbent (Moulin Rouge, Harry Potter, Longford), Gillian Anderson (The Fall, The X-Files), Greta Scacchi (White Mischief, Presumed Innocent) and many more.