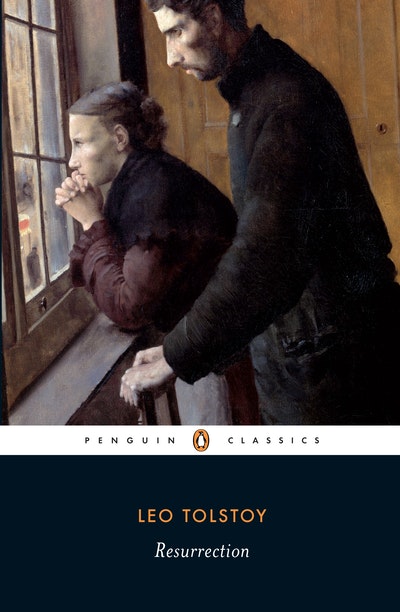 Serving on the jury at a murder trial, Prince Dmitri Nekhlyudov is devastated when he sees the prisoner – Katyusha, a young woman he seduced and abandoned years before.

Leo Tolstoy's last completed novel, Resurrection is an intimate, psychological tale of guilt, anger and forgiveness, translated from the Russian with an introduction and notes by Anthony Briggs in Penguin Classics.
Serving on the jury at a murder trial, Prince Dmitri Nekhlyudov is devastated when he sees the prisoner - Katyusha, a young maid he seduced and abandoned years before. As Dmitri faces the consequences of his actions, he decides to give up his life of wealth and luxury to devote himself to rescuing Katyusha, even if it means following her into exile in Siberia. But can a man truly find redemption by saving another person? Tolstoy's most controversial novel, Resurrection (1899) is a scathing indictment of injustice, corruption and hypocrisy at all levels of society. Creating a vast panorama of Russian life, from peasants to aristocrats, bureaucrats to convicts, it reveals Tolstoy's magnificent storytelling powers.
Anthony Briggs' superb new translation preserves Tolstoy's gripping realism and satirical humour. In his introduction, Briggs discusses the true story behind Resurrection, Tolstoy's political and religious reasons for writing the novel, his gift for characterization and the compelling psychological portrait of Dmitri. This edition also includes a chronology, notes and a summary of chapters.
Leo Tolstoy (1828-1910) spent his youth in wasteful idleness until 1851, when he travelled to the Caucasus and joined the army with his older brother, fighting in the Crimean war. After marrying in 1862, Tolstoy settled down, managing his estates and writing two of his best-known novels, War and Peace (1869) and Anna Karenina (1878). A Confession (1879-82) marked a spiritual crisis in his life, and in 1901 he was excommunicated by the Russian Holy Synod. He died in 1910, in the course of a dramatic flight from home, at the small railway station of Astapovo.
If you enjoyed Resurrection, you might like Ivan Goncharov's Oblomov, also available in Penguin Classics.