A riveting pick for book club.

More than fifteen years after the events of The Handmaid’s Tale, the theocratic regime of the Republic of Gilead maintains its grip on power, but there are signs it is beginning to rot from within. At this crucial moment, the lives of three radically different women converge, with potentially explosive results. 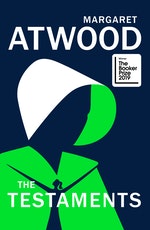 In this electrifying sequel to The Handmaid’s Tale, Margaret Atwood answers the question that has tantalised readers for decades: What happened to Offred?