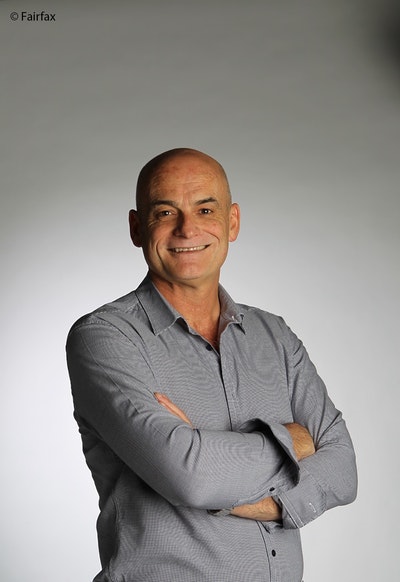 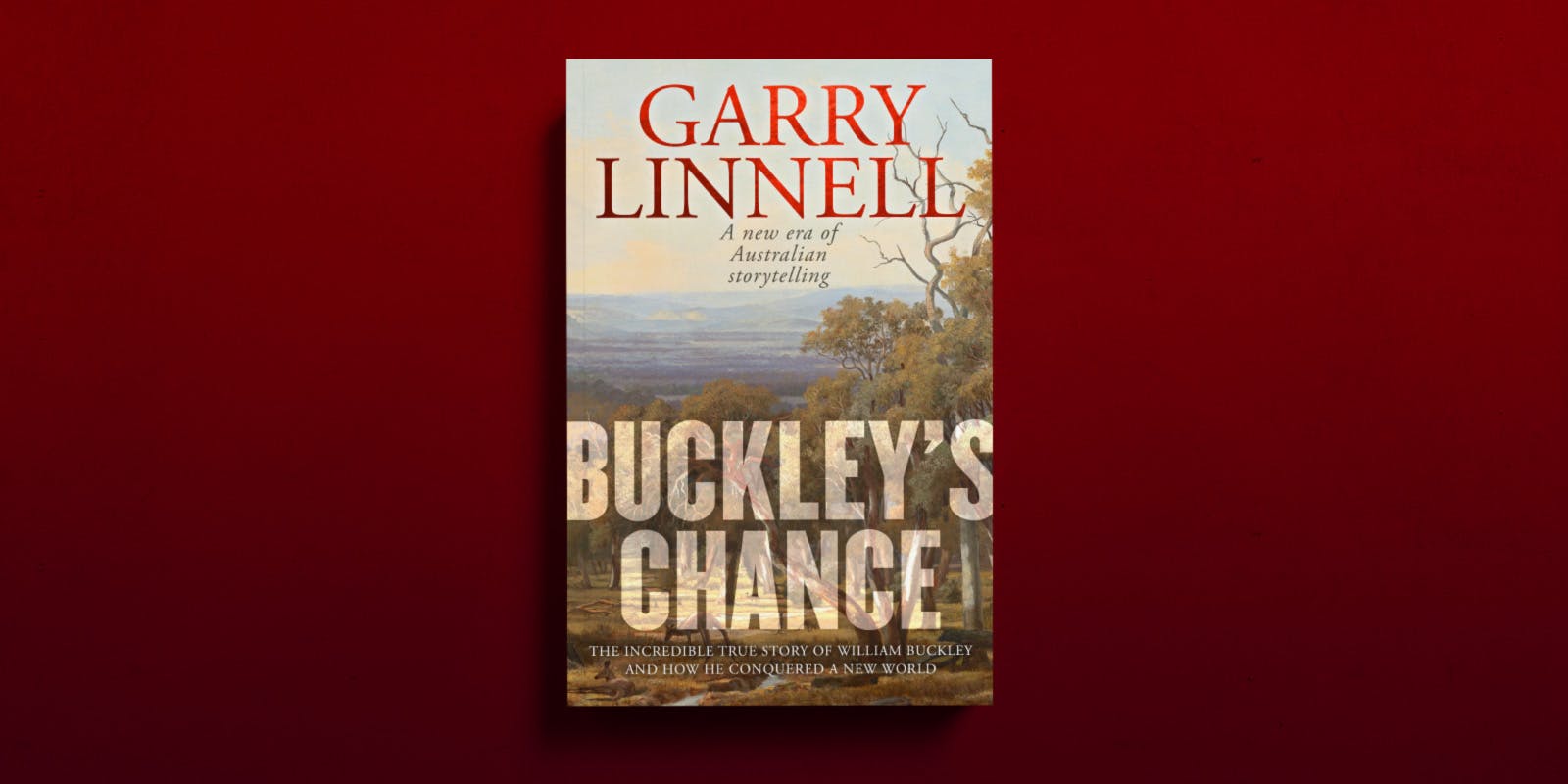 For a man who had very large feet and took very long strides, William Buckley left surprisingly few footprints. Perhaps that is why he has long been regarded as a ghost.

Like any decent spirit, his presence has lingered. As a child growing up in the Geelong area, I often visited Buckley’s Falls, one of the man’s favourite haunts almost two centuries earlier, and which today is a popular riverside reserve with walking trails and pristine views of stunning waterfalls.

During the summer holidays I would often gaze up at Buckley’s Cave, high on the wind-swept sandstone cliffs of Point Lonsdale, where he supposedly took refuge and where a famous lighthouse has long warned approaching ships about the treacherous entrance to Port Phillip Bay.

Like any other Australian, I could describe an undertaking with long odds of success as having ‘Buckley’s Chance’. It was even easy to picture him, too, thanks to the imagination of 19th and early 20th century artists who turned him into an ageless cliché: a giant, bearded white man clothed in animal skins, carrying a spear and hunting kangaroos.

The legend of William Buckley, it seemed, was everywhere. But the man himself? High school textbooks contained no references to him. History teachers could shed no light on his story. Many people had come to believe his mythical status was just that – a legend that had been exaggerated and romanticised down the years, a fitting tale for tourism officials but one which had little basis in fact.

So, after almost half a century of hearing about Buckley, I decided it was time to get to know him.  Delving into the historical records of the time, I was staggered to find out how little I knew about him and the era in which he lived.

Born in the early 1780s in a small rural village in Cheshire, he often found himself standing at key crossroads in history.

He was injured while fighting for the English against Napoleon’s army in the Netherlands in 1799, a time when Europe was experiencing a series of damaging wars that eventually led to Britain becoming the world’s superpower of the 19th century.

He was found guilty of stealing a bolt of cloth and sentenced to hang, only to have this commuted to transportation for life to Port Phillip. He endured the filth and misery of the prison hulks in England in the early 1800s, and then a six-month-long journey in a wooden ship to Australia.

All of this amid the background chaos and noise of the Industrial Revolution. But what came next truly established the legend. After fleeing from a fledgling settlement near Sorrento in Victoria, he was adopted by the Wadawurrung people and spent the next three decades immersing himself in Aboriginal life and lore – ultimately forgetting the English language. He was dubbed Murrangurk, the spirit of a dead clan member returned in a white body.

No other European spent as long living with Indigenous people. That fact alone makes Buckley one of Australia’s most important historical figures.

When he finally made himself known to settlers from Van Diemen’s Land, as they set about colonising the district of Port Phillip and establishing what became the city of Melbourne, he then found himself trapped in a bitter cultural war that soon led to one of the swiftest attempts at annihilating an Indigenous culture that the world had seen.

So many stories. So many experiences. The problem? William Buckley was illiterate. He had trained as a boy to become a bricklayer, not a storyteller. The only two accounts of his life told in any depth were written by others. The first was based on an interview conducted with him by the Reverend George Langhorne in 1837. The second was a memoir written for him by a volatile Hobart newspaper editor, published more than a decade later, when both men were in dire need of money. Both tales, while important historical documents, are riddled with inconsistencies and vagaries and told through the lens of 19th century colonial thinking.

From the start I was determined tell Buckley’s story as a narrative. But writing about events of the past is often like watching a foreign language movie without the subtitles. You can get the general gist of things, but you miss the nuances. Conversations take place that you don’t understand. Little but important details can be overlooked because no apparent explanation exists. Buckley’s story was like that. And making it more difficult were the opinions of 19th century historians. When he returned to white culture Buckley was labelled by many of them as a buffoon, a ‘mindless lump of matter’, a silent, loping giant with no interest – or ability – in conveying the extraordinary events of his life.

He was dismissed as an aberration, a Forrest Gump of his time, a witless soul stumbling through one adventure to another. But that made no sense. If Buckley was so lacking in smarts and awareness, how did he manage to survive – quite comfortably, too – for so long? How had he managed to overcome all the obstacles placed in his way without cunning and more than a little nous?

Eventually I decided the only way to tell his story was to adopt a technique uncommon in historical nonfiction. While it might not please the purists, it would be a method that would bring Buckley into sharper focus and provide greater flexibility when it came to writing about his extraordinary life.

I would have a conversation with William. I would ask him questions.

I did this because, after reading through hundreds of old documents and books and journals, and by revisiting Wadawurrung country and exploring it with a new perspective, I started to form my own theory about William Buckley. I began to suspect that playing the role of a slow-talking, slow-thinking giant had been his way of protecting himself, of shielding himself from the no-win situation he found himself in after returning to white culture.

The settlers employed him as an interpreter and mediator between themselves and the Aboriginal clans of the Port Phillip area. It did not take long before many of them began to suspect his true loyalties lay with the Aboriginal people, and there is quite strong evidence that he began to develop a distinct distaste for the methods and attitudes of the pastoralists, who set about savagely seizing traditional lands.

Likewise, he also found himself distrusted by some of the Port Phillip Aboriginal clans, who came to view him as the sympathetic messenger for the white invaders.

Employing the present tense and addressing Buckley throughout the book – ‘Now, William, are you pretending to be stupid again?’ – gave me the ability to explore more of his world. It meant I could examine possible explanations for events whose meanings had been shrouded by the passing of history, a method of papering over the gaps.

And, yes, I figured it would be entertaining as well. I like history. I just find that so much of it is written in a dull and formulaic way. Why can’t it be fun as well?

William Buckley was dismissed by many of those snooty 19th century historians as little more than a bizarre historical footnote. But he is far more than that.

There are inherent dangers when it comes to peering into the past with a modern perspective. But there is no disputing that Buckley’s story is set against one of the most profound eras of change in human history. It was an age of exploration, a time of daring… but also a period of savagery and ignorance, a world forged by Christian white supremacists with no regard for the rich and complex culture of Australia’s First Peoples.

William Buckley was no buffoon. Buckley’s Chance might be a book about a man who overcame incredibly long odds of survival. But ultimately, it’s also about an illiterate bricklayer who, despite living two centuries ago, has much to teach us about accepting and respecting other cultures.

Perhaps that’s why his spirit lives on.