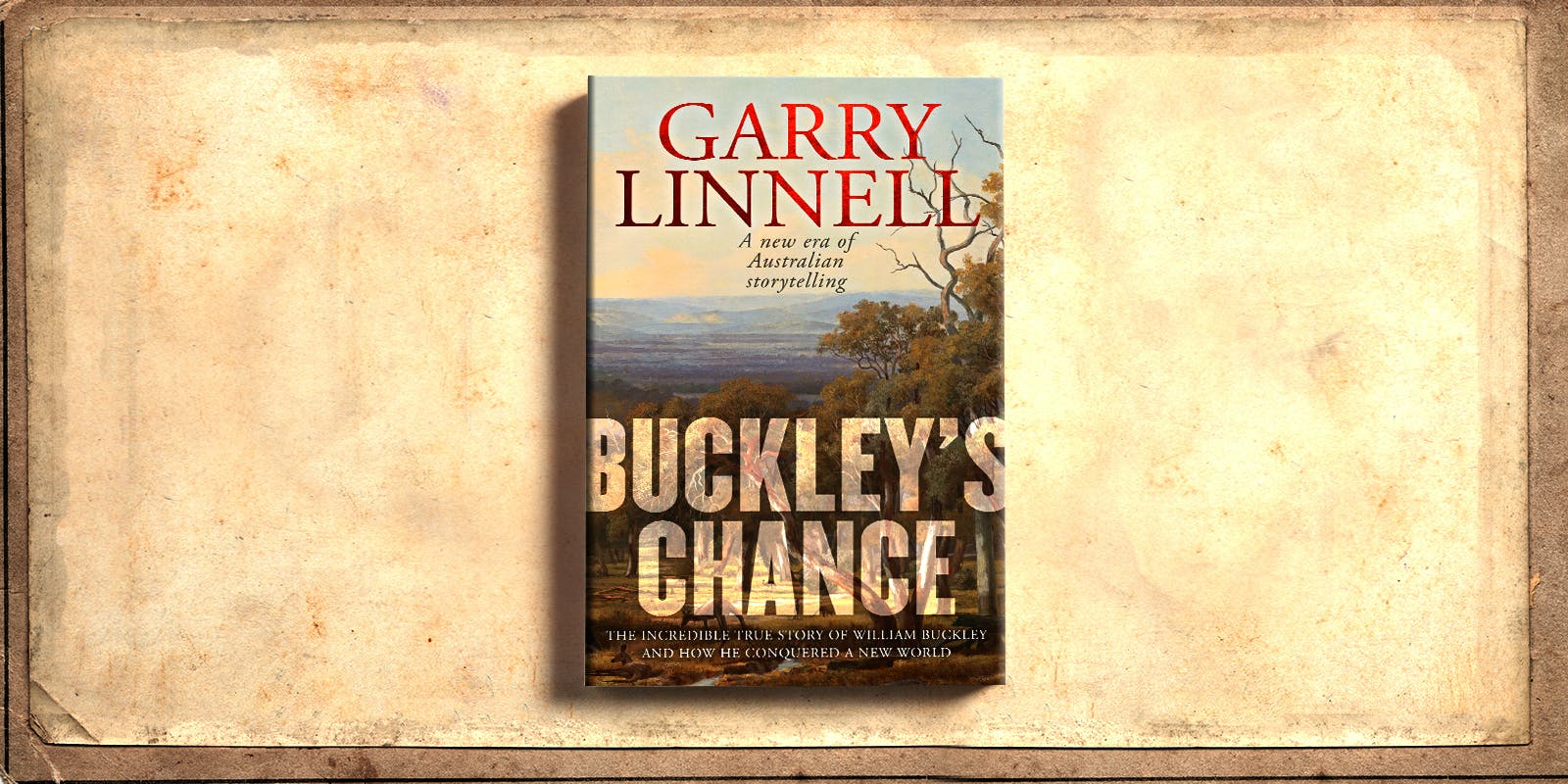 Shackled in chains and destined for the end of the Earth, it’s 1803 and it seems as though William Buckley’s luck as run out. ‘How do you fancy your chances here on the deck of the HMS Calcutta?’ writes Garry Linnell in Buckley’s Chance: the Incredible True Story of William Buckley and how he Conquered the New World. ‘Not good, are they. There is an attachment of guards from the marines watching all of you shuffle aboard in your leg irons. Just before they take you below to the two big prison rooms you get a quick look around, enough to know things are going to be awfully cramped for the next six months. More than 500 of you – 300 convicts – all living and eating and shitting in a world made of oak and tar 230 feet long and 41 feet wide. That’s not much more than six square feet for each of you – a world less than half a soccer field, held together by nail and rope and more than a little of, yes, hope.’

Surviving amidst the filth, violence, depravity and disease of a 19th century convict ship to Australia is a feat of endurance in itself. But what happens next becomes one of the most remarkable survival stories in history. And in Buckley’s Chance, Walkley Award-winning journalist Linnell recreates the story of the man behind the expression – and the myth. In the passage below, Linnell introduces the towering figure of William Buckley.

December 1803
There is a full moon in hell. It hangs low in the western sky on this warm night, casting shadows with its dull light. The seeing is good. There is a trail of snapped twigs and bent undergrowth that leads down to the beach where his enormous feet have gouged large holes in the sand.

Can’t be too long now before they corner the ungrateful bastard.

What to do then? Put a lead ball through his back or head? Or drag him back to camp and have him flogged so hard next morning the hot sand will turn red and he’ll never be able to straighten that huge frame of his again?

Perhaps they can manage something crueller. Trying times always motivate men when it comes to devising new methods of inflicting pain on others. He is not a man known for his words. Brooding silent type, he is. A man his size doesn’t really need to say much, after all. But by God, once they finish with him the bush will echo with his pain. They will have him crying out for the mother he barely knew. And maybe the father he never knew.

No punishment can be fitting enough for a man who decides to escape in the days over Christmas, forcing the King’s men to put down their rum and pick up their muskets and pursue him through this wretched scrub. They have only been here for two months but already they have come to know this as the devil’s land, parched and crawling with snakes and bugs and hostile tribes. The only drinkable water has come from wooden casks sunk in the sand – and even that has been making them sick. The heat scalds, the dry winds from the north leave even convicts, grateful to have escaped the horrors of England’s prison ships, pining for home. It is an ancient land, this one, its bones so old you can hear them crunch with each step. They will leave this world very soon and search for sanctuary elsewhere, a better place where a free settler won’t wake in the morning looking like a sufferer of the pox from all the mosquito bites, a land where a true colony can be founded and have a decent chance of surviving and even flourishing.

But first they must capture the big bricklayer and the others who have escaped into the bush.

Heavy boots thud on dry soil. Shouts drown out the gentle lapping of waves on the nearby beach. Nearby, the sound of a musket being fired. Not long after, a whiff of acrid burnt powder. And then silence, broken only by the odd curse. The trail has turned cold and lifeless. William Buckley is long gone.

He will always be a hard man to find. No wonder the Aboriginals will call him a ghost.

Decades later he will be easier to find. There he is, walking down the street with his Irish wife, Julia. You don’t need to listen to the whispers of passers-by or follow their furtive glances. How could you miss them? He looms so large, she so tiny, the tips of their fingers barely meet.

He has come up with a solution for this, of course. A lifetime of being forced to adapt does that to a man. He might not be able to make up the age gap separating them. But this? He has looped a handkerchief around both their wrists so they can remain connected. She has already lost one husband and in these lean times, when money and food are scarce, she cannot afford to lose another.

And William is extraordinary, even if he is finally beginning to feel and show his age. He is now in his 70s – more than 30 years separate him from his bride. She has nursed him through a battle with typhus, cooling his fevers and tending to the painful rashes. It was the first time he could remember falling ill and for a time there it was touch and go. But once again his remarkable strength and con­stitution pulled him through. It may have weakened him but when he strolls down the streets of Hobart Town, with Julia by his side, he insists on carrying himself straight and erect. Like the soldier he used to be. Like the free man he has become.

He has no wealth, the pair of them barely getting by on his paltry pension. But he has been a good husband. A patient man, devoted to her and her daughter. Look at how he steps slowly, shortening his stride so Julia doesn’t have to run to keep up.

She knows what they say behind their backs. She has seen the fingers pointing, heard the snide laughter, registered the wry smiles. There are men who regard her husband as stupid, a simple buffoon no smarter than the Aboriginals he lived with for so many years. Others are not so sure. They suspect William Buckley knows far more than he lets on.

He is, after all, the great survivor, perhaps the greatest of them all. His name is known from Sydney to London. Even now, so many years after his escape and his disappearance, the newspapers still refer to him as the Wild White Man. See the modern Hercules who survived for 32 years among the savages! Be amazed at how long he went without ever seeing a civilised white face! Ponder the depravities he endured, the loneliness he suffered!

Who could have imagined that a boy from a village whose people never journeyed more than a few miles in their lives would one day travel the globe? Who would have thought a child from rural Cheshire, cast out by his mother and stepfather, destined only for the chapped, coarse hands of a bricklayer, would go on to fight Napoleon’s army? Who could even begin to imagine the horrors he experienced while shackled on a stinking, filthy prison hulk? Or the long and rough sea journey to the other side of the world and, soon after that, all those years living with Aboriginal tribes, becoming one of them until he forgot his own language?

It’s true. No other man has seen or experienced anything close to that. No man has been tried and tested like William Buckley.

Yet his silence and reticence baffles and exasperates. What man does not want a hand in his own epitaph? What man who makes history would prefer to vanish from its pages? There was an offer once to put him on stage and take the plaudits of the crowd. A stupid man might have walked straight into that trap, dazzled by the lights and applause and all those eyes gazing upon his big frame in admira­tion and awe. There was no way William Buckley was becoming an exhibit in a freak show. What many don’t understand is that all those years without seeing a white face or sleeping on a soft bed were easy compared to what happened when he came back. He has been used enough, torn in so many directions and pummelled by the motives of others so often that he wants no part of it.

Besides, he has already had his say. Didn’t he sit down with a newspaper editor, John Morgan, and allow him to write his story? Not the full story, of course. But enough to at least feed those inquir­ing minds a few morsels and tidbits about his life. God knew both of them needed the money.

But even in these, his last remaining years, a time when so many men feel the urge to remind the world they lived and did things that deserve to be remembered, he will shy away from marking his place. And all those frustrated souls who never get to really know him, let alone understand him, will be left with the memory of this big lumbering man, joined to his tiny wife by a small handkerchief, his heavy face staring ahead, ‘aimlessly walking the streets… with eyes fixed on some distant object’.

Centuries later, after all the extraordinary facts and lies and myths have merged into one, when historians sift through the torpid memoirs of men who did far less than Buckley, searching for a hint of his character, a small trace of his personality, he will remain that distant object.

Come, William. It is time to give up your secrets.