A small-time scam artist finds himself in a distant land and in a world of trouble. With limited options, he accepts the help of a local crime boss. And before you can blink, events spiral into a compelling yet unsettling battle between light and dark, love and lust, morality and corruption. This has all the ingredients of an intoxicating book club read. Here are some discussion points to ponder while you catch your breath. 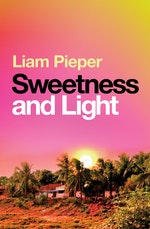 An intoxicating, unsettling story of the battle between light and dark, love and lust, morality and corruption