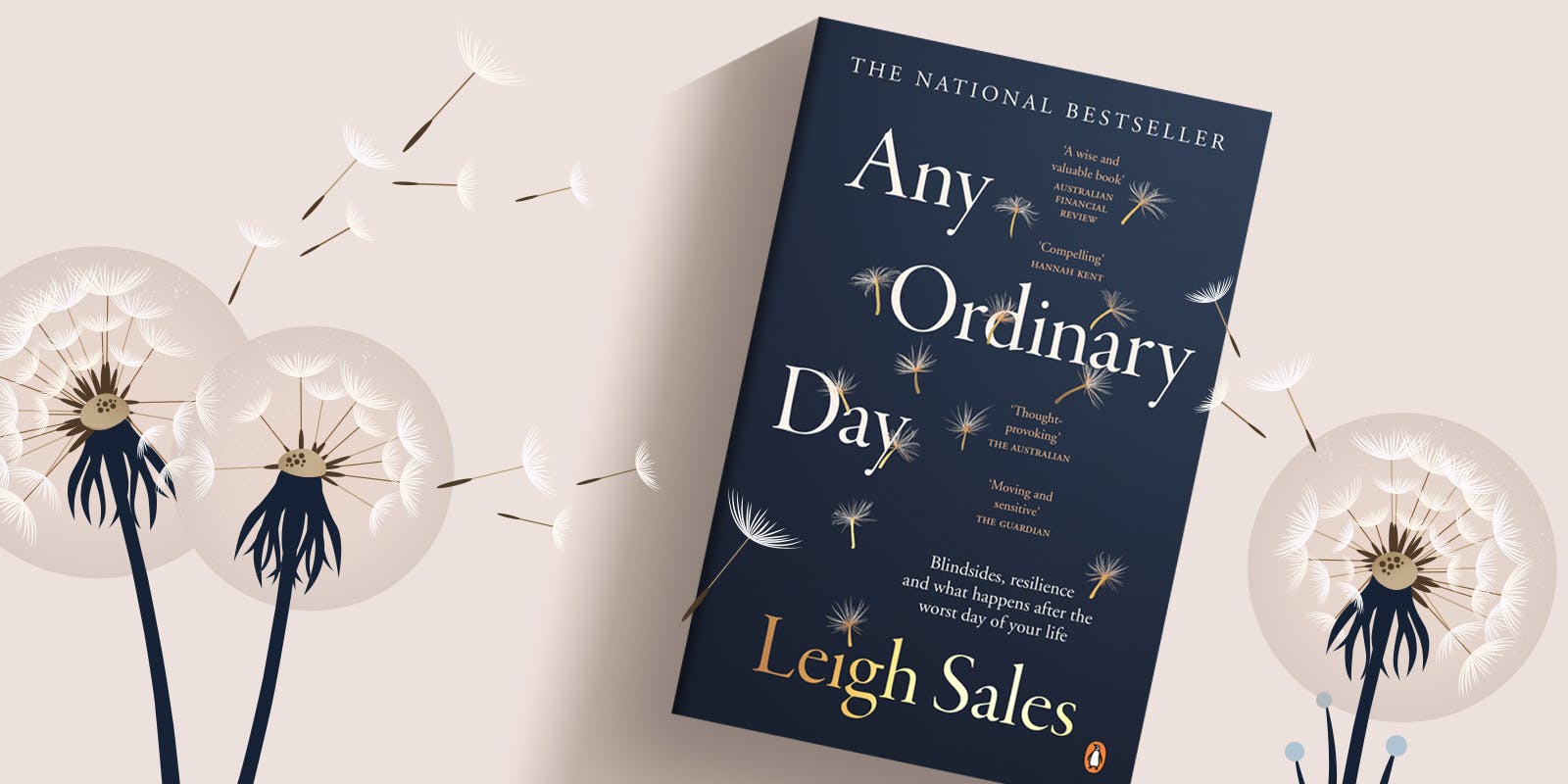 As a journalist, Leigh Sales often encounters people experiencing the worst moments of their lives. But one particular string of bad news stories – and a terrifying brush with her own mortality – sent her looking for answers about how vulnerable each of us is to a life-changing event. What are our chances of actually experiencing one? What do we fear most and why? And when the worst does happen, what comes next?

In her Walkley Award-winning book Any Ordinary Day, Sales shares intimate conversations she’s had with people who’ve faced the unimaginable, and brilliantly condenses research on how we process fear and grief, to explore what happens when ordinary people, on ordinary days, are forced suddenly to find the resilience most of us don’t know we have. In the passage below, Sales marvels at the human capacity for endurance.

After my son’s terrifying birth in 2014, life hadn’t quite finished shaking me by the scruff of the neck. Six weeks later, he contracted viral meningitis and we were back in hospital. Two months after that, another blindside: not my baby, though, but instead his two-year-old brother. His day care centre noticed that his hands had a tremor. There followed years of visits to doctors, hospitals and therapists. My beautiful boy has various medical challenges to navigate, but that is his story and I will leave it for him to tell one day if he wishes. His little brother is now a rambunctious four-year-old who rules the house, defying his perilous arrival. He is developing ‘neurotypically’, which is how I’ve learned the medical profession describes a child I would have previously called ‘normal’.

And then, amidst all of that and when it seemed things couldn’t get worse, my marriage of almost twenty years col­lapsed. It felt as if I must have done something wrong for the universe to turn against me so comprehensively. Like so many others, I too thought: I’m not a bad person, why is this happen­ing to me? I was constantly braced for further grim news, fearing that I was about to lose my job or contract cancer, or that one of my parents would suddenly die. I felt as if I’d been hit by a bus and had staggered to my feet only to be hit by another bus. And then another.

When I started thinking about writing this book, I was fright­ened by what had happened to me, how thoroughly and rapidly my life had been upended. I was also scared of what appeared on my own TV program every night, how fickle and cruel the world often seemed. Mostly I was worried about what might happen to me next. What if something else went wrong? Something even worse? Walk through a children’s hospital or read a newspaper and you’ll realise there’s always something worse.

Lately I’ve noticed among friends and even strangers a desire to stop watching or reading the news. The world seems so unstable and dangerous nearly two decades into the twenty-first century that it’s easier to switch off and watch things that make us laugh or feel good instead of perpetually anxious. I completely under­stand that compulsion to look away, and so it seemed strange to me, as I embarked on this book, that I was choosing to do the opposite, to walk towards pain and suffering, particularly when there had been a modest measure of it in my own life. Now that I know more about how our brains work, I think perhaps it was an effort to impose control. If I could understand the things that rattled me, perhaps I could harness my own rampaging fear.

Even so, at the start of this process I wondered if I were making a mistake; if meeting the people in these pages and asking about the deep blows they’d sustained would finally tip me over the edge. I thought that perhaps all these tragic stories might crush me under their weight and I’d never get out of bed again.

Instead the opposite happened. They’ve given me hope. What people can get through is truly amazing. I have been stunned and inspired by the people in this book.

So often we refer to people like [rescued Himalayan climber] James Scott and [Thredbo landslide victim] Stuart Diver as ‘survivors’. I’m not sure that’s the best word. Survival implies an experience over which you triumphed, as if it’s in the past. In the aftermath of something life-changing, it’s not one event that you must survive, it’s thousands of moments every day. It’s going to the supermarket and seeing everything you don’t need to buy anymore. It’s having to comfort people, fear etched on their faces, when they don’t know what to say to you because being you is the worst thing they could imagine. It’s waking up every morning and knowing that you will never again hear the sound of your little girls’ feet pattering down the hallway or feel their warm bodies squirming next to you in bed. To keep living life after such loss is not survival, it’s endurance. We endure.

Many years ago, the American singer Patti Smith lost her husband suddenly. In 2016 she wrote in The New Yorker that her father had told her soon afterwards that time doesn’t heal all wounds, but it does give the tools to endure them. ‘I’ve found this to be true in the greatest and smallest of matters,’ she wrote. I, too, am finding it to be true. I now know what some of those tools are. I believe in the power of ‘being in the moment’ and no longer dismiss it as a cliché worthy of an eye roll. I understand that the sight of the ocean meeting the horizon, or the sound of a champagne cork popping at the start of a dinner party, or the feeling of trying to stifle uncontrollable laughter at an inappro­priate moment are some of the greatest joys life holds. They are the moments you remember and for which you yearn when times are not so good.

In The School of Life Alain de Botton explores a skillset essential to our modern lives.