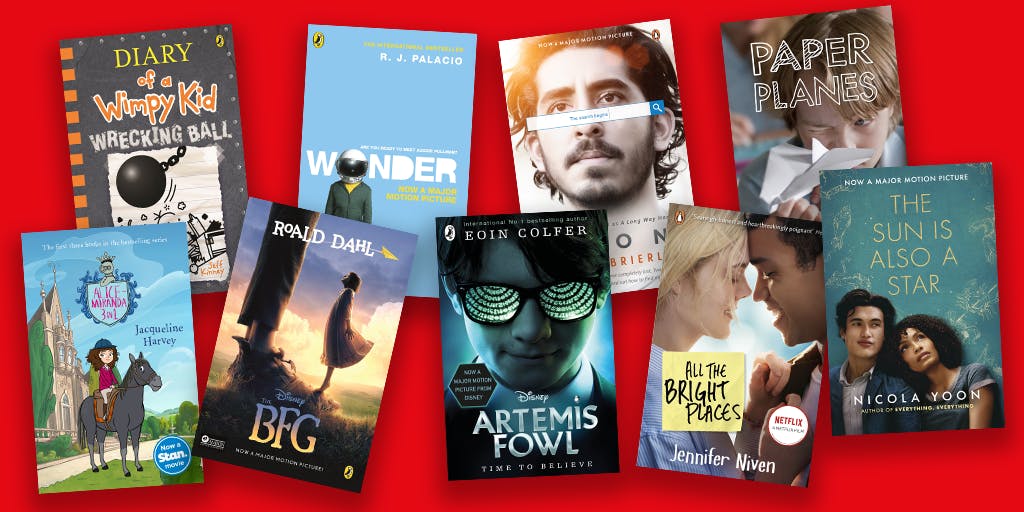 Read the book, then stream these movies and shows

‘Which is better – the book or the movie?’ is an age-old question that we’re just not prepared to answer (although I’m sure you can guess where our bias may lie).

To that end, why can’t we just have both? So many wonderful novels for all ages have made their way to screens small and large, and now is the time to put each version to the test.

Read the book, then head over to your favourite streaming service to see how it all plays out in action. Here are our favourite page-to-screen pairings. 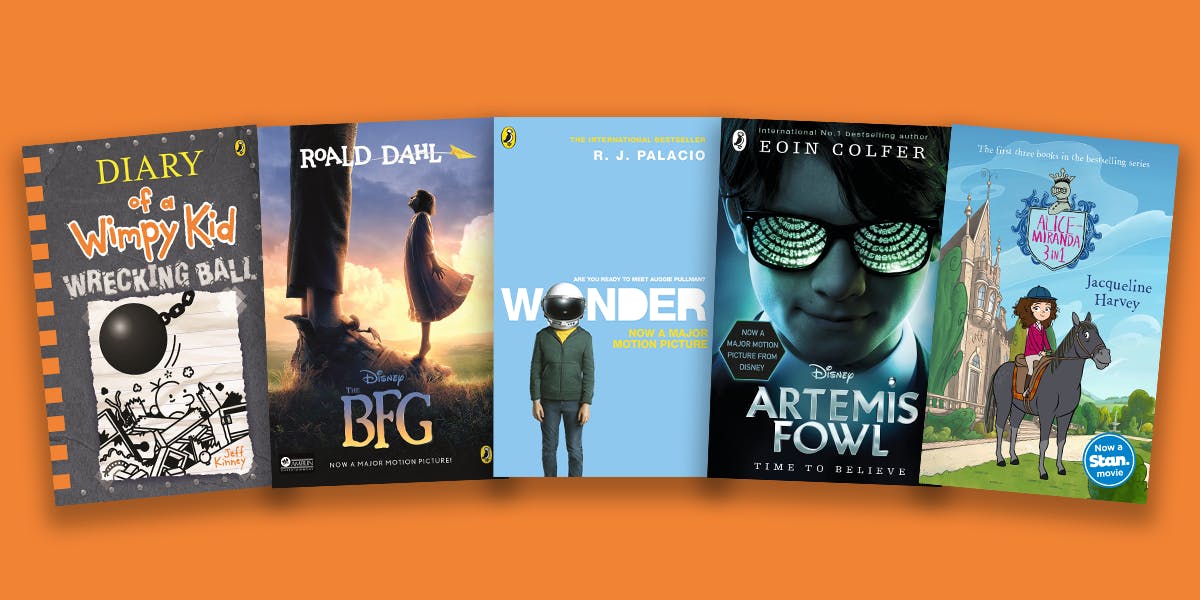 In smashing news, Artemis Fowl is coming to life on June 12, as the movie premieres on Disney+. Based on the first two books in the series, the movie is sure to be gripping and full of twists and turns, and stars movie royalty like Judi Dench, Colin Farrell and Josh Gad.

Discover the book series & add the movie to your list.

Jacqueline Harvey’s iconic schoolgirl heroine has had her life and times chronicled in 18 (soon to be 19!) books. Full of mystery, friendship and, of course, fun, the Alice-Miranda series is beloved around the world by kids and parents alike.

Alice-Miranda received the utmost honour in 2019 when she was immortalised on the big screen. Alice-Miranda Friends Forever is an animated movie that kids 6-12 will absolutely adore. Follow Alice-Miranda as she embarks on her very first day at boarding school, quickly making friends and unravelling a mystery in true Alice-Miranda fashion!

With over 200 million books sold worldwide, the Diary of a Wimpy Kid series needs no introduction. Of course, that’s just a testament to how rip-roaringly hilarious these books are! With 14 Wimpy Kid books currently available (plus the adventures of Greg’s bestie, Rowley), this is the perfect series for kids to get stuck into while stuck at home.

Once you’ve tackled all the books there are FOUR fantastic films available to stream on Disney+. We promise they’re just as giggle-worthy!

Settle in for a poignant story full of heart with R.J. Palacio’s Wonder. The bestselling book follows Auggie, a fifth-grader with a facial disfigurement that’s meant he’s been homeschooled – up until now. He starts conventional school and begins to experience bullying. Moving and ultimately uplifting, Wonder is a must-read for ages 8+ that will help teach empathy and compassion.

When you’ve stained all of the pages of your book with tears, no doubt, give the equally as heart-wrenching film a go. This movie is a great family watch that will leave everyone feeling empowered by their own uniqueness . . . and a little emotional.

Relive this absolute classic about a ‘Big Friendly Giant’ and the little girl he befriends. One of Roald Dahl’s most beloved books, The BFG will transport readers into an entirely new world full of giants, magic and a good-evil struggle with two unlikely comrades at its centre.

The 2016 film is mesmerising, beautiful and warm, ideal for viewers who want to watch the likes of The Hobbit and Miss Peregrine’s Home for Peculiar Children but might not be ready just yet. 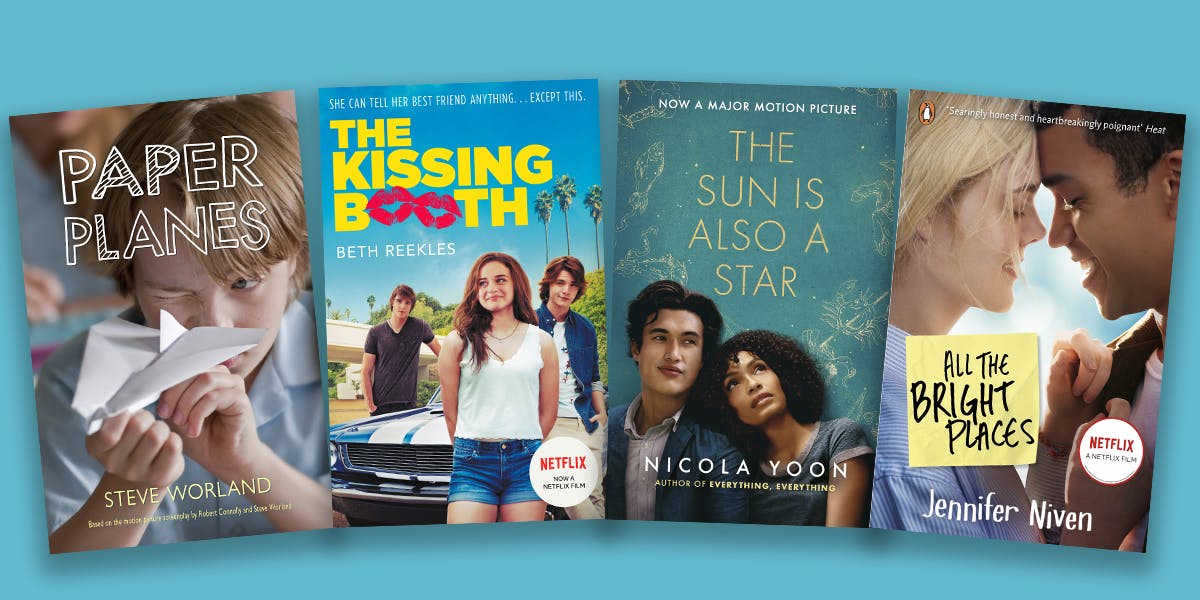 Consume some true blue Aussie content with Paper Planes, an award-winning novel and film, both by Steve Worland. 12-year-old Dylan is full of imagination, and is an expert paper plane-maker – so when he discovers there’s a World Paper Plane Championship, it’s on! This story of perseverance is suited to young teens, but also makes a great read aloud for younger ones.

The movie, starring Sam Worthington, Deborah Mailman and David Wenham, won two AACTAs and is a wonderful watch for the whole family – break out the popcorn, sit back and relax!

Beth Reekles' The Kissing Booth is a sweet YA romance for fans of John Green and Krystal Sutherland. Elle Evans is pretty and popular, but she's insecure about one thing – she's never been kissed. When she sets up a kissing booth for the school carnival, having her first kiss isn't on her mind, until bad boy Noah puckers up! The two polar opposites embark on a whirwind romance, but will it end in flames?

The Netflix Original movie has proven to be a smash-hit, and stars up-and-comers Joey King and Jacob Elordi. It's the perfect movie for a rainy afternoon or cold, snuggly night in. PS, diehard fans – book two is already out, and the movie is on its way later this year.

The Sun is Also a Star – Stan

Tackling big themes like immigration, deportation and chasing what you want, Nicola Yoon's The Sun is Also a Star is a thoughtful love story between two New York City teens, one of whom's about to be deported to Jamaica. Will the stars align for them, or is fate too good to be true?

The stunning film is available to stream on Stan, and stars Riverdale's Charles Melton and grown-ish's Yara Shahidi.

All the Bright Places – Netflix

Jennifer Niven’s much-adored YA novel, All the Bright Places, follows two teenagers both struggling with their own demons – Violet is plagued by survivor’s guilt after her sister’s death, and Finch has bipolar disorder and suicidal ideations stemming from his abusive father. One fateful day, they both climb their school’s belltower, planning to jump – neither expecting the other to be there. What ensues is a beautiful yet harrowing story of love, friendship, loss and finding connection.

All the Bright Places has recently received the Netflix treatment, with a film coming out in early 2020 starring Elle Fanning and Justice Smith. 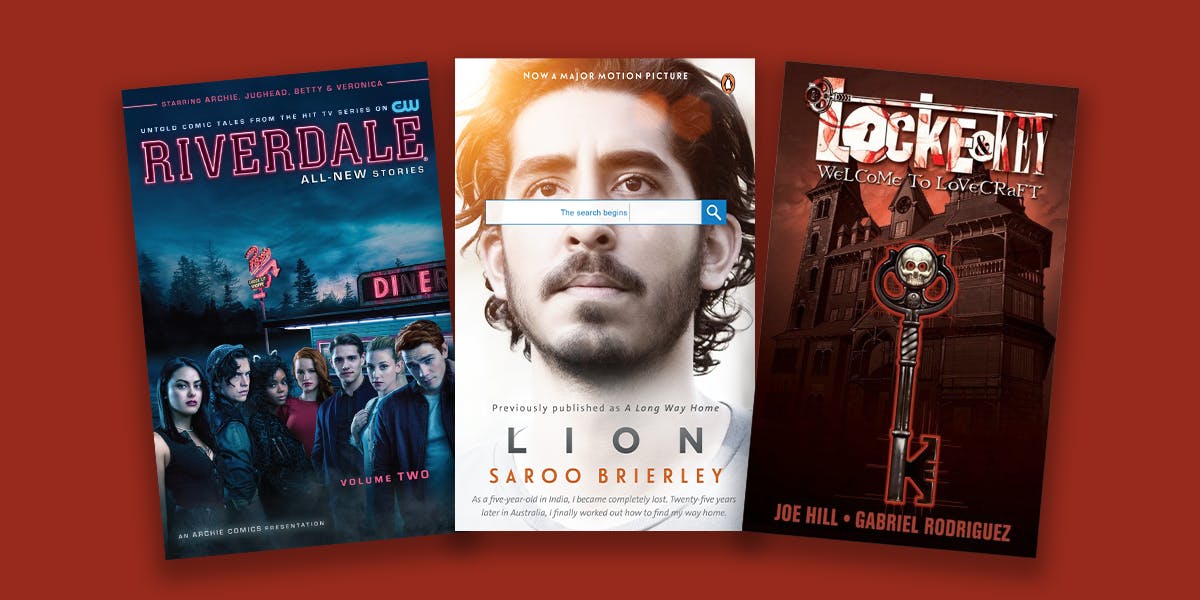 Popular amongst both adults and older teens (although viewer discretion is advised), Riverdale has become one of Netflix's most-streamed shows in the few years since its premiere. Full of dark drama, lust, romance and mystery, it's insanely addictive – we dare you not to get hooked!

But, did you know that Riverdale is based on the original Archie comics? If you've already seen the show, why not give them a go? There's both the original comics and the all-new graphic novels inspired by the show to devour, so your at-home content is positively set.

Discover the books & stream the show.

Available in both an adult and young readers' edition, Lion is the incredible true story of Saroo Brierley, who was adopted by an Australian family after being found wandering, lost, on a train in his native India. Flash forward twenty years, and Saroo is content, but restless – and curious about his origins. He embarks on a journey to find his mother, which takes him back to India and into an entirely new, unknown world.

The 2016 film, nominated for six Oscars, stars homegrown talent Nicole Kidman as well as Dev Patel and Rooney Mara. Sit down and be immersed in this triumphant tale of discovering who you are and where you come from.

Another show inspired by a comic series, Locke & Key follows the Locke family as they return to their ancestral home following their father's grisly murder. Siblings Tyler, Kinsey and Bode slowly begin to notice that the sprawling, gothic mansion – Keyhouse – isn't what it seems, and conceals many a hidden secret. A gripping fantasy story ensues, and guarantees readers will be on the edge of their seats.

All of the magic, wonder and mystery of Locke & Key is captured on screen in the new Netflix series, which is just as thrilling as the comic series. A perfect after-work binge to help you escape reality just a little bit.

Note – this is another one that will also appeal to an older teen audience, with viewer discretion recommended.

Discover the comics & stream the series.

What's your book and movie pairing of choice? Whatever it is, we're sure that Netflix subscription is about to get a workout.

If your TBR pile is looking empty (while your Netflix queue continues to accumulate), be sure to check out What you should read next based off your fave Netflix shows.

How well do you know Artemis?

Artemis Fowl is a 12-year-old criminal mastermind. With this hit series coming to Disney+ there’s never been a better time to dive into his nefarious world. Read the book, watch the movie then see how you stack up with this masterful quiz.