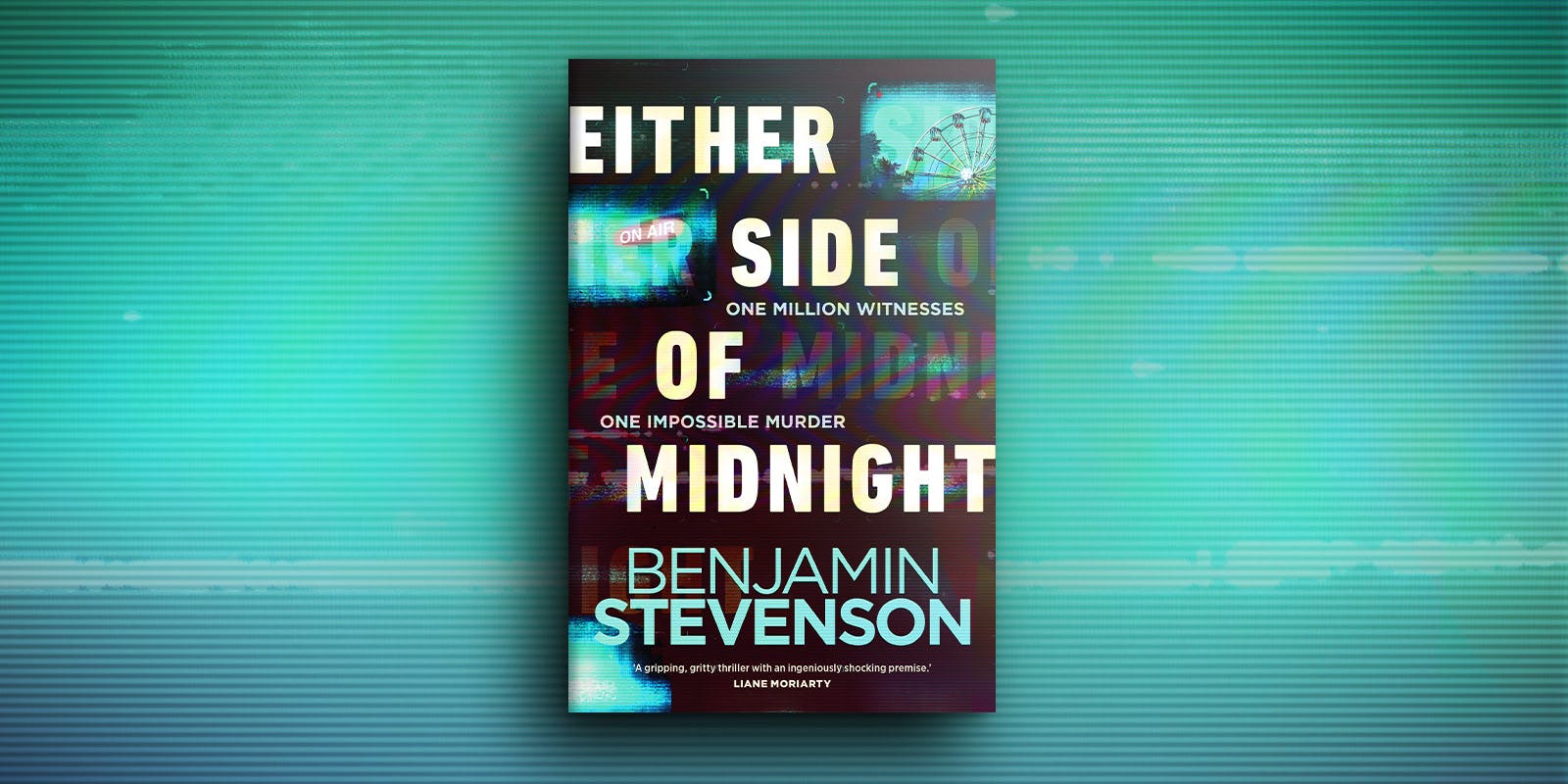 What’s the first story you remember writing?
When I was around ten, I wrote a story called Not Expecting Doom, about a family who had monsters in their basement and were, as it happens, not expecting anything doomy to happen. Spoiler alert: it did. I remember bragging to my parents that I’d written a ‘full-length novel’ but I also recall increasing the font size on one page to size 120 so one character could scream 'ARGH!' and adding about 500 oh’s to someone screaming ‘Noooooooo’ to reach the illustrious page limit of 15 pages. I still think ‘doom’ is a great word though.

Can you tell us about discovering the seed of Either Side of Midnight?
I’d seen a news piece about Christine Chubbuck, an American television host who committed suicide live on air, and it stuck with me for a long time, but I just couldn’t figure out how to turn it into a crime novel. I’ve been on and around television sets plenty in my career, and I suddenly saw this scene playing out where I’m seeing how the crew is reacting to it. But it was such an incredulous scenario, I couldn’t see where it would go from there. But the more I looked into it, the more pervasive this kind of thing seemed, there are some horrible scenes playing out on broadcasting systems, things like Facebook Live, Twitch, or television broadcasts. It’s strange how this could be so public and yet talked about so little. I started to see how this could turn into a murder case, and from there I was off.

It’s a bold premise: opening a book with a 'suicide’ on live TV. At what point did you realise this was the beginning?
I have two answers, one is boring and analytical, and the other more artsy-fartsy.

The artsy-fartsy version is that I struggled with opening with this as it is so dramatic. I found while working through the first draft of the novel that it was difficult to know if I could top it (because I always try to start with the second-best scene first, and finish with the best scene). So lots of questions surfaced: should it be a flashback later in the book? Is it too jarring straight off the bat? Is it just too much? In the end, there was just no other way to open the book, this scene had been playing in my head for months. I think it starts the book off running and will stay in people’s minds.

The boring technical version is that the opening scene takes place in a secondary character’s head, so really the only perspective swap I could make, without pulling the reader out of their immersion, was in the prologue if I wanted to be 'on set' for the television show in such detail, as my main character can’t be at the crime scene before it happens. If you want the real behind-the-scenes answer!

What did you learn while writing this book?
From the themes of the book I learned the power and danger of words, and a lot about mental health, as well as ethical responsibilities and dangers in our constantly broadcast world, both social media, and fiction. If everything’s available and accessible, it means everything is available and accessible. That’s a scary thought.

In what ways was writing Either Side of Midnight different to your debut?
I promised myself I wanted to write a more straightforward plot, however I somehow landed in an even more complex plot! This novel has fewer characters and was more tied into one specific theme, which I think helped this one feel faster paced and more streamlined.

Writing this one was also different because the more modern elements were literally keeping pace with the news cycle as it happened, I was writing about laws that hadn’t been written yet or crimes that were only really just starting to be committed, and so I had to adapt elements of the plot/research to fit the current world.

You’re also a comedian: what’s the appeal of thrillers?
Thrillers and jokes are exactly the same – they both rely on the element of surprise. So a thriller is just a long, complex joke where you’re trying to hide the punchline from the reader for as long as possible. Most comedians also have very dark senses of humour, and I think that helps inject some black humour into my books.

In terms of novels specifically, I have a lot more time to think and talk about what I want to say with each book, and I can be more serious in a way that keeping the laugh rate up in a comedy club doesn’t allow for. So I find writing novels, creatively, like being let off the leash.

A piece of writing advice that’s resonated?
It’s not really writing advice, but there’s a story about the 1994 action movie Speed (you know, the one with the bomb on the bus) that a studio executive said the script had 'too much bus' in it. I find it hilarious. But I also think it has two valuable contradictory messages: one, that no matter what you do, some people just won’t get it; and two, no matter how good your concept is, sometimes maybe it is useful to stop and think 'is there too much bus?'

A book you loved as a child (and why)?
I really loved the Deltora Quest series by Emily Rodda because I thought they were adventurous and exciting. It’s strange that now as an adult I don’t read much adventure fiction anymore, but I remember really loving those books. I also gobbled up the Goosebumps books.

A thriller author you return to (and why)?
In this and every interview until the end of time I recommend Scott Smith, who wrote A Simple Plan, which is a Fargo-esque thriller. I also enjoy re-reading Gillian Flynn’s novels, like Gone Girl, as I think there are heaps of layers.

A thriller you recommend to friends (and why)?
I’m not going to name local Aussie crime writers because it feels like playing favourites – but literally every single one of them.

Recently I loved The Seven Deaths of Evelyn Hardcastle by Stuart Turton, it’s weird and crazy and one of those books you need to talk about with other people, so I’ve been forcing people to read it.

A favourite crime/thriller classic (and why)?
How old does it have to be to be a classic? I’ll say The Broken Shore by Peter Temple. Juicy and atmospheric.

Scariest book of all time?
The Road by Cormac McCarthy. The scariest books are those that are terrifying on a deep, humane level, and this one stuck with me because the scares come from what people can do to one another.

What scares you?
Existential questions in short-form Q&As? This sounds lame, but I am always afraid that what I’m currently working on will not be as good as what I’ve already done. That’s a good fear, though, it’s the flutter you have while waiting in the wings before walking out on stage, or facing a blank page, that forces you to be better.
In terms of solid fears, I am terrified of sharp things near people’s eyeballs. Mine or other people’s: any film where something pointy gets too close to an eye I’m a quivering heap.

Either Side of Midnight Benjamin Stevenson

An electrifying thriller from an exciting new voice in crime fiction: One million viewers witness a popular TV presenter commit suicide live on air - so why is his twin brother convinced it was murder?