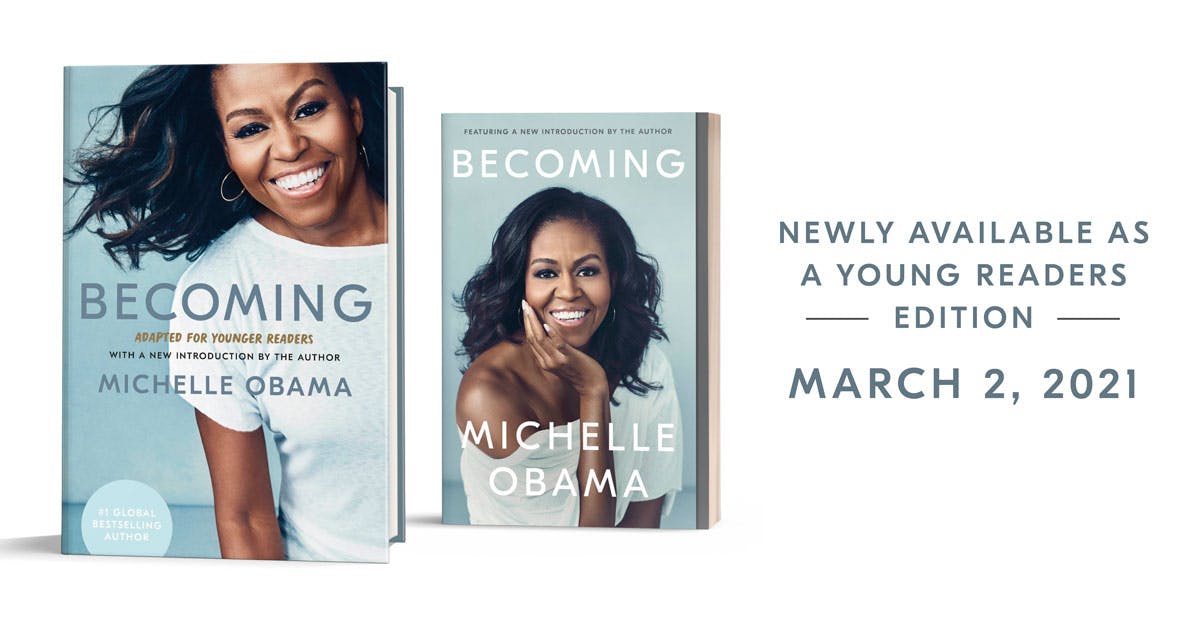 Sydney (February 4, 2021) – BECOMING, the #1 international bestselling memoir by former First Lady of the United States Michelle Obama, will be published in a new edition by Penguin Random House Australia on March 2, 2021.

A Younger Reader edition, adapted for children ages 10 and up and featuring a special introduction by the author and three full-colour photographic inserts, will be released in hardcover by Puffin, an imprint of Penguin Random House Children’s. The Younger Reader edition will carry a suggested list price of $29.99.

With the Younger Reader edition of BECOMING, Michelle Obama tells her full story for a new generation with the honesty and candor that is her trademark. In sharing her joys and triumphs alongside the bumps, bruises, and challenges she has encountered along the way, Mrs. Obama invites readers to realise that no one is perfect, and that the process of becoming is what matters, as finding yourself is ever evolving. In telling her own story with boldness, she asks young readers: Who are you, and what do you want to become?

As Mrs. Obama writes in her introduction to the Younger Reader edition, “Growing up on the South Side of Chicago in the 1960s and ’70s, my parents, Fraser and Marian Robinson, always kept it straight with me and my brother, Craig. They never sugarcoated hard truths or presented their reality as anything other than what it was—because they knew we could handle it. I want to give you all that same respect.

“So my promise to you is to give you my story in all its messy glory—from the time I struggled in front of my kindergarten class, to my first kiss and the insecurities I felt growing up, to the chaos of a campaign trail, to the strange experience of shaking hands with the Queen of England. . . . I hope that as you’re reading my story, you’ll also think about your own—because it’s the most beautiful gift you’ll ever have.”

The hardcover release of Michelle Obama’s BECOMING in 2018 was a global publishing event. Michelle Obama invited readers into her world for the first time, chronicling the experiences that have shaped her—from her childhood on the South Side of Chicago to her years as an executive balancing the demands of motherhood and work, and from her time spent in the White House as First Lady of the United States to her transition back to life as a private citizen. Critically acclaimed for its striking candor and honesty, the book was selected as an Oprah’s Book Club pick and received an NAACP Image Award, selling more than 15 million copies worldwide in all formats. The hardcover edition has appeared for more than 100 weeks on the New York Times bestseller list. The audiobook edition, read by Mrs. Obama, received the 2020 Grammy Award for Best Spoken Word Album, and a documentary chronicling Mrs. Obama’s unprecedented 34-city stadium book tour received international critical acclaim when it premiered on Netflix in May 2020.

While in the White House and in the years since, Michelle Obama has become an extraordinary role model, particularly for women and girls, and this new edition of BECOMING offers a unique opportunity for readers, young and old, to have a shared dialogue based on her timeless and honest wisdom.

The BECOMING Younger Reader edition will simultaneously be published in The United Kingdom, New Zealand, South Africa and India by Puffin; in the United States and Canada by Delacorte Press, an imprint of Random House Children’s Books; in Germany by Penguin Junior; in Brazil by Companhia das Letras; and in Spain and Latin America by Montena, an imprint of Penguin Random House Grupo Editorial, with a Portuguese edition to be released by Nuvem de Tinta later that month.

Michelle Robinson Obama served as First Lady of the United States from 2009 to 2017. A graduate of Princeton University and Harvard Law School, Mrs. Obama started her career as an attorney at the Chicago law firm Sidley & Austin, where she met her future husband, Barack Obama. She later worked in the Chicago mayor’s office, at the University of Chicago, and at the University of Chicago Medical Center. Mrs. Obama also founded the Chicago chapter of Public Allies, an organization that prepares young people for careers in public service. The Obamas currently live in Washington, D.C., and have two daughters, Malia and Sasha.

Puffin is the biggest children’s publisher globally and inspires children to dream big by being a loud, proud voice for the power of stories and how they can spark imagination. It is an imprint of Penguin Random House UK, the world’s number one publisher representing a vibrant community of publishing houses marked by unparalleled success.

A younger reader's edition of the number-one bestselling memoir by former first lady of the United States, Michelle Obama. With a new introduction from Mrs Obama herself