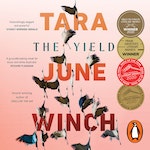 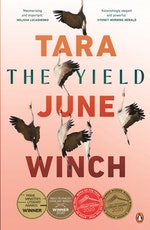 Shortlisted for the VPLA.

Shortlisted for the Stella Prize.

Just tell the truth and someone will hear it eventually.

The yield in English is the reaping, the things that man can take from the land. In the language of the Wiradjuri yield is the things you give to, the movement, the space between things: baayanha.

Knowing that he will soon die, Albert ‘Poppy’ Gondiwindi takes pen to paper. His life has been spent on the banks of the Murrumby River at Prosperous House, on Massacre Plains. Albert is determined to pass on the language of his people and everything that was ever remembered. He finds the words on the wind.

August Gondiwindi has been living on the other side of the world for ten years when she learns of her grandfather’s death. She returns home for his burial, wracked with grief and burdened with all she tried to leave behind. Her homecoming is bittersweet as she confronts the love of her kin and news that Prosperous is to be repossessed by a mining company. Determined to make amends she endeavours to save their land – a quest that leads her to the voice of her grandfather and into the past, the stories of her people, the secrets of the river.

Profoundly moving and exquisitely written, Tara June Winch’s The Yield is the story of a people and a culture dispossessed. But it is as much a celebration of what was and what endures, and a powerful reclaiming of Indigenous language, storytelling and identity.

Tara June Winch is a Wiradjuri author, born in Australia in 1983 and based in France.
Her first novel, Swallow the Air was critically acclaimed. She was named a Sydney Morning Herald Best Young Australian Novelist, and has won numerous literary awards for Swallow the Air. A 10th Anniversary edition was published in 2016.
In 2008, Tara was mentored by Nobel Prize winner Wole Soyinka as part of the prestigious Rolex Mentor and Protégé Arts Initiative.
Her second book, the story collection After the Carnage was published in 2016. After the Carnage was longlisted for the Victorian Premier’s Literary Award for fiction, shortlisted for the 2017 NSW Premier’s Christina Stead prize for Fiction and the Queensland Literary Award for a collection.
She wrote the Indigenous dance documentary, Carriberrie, which screened at the 71st Cannes Film Festival and toured internationally.
The Yield won the Christina Stead Prize for Fiction, the People's Choice Award and Book of the Year at the 2020 NSW Premier's Literary Awards. 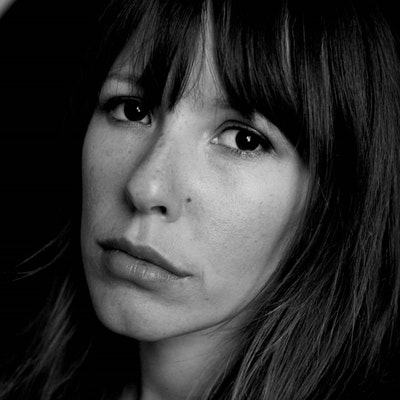 Praise for The Yield

“A groundbreaking novel for black and white Australia.”

“Take courage when you read this book. You'll need it. Winch asks big questions of this country. Is the answer within us?”

“It’s a fictional scenario which provides a breadth and depth of possibilities that Winch takes full advantage of—and the result is a work of dazzling originality, in structure, language, and intent. Quite simply, nobody has written anything quite like this before.”

“The Yield sings up language, history, home, blood - all the important stuff”

“A work of immense scope and sensitivity.”

“A beautifully written novel that puts language at the heart of remembering the past and understanding the present.”

“Nothing short of a landmark Australian novel, simultaneously timeless and yet urgently a story for now, with sentences that’ll knock the wind out of your gut.”

“The Yield is a bleak and beautiful book that eloquently phrases the weight of history, with an ultimately uplifting sensibility at its heart: that of the power of storytelling across thousands of years.”

“Winch’s urgent novel is a chance to listen. A moving and evocative story of Aboriginal Australia. Hope shines through this contemporary novel of a culture dispossessed and the importance of preserving language. Winch is a Wiradjuri author and here she writes about the Wiradjuri language which was once thought to be extinct but has now been preserved. The Yield is current, timely and an important must-Read for all Australians.”

“So, so beautiful – and like nothing I've ever read. Wiradjuri author Tara June Winch is incredible. There are passages of sublime prose; sentences that shook me and took me new places; and parts that made me bawl for everything that has been and is being lost, stolen and damaged for First Nations people in Australia. The Yield follows the story of August who, after spending years overseas, returns to find her ancestors’ land – her family’s home – being repossessed by a mining company. The words of her grandfather, Albert Gondiwindi, weaved through August’s story, make this book a must-read! Albert’s dictionary is a masterpiece and some of the most moving prose I’ve read. You might know Tara June Winch from her first novel, Swallow the Air, which won several Australian Literary Awards and is a firm staff favourite at Better Read Than Dead. The Yield is my favourite Australian book this year – and it might be yours, too!”

“This is a big hearted, hopeful book. More hopeful, maybe, than we deserve.”

“A delicate story of great power”

“I just finished this book and it is ABSOLUTELY extraordinary. Intensely moving, gripping, brutal and yet so full of generosity. I learned so much esp about the lyrical Wiradjuri language. Brilliant.”

“The Yield uniquely and powerfully shows how revolutionary a shift from an imported language to an Indigenous language might be ... such aesthetically and ethically ambitious writing. Reap the wisdom this book yields.”

“And The Yield is about stories – those we tell ourselves, those that are told about us, those that disempower and help us survive. And it's about language, its magical ability to capture a spirit, reveal a culture and allow us to revisit the past.”

“The Yield is the work of a major talent. It hypnotises with its lyricism, with the juxtaposition of horror and hope, and the candid look at family, country and history. It’s a work to be savoured, to be enjoyed in the sun on a winter’s day, and then to be shared—as widely as possible!”

“This is an astonishingly elegant and powerful second novel.”

“Wiradjuri writer Tara June Winch is not afraid to play with the form and shape of fiction. Three different voices narrate The Yield in bite-sized chapters: dictionary maker and elder Albert Gondiwindi, his granddaughter August, and nineteenth-century missionary Reverend Greenleaf. It takes some time to get used to this structure, but ultimately it is rewarding. Winch is highly skilled at creating portraits and at moving us forward into space. These are not static images. Refreshingly, the characters in The Yield are capable of communion, humour, and dignity despite tragedy, sexual violence, and substance abuse. In this deft novel of slow-moving water, they are borne by love, not pity.”

“A fierce and lyrical novel about language and identity.”

“I was deeply moved (and angered) by Tara June Winch's The Yield, a novel about the endless losses endured by a close-knit Indigenous community, whose members are expected to somehow both struggle and thrive under the threat of yet more loss and theft - of artefacts, of language, of land.”

“Tara June Winch’s The Yield gathers up family, Country, and spirituality, blanketing one part of rural Australia in Indigenous history and language in an impressive rebuking of loss and colonialism.”

“The Peoples, languages and wildlife of Australia have been purposely decimated for a great many years. The history of this vast land is a tragic one and this young Indigenous author has taken it on in a graceful act of retrieval and witness. The dictionary and use of Wiradjuri words is transporting. Birrabuwawanha - to return, to come back. The Yield is a fine novel, and one not without hope.”

“The Yield is a ground-breaking and wholly original work of fiction by one of our most exciting contemporary writers. Winch plays with form, shape, style, perspective and point of view in order to conjure three very distinct voices that speak to the past, present and future of our nation: Albert Gondiwindi, his granddaughter August and the nineteenth=century missionary Reverend Greenleaf.”

“The Yield is a ground-breaking and wholly original work of fiction by one of our most exciting contemporary writers. Winch plays with form, shape, style, perspective and point of view in order to conjure three very distinct voices that speak to the past, present and future of our nation: Albert Gondiwindi, his granddaughter August and the nineteenth-century missionary Reverend Greenleaf. Albert’s story is told in the form of a dictionary he writes, a dictionary which reclaims his own history and the language and stories of Indigenous people on the banks of the Murrumby River at Prosperous House, on Massacre Plains. After her grandfather passes away, August returns home and is compelled to confront a painful familial and colonial history from which she had taken flight. These two stories are threaded through with the Reverend’s anguished letters, letters that chart his paternalistic ambitions, the violence he witnesses against the Indigenous people and the complexity of being both an agent of colonialism and someone trying to do the right thing. The Yield makes a powerful argument about the urgency of revitalising Indigenous language. It shows how stories, whether personal or national, can be embedded in a single word and how much we risk losing when we don’t know what those words are any more. It shows how language is a lens through which we can understand the story of a people and culture dispossessed while simultaneously celebrating what can and does endure.”

“The Yield is the second novel from award-winning Wiradjuri author TARA JUNE WINCH who published the much-lauded Swallow the Air in 2006. It tells the story of August, a young woman returning to her family home on Massacre Plains after the death of her grandfather, Albert Goondiwindi. She discovers that Albert had begun to write a Wiradjuri dictionary before his death, and almost a third of The Yield is taken up with this dictionary and the cultural knowledge it contains. August also finds herself in the midst of a battle against a mining company that wants to build a mine in Massacre Plains. Winch evokes the grief not only at the loss of her beloved Poppy, but also at the loss of language, culture and identity that the dictionary reveals but also promises to revive. The Yield, which won three prizes in this year’s NSW Premier’s Literary Awards, is a poignant story of personal and cultural reclamation and survival.”

Download The Dictionary of Albert Gondiwindi from The Yield to accompany the audiobook here. Language Is Life
In The Yield, Tara June Winch explores how every word is embedded with stories.
Article

Yindyamarra (Respect): Say it out Loud
Tara June Winch discusses the creation of her 2019 novel The Yield, and the power embedded in Indigenous language.
News The Yield Shortlisted for the Victorian Premier’s Literary Awards 2020
Winners will be announced on 30 January 2020.