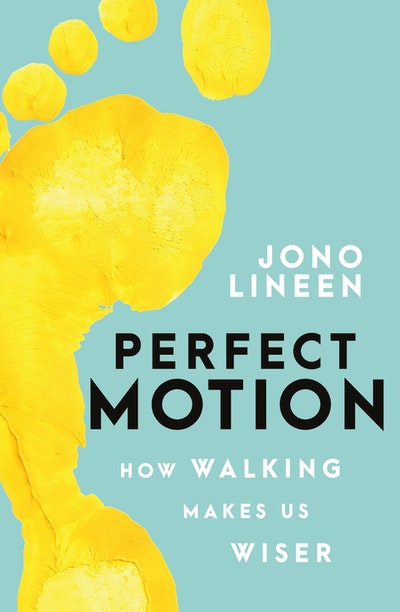 How walking makes us wiser

I walk, therefore I am

I rise. I rise and take my place between the earth and sky. Standing tall on two legs, chest high and chin up, I breathe and let the world in. I am a pillar, a receptacle and a witness to the world.

My lungs relax and release, mountain air whistling over chapped lips. As my balance shifts, I fall forward towards a stony track, and for the blink of an eye my foot swings and I’m caught between two hemispheres of motion, left and right, floating in equilibrium. Here is where the constancy lies, always present, but hidden – the still point between kinesis and stasis. Then the nudge of evolution transfers my gravity and I roll into another stride. My footsteps quicken as I head towards the snow-covered pass, but I have no fear of falling because infinite repetition has instilled in me the confidence of ages, and I move easily into the flow of a steady walk.

This is the magic of beginnings. Here I am at the start of a 2700-kilometre trek through the Western Himalayas. My steps continue, one, two, one, two, tension and compression. There’s a subtle rhythm to the married tip-tap of feet and heart, a measured swing as legs and arms undulate through space and time. The movement transforms me from witness to actor, from observer to participant. To move, to activate this charged body, is to take control. To be dynamic and engaged is to create my own reality.

Footstep after footstep, each piece of walking’s moving puzzle is laboured and dangerous. One misstep, an overcorrection, and I am on the ground with bruises. But this deft sequence of connected stumbles, a sine wave of human motion, has the grace of peril about it. Back and forth and onwards, the reel and throw of feet, hips, shoulders, head and hands all combine to create our species’ most fundamental dance: walking.

These elegant steps – and every one of them is a masterpiece – are a portal into our antiquity; this towering movement is sheer audacity. The thought that our distant ancestors decided it was a good idea to stand on two legs, shift their weight and move forward shimmers with brilliance. There was both madness and genius in that first person rising to their hind legs to snatch a piece of glowing fruit, and then shuffling two paces more to grab another.

The madness lies with the vulnerability that two-footed locomotion exposes us to, not just in the environment but with friends and foes. Other animals stay on four legs and protect their soft underbellies, but genus Homo stood tall and walked upright, face-first into the future, heroic before the challenge. One, then two, three, then entire families recognised the crazy wisdom of rising up, and shed their fear of being unguarded, because great art, great decisions, great ideas always open us up to the worst and best.

To move ahead you must be tested, to walk strong you can’t be afraid; you need the confidence of believing you won’t tumble and have a sabre-toothed tiger rip the heart from your bared chest. It has taken 5 million years of falling and rising for us to become who we are, but we have persevered, and in that persistence lies the accumulation of ingenuity that is at the core of our progress.

Walking is what we are made to do. Our development into bipedal animals is an event coded so deep within us that although it can be easily ignored, it is impossible to forget. Everything about how we function in this world, from our cognition to the way we breathe, eat, move and procreate, even how we defecate, is built around a two-legged body that has pulled itself up off the ground and spent a hundred thousand generations perfecting how we interact with other humans and this planet.

It was the tragic death of my little brother in a terrible boating accident that eventually led me to embark on that four-month Himalayan traverse. I began the trek uneasily, strangely unaware of just how deeply Gareth’s passing had affected me, and in that state of unrealised loss I threw myself into the journey. I walked six to ten hours at a stretch, 40 kilometres a day, seven days a week. I walked until my legs ached and my feet blistered.

Day after day, month after month I kept walking, and by the time I reached the Mahakali River, the border between India and Nepal, and the end of the trek, something had changed in me: the fog that shrouded me since Gareth’s death had lifted. I wasn’t healed, I still yearned for his presence, but I had become stronger, psychologically and emotionally. Honour and trust had crept back into my life. One stride to the next had become simply about pure movement, the wonder of being, the ecstasy of doing, the joy of adventure.

How had this transformation occurred? For years afterwards I strove to understand what had brought about this shift in perception. I became obsessed with finding the element that stitched environment, people and enchantment together. I considered each factor separately – the geography, the culture, the religion – but none could explain the mystery. Finally, it dawned on me that the answer lay in the simplest part of the equation, the thing I had connected with unconsciously, but so deeply: walking. I came to recognise that the very act of placing one foot in front of the other, over and over again, had shifted something in me and facilitated my acceptance of the way things were.

How could something so simple have changed my life so dramatically? I began to investigate humankind’s primal motion and was surprised at how many writers, artists, philosophers, scientists, businesspeople and world leaders incorporated walking in their daily routines. Just about every major thinker has understood, consciously or unconsciously, that our most basic movement is a key to unlocking hidden powers. Jesus, Buddha and Muhammad wandering in the wilderness. Aristotle treading the peripatos with his students. Jean-Jacques Rousseau stating, ‘My mind only works with my legs.’ Beethoven and Goethe walking and talking on the streets of Tieplitz. Dickens on his thirty-mile jaunts to the far edges of London. Jane Austen and her sisters tramping the Hampshire downs. Darwin religiously marching his sand track at home in Kent. Wordsworth’s thousands of poetic miles through the Lake District. Queen Victoria in the Highlands of Scotland. Henry David Thoreau using his feet as a form of civil disobedience. Einstein on the hills above Zurich. Virginia Woolf marching Bloomsbury’s streets. Gandhi striding the length and breadth of India. Churchill walking with destiny. Kerouac, Snyder and Ginsberg trekking the wilds of the Sierra Nevada. Peter Matthiessen traversing the Himalayas. Marina Abramovi´c pacing the Great Wall of China. Steve Jobs’ walking meetings around Palo Alto.

Walking appears again and again when we examine outliers and originals, their lives and creative processes. But it isn’t just with historic genius that we observe this connection between bipedalism and creativity. How often, in a time of stress, have you said to yourself, ‘I’m going for a walk to clear my head,’ and you’ve set off on a stroll around the neighbourhood or through a park near work and found within minutes that the issue that has been getting under your skin – a tricky professional problem or a family conflict – starts to unravel and reveal itself as something that can be resolved. The truth is that there are biochemical reasons why walking helps you regain perspective on life.

How about when you’re walking or running and you find that, over time, your body and mind feel more at home, you seem to drop into yourself? You get home and there’s a glow about you; you look at your family afresh and the world is just a little better than when you left. Neuroscience can explain that feeling.

Have you ever been involved in an intense class or seminar, the information stacking up, PowerPoint after PowerPoint, charts and figures, graphs and lists, and you come out of it shaking your head and thinking, ‘What was that all about?’ But then lunchtime rolls around and you go for a wander and the pieces of that knowledge-laden puzzle start to click into place. Yes, there are psychological explanations for that too.

These examples point towards the power of walking and running to help us learn, to alter our perception of time and space, and to heighten our capacity to problem-solve and create the stories that frame our lives. Walking and running are infinitely more than just a means for getting from A to B. Walking is a stimulus and a medium for our cognitive development: we grow wiser through walking, which has influenced and accelerated humanity’s creative capacity and thus our evolution.

Walking is also intrinsic to our perception of the world. Through our body’s ability to interpret and adapt to our environment, we understand the world and our place in it. The past fifty years have seen a serious reconsideration of Cartesian dualism, with the realisation that our bodies and minds are not separate entities, but interdependent engines of the human experience. The walking body is our active interpreter of reality.

Walking has even helped shape the narrative structures through which we understand our trajectory in life. Our earliest stories are, for many, the toddling expeditions we made as two-year-olds across the back gardens of our childhoods. Our most basic and enduring narrative arc is based on just such journeys; for 5 million years all literal journeys were taken on foot. We walk into our story.

With those steps we cultivate spaciousness, and through that openness we grow into ourselves. From the toddler’s staggered push off the easy chair and out towards the coffee table, to the first sprint to goal with a ball at your feet, to that initial shy stroll with the one you love, to the clutch of your child against your heaving chest as you walk them to sleep, even those last ultimate steps towards the great unknown – walking is joy, and we all have the capacity to tap into that essence.

Walking is much more than just putting one foot in front of the other – we all sense that – but it has taken me years of research and contemplation to attain the understanding needed to give those feelings a life on the page. Walking is a framework, a catalyst and a medium out of which human life on earth has evolved. Fundamental to that is how creativity is the cornerstone of evolution, and walking has been elemental in that progression.

Today we need walking more than ever. As our lives become increasingly hurried and ever more complex, it is comforting and empowering to know that going for a walk – especially a mindful stroll, conscious of humanity’s multi-million-year connection with the activity – brings us into contact with our history as the earth’s most evolutionarily successful species. Walking is what we are made to do; it is our perfect motion.

A riveting exploration of the remarkable power of walking.