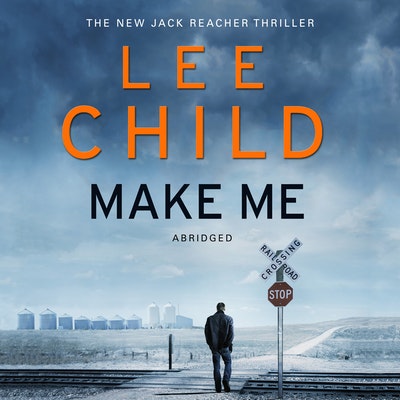 The new Lee Child is always one of the most explosive highlights of the publishing year, and this pacy, nailbiting new Jack Reacher thriller is sure to be one of his most addictive yet.

Jack Reacher has no place to go, and all the time in the world to get there, so a remote railroad stop on the prairie with the curious name of Mother's Rest seems perfect for an aimless one-day stopover.

He expects to find a lonely pioneer tombstone in a sea of nearly-ripe wheat ... but instead there is a woman waiting for a missing colleague, a cryptic note about two hundred deaths, and a small town full of silent, watchful people.

Reacher’s one-day stopover becomes an open-ended quest...into the heart of darkness. Prepare to be nailed to your seat by another hair-raising, heart-pounding adventure from the kick ass master of the thriller genre!

Praise for Make Me

Child's best for some time: an enhancement of the old formula, with detective-story and romcom elements (even sly humour) on top of the psychological duels and set-piece violence.

Lee Child's Reacher series has hit Book No. 20 with a resounding peal of wisecracking glee ("Are you going to be a problem?" "I'm already a problem. The question is, what are you going to do about it?"). Everything about it...is as strong as ever....Make Me is a hot one.

Breathless and bloody...You can't help lapping it up.

The fights are convincing and the dialogue is as brilliant as always.

I am very much in love with Jack Reacher - as a man and a role model. If I can't shag him, I want to be him.

The Reacher books are Westerns: they are about the man of honor coming to the lawless frontier town in order to impose a rough sort of justice...[Reacher]’s leading us back into the wilderness, with the reassurance that our psychopaths are bigger and stronger than the bad guys’ psychopaths. I’ve read all twenty of Lee Child’s novels. Maybe there’s something wrong with me. But I can’t wait for the twenty-first.

Does a fine job of ratcheting up the tension...The relentlessly entertaining Reacher format shows no sign of wearing out its welcome just yet.

As well as romance, there's as usual plenty of fast-paced, punchy action and deceptively deft plotting.

I was unable to put thebook down...a brilliantly crafted mystery and one of Child's best.

Turns into a sinister tri-state conspiracy with a massive body count...a Reacher novel par excellence, fuelled by the terse diague and breakneck action sequences that make Lee Child so popular.

No one writes more compelling thrillers than Child, who is at the top of his form with Make Me.

A crack detective who’s tougher than the toughest guys in the army…at bottom he’s a knight errant or a one-man A Team...he also has a streak of learning...Make Me is a return to form.