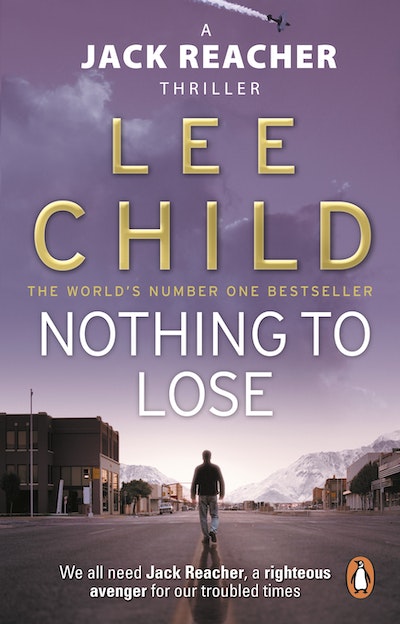 The double number one bestseller..

Two small towns in Colorado: Hope and Despair. Between them, nothing but twelve miles of empty road. Jack Reacher can't find a ride, so he walks. All he wants is a cup of coffee. What he gets are four redneck deputies who want to run him out of town.
Mistake. They're picking on the wrong guy. Jack Reacher is a big man, and he's in shape. No job, no address, no baggage. Nothing, except bloody-minded curiosity. What is the secret the locals seem so keen to hide?
A hard man is good to find. Ex-military cop Reacher is today's most addictive hero. Now he pulls on a tiny loose thread, to unravel conspiracies that expose the most shocking truths. Because, after all, Jack Reacher has nothing to lose.

Praise for Nothing To Lose

A cert to be a number one bestseller... A version of western, of course: the drifter who comes to town, sorts out the bad guys, and moves on... He makes what he does seem simple. If it is, though, it's strange that nobody else has managed it so well

Follows in the great Philip Marlowe pulp tradition, nuanced with a dash of Rambo and Bruce Willis... Reacher is a moody, modern outsider figure, one of the great antiheroes... a liberal intellectual with machismo, and arms the size of Popeye's

Classic Child... brilliantly paced... his tough-but-fair creation, Jack Reacher, both a man's man and a ladies' man, proves once again that he's also his own man. And no one is going to get in his way

Slots a series of bone-crunching brawls into a surprisingly sinuous and zeitgeisty plot... delivers emotional depth, and Reacher's bare-knuckle sleuthing certainly keeps the adrenalin up

A high-testosterone adventure with a thoughtful nod to what is going on in Iraq... a page turner. Thrilling

An unusually political novel, this is as gripping and readable as any in the Reacher series

This haunting, stand-alone novel is a subtler work than Child's previous output and offers a sensitively handled romantic sub-plot to boot

It's a testament to Lee Child's superb story-telling skills that... the interest doesn't flag for an instant... Like Reacher, Child doesn't do things by halves

One of the genre's most enduring heroes. Tough, solitary, righteous and incorruptible, [Reacher] harks back to another great fictional detective, Philip Marlowe

A new Jack Reacher novel arrives as the year's first red-hot beach book... the success of these books rests partly on the big, hulking shoulders of their charismatic hero... one of the most enduring action heroes on the American landscape

Reacher fans will love it - it's all storming compounds, breaking hearts and not bothering to take names, taking justice into his own hands and to hell with the wos'name... a solid inter-Bond-film substitute