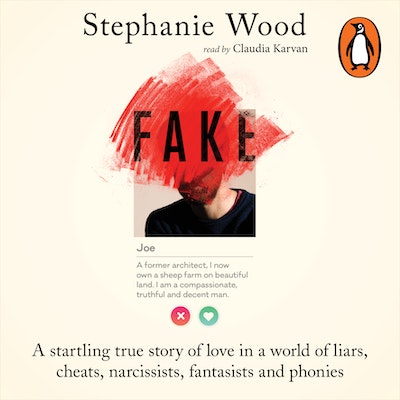 A startling true story of love in a world of liars, cheats, narcissists, fantasists and phonies

Narrated by award-winning actor, Claudia Karvan, Fake is a powerful, richly layered investigative story for our times, drawing on the personal stories of the author and other women who have been drawn into relationships based on duplicity and false hope.

Women the world over are brought up to hope, even expect, to find the man of their dreams, marry and live happily ever after. When Stephanie Wood meets a sweet, sophisticated man who owns land and businesses, she embarks on an exhilarating romance with him. He seems compassionate, truthful and loving. He talks about the future with her. She falls in love. She also becomes increasingly beset by anxiety at the lavish three-act plays he offers her in the form of excuses for frequent cancellations and no-shows. She begins to wonder, who is this man?

When she ends the relationship Stephanie switches back on her journalistic nous and uncovers a story of mind-boggling duplicity and manipulation. She also finds she is not alone; that the world is full of smart, sassy women who have suffered the attentions of liars, cheats, narcissists, fantasists and phonies, men with dangerously adept abilities to deceive.

In this brilliantly acute and broad-ranging book, Wood, an award-winning writer and journalist, has written a riveting, important account of contemporary love, and the resilience of those who have witnessed its darkest sides.

Stephanie Wood is an award-winning long-form features writer, known for her rare ability to tell substantial, compelling stories across a range of subjects. She is a former senior staff writer at Fairfax Media’s Good Weekend magazine (released with The Sydney Morning Herald and The Age newspapers each Saturday).

Her Good Weekend story recounting the events on the night of Melbourne’s thunderstorm asthma incident received the Jim Oram Award for Outstanding Feature Writing in the NRMA Kennedy Awards, while her article on the prescription opioid epidemic won the Australian and New Zealand College of Anaesthetists Media Award.

She has investigated corrupt Australians working in the NGO sector in Cambodia, and explored the radical changes hitting the inner-city Sydney suburb of Redfern. Her interest in telling stories about people who struggle on the edges of society has been reflected in articles about the life of a Kings Cross heroin addict; the travails of a troubled, mentally ill young man who was a victim of the NSW foster-care system; and the alarming increase in elderly abuse.

Stephanie is an accomplished profile writer and has told the stories of some of Australia’s most interesting characters: for stories, she has visited Richard Di Natale’s Victorian farm; struggled to understand Australian-born genius mathematician Terry Tao in his Los Angeles lounge-room; shared a couch with Molly Meldrum; trailed former Premier Mike Baird; and lunched with radio celebrity Kyle Sandilands.

She is a former editor of The Age Good Food Guide and an experienced food writer and restaurant reviewer, loves writing about the history of Australian cities and society, and her powerful personal essays on subjects including loneliness, childlessness and her brush with a romantic conman have drawn huge audiences and touched the lives of many readers.

Wood brings lyrical talent and solid insight into what drives some women (and some men) into the arms of ‘‘liars, cheats, narcissists, fantasists and phonies’’ and keeps them there. The story and the style are gripping and, thankfully, the resolution is deeply satisfying.

Fake takes a fascinating look at how desire, dependency and loneliness have manifested themselves in just some of the many people who have been fools for love.

In the riveting Fake, Wood unsnarls her ex-boyfriend’s dark knot of lies, and examines how she was primed to become a “handmaiden” to his dangerously hollow ego. Months after it’s all over, Joe’s grandiose lie remains lodged in Wood’s psyche like an undetonated ordnance. The page-crackling tension of Fake comes from watching her defuse it, one fragile untruth at a time; her journalistic nous colliding with her romantic gullibility. What emerges is a book that’s part psychological thriller, part public service alert. What elevates Fake from Dirty John-style voyeurism to socio-cultural sucker-punch is Wood’s candid investigation of how and why she proved so vulnerable to her lover’s rickety fantasies. Was it the “foolish mythology” she absorbed by “romantic osmosis”? Her bone-deep longing for connection, or shaky self-worth? The reckless neural chemistry of new love? Perhaps, it was just “the whole relentless, overwhelming narrative about what a woman’s life should look like”. At its red-raw heart, Fake is a recovery narrative: a story of sinking and surfacing.

Because at the heart of this book is love. It is not just a story about being duped for the love of a man, but a story about finding love for oneself. One senses the sheer force of the personal reckoning Wood must have had in order to write it. The self-flagellation, the tremendous shame – these are feelings of the past. She has built herself a suit of armour with which to face adversity, yes, but more importantly, has found the brilliant core within herself, and the final passages of the book blaze with it.

Fake is a breathtakingly honest and beautifully written account of the emotional wreckage caused by fraudsters of the heart. I found myself cheering for Stephanie as she majestically wields her literary scalpel to dissect and expose a manipulative, narcissistic conman. This is an exquisitely written piece of work in which the author bravely bares her soul.

This book absolutely deserves a place along side Johan Hari's Chasing the Scream, Chloe Hooper's Arsonist, Jon Ronson's Psychopath Test and Sarah Krasnostien's Trauma Cleaner. It's one of THOSE books and I'll be pushing into every hot little hand I can when it arrives in my shop.

An absorbing and deeply personal story which I think will resonate with many readers. Wood was in a relationship with a man who was largely not the man he purported to be, but there was enough truth to his stories that, on the whole, he checked out. She doubted herself. She spiralled into anxiety and depression. And then she slowly, painfully, discovered the truth behind the façade. Here she shares her story, as well as the stories of other women and men who have been similarly duped, because this shit happens. And it happens more than we may think. I particularly enjoyed the sections where Wood interviewed experts – anthropologists, psychotherapists – seeking information about why some people behave in this way and how people become victim to it. I’m still mulling over the description of how one can be addicted to hope, and the implications this can have on someone’s decisions.

A meticulously researched blend of memoir and investigative journalism that reads like a gripping thriller. Her exploration of the complexities of emotional abuse is at once harrowing and revealing, especially when she draws on psychological theory to wade into the murky waters of narcissistic personality disorder. Wood’s prose is languid yet vivid and she establishes trust with the reader as she divulges her own moments of vulnerability and shame. Wood has woven together a deeply immersive, incredibly human narrative that reveals truths both personal and universal.

As soon as I heard about this book, I was intensely curious about it. It’s based on an article that went viral in 2017 about Stephanie Wood’s experience being catfished by a manipulative narcissist. The lies he told to keep her on the hook were bizarre and, in some cases, totally unnecessary. But they kept coming until she was able to figure out what the real story was. The man she thought was a multi-millionaire with a harbourside apartment was more than likely of no fixed address. This book extends the original story with some in-depth reporting about the lengths this man goes to keep women (and there were multiple women!) going for years. It’s also much bigger than that, as it explores the world of online romance, how romance makes us crazy, and how predators use online dating as a way to manipulate and control people. It’s a fascinating story, and well worth a read.

Read this through in two gulps - has the forward momentum of a thriller, but beautifully-written and so insightful.

This is a cautionary tale, but it’s also the story of a woman who came out stronger – and wiser – in the end. If you’re single, read it. And if you’re in a relationship, you’d better read it too (because as Stephanie Wood found out, being coupled up is not necessarily insurance against lying cheats).

Stephanie Wood’s Fake is a deeply disturbing and very candid account of her romantic relationship with Joe, a retired architect who now leads the ‘simple life’ alongside his loyal kelpie – or so she initially thinks. At a glance, Wood’s recount of her catfishing experience reads like a love story gone wrong, and follows a well-traversed path on the dangers of online dating. In actuality, it explores so much more. Wood has crafted a richly layered story speaking of culturally ingrained fears surrounding one’s search for true love, and how these deep-seated anxieties welcome narcissists, fantasists and cheats with open arms.

Stephanie Wood, the former features journalist at The Good Weekend has written an incredible debut book. It’s a rich, detailed and thrilling look at a relationship she had with a narcissist and professional love-rat. Wood handles the complexities of human relationships with a deft hand, and ultimately leaves us with something that stays with us long after that final page.