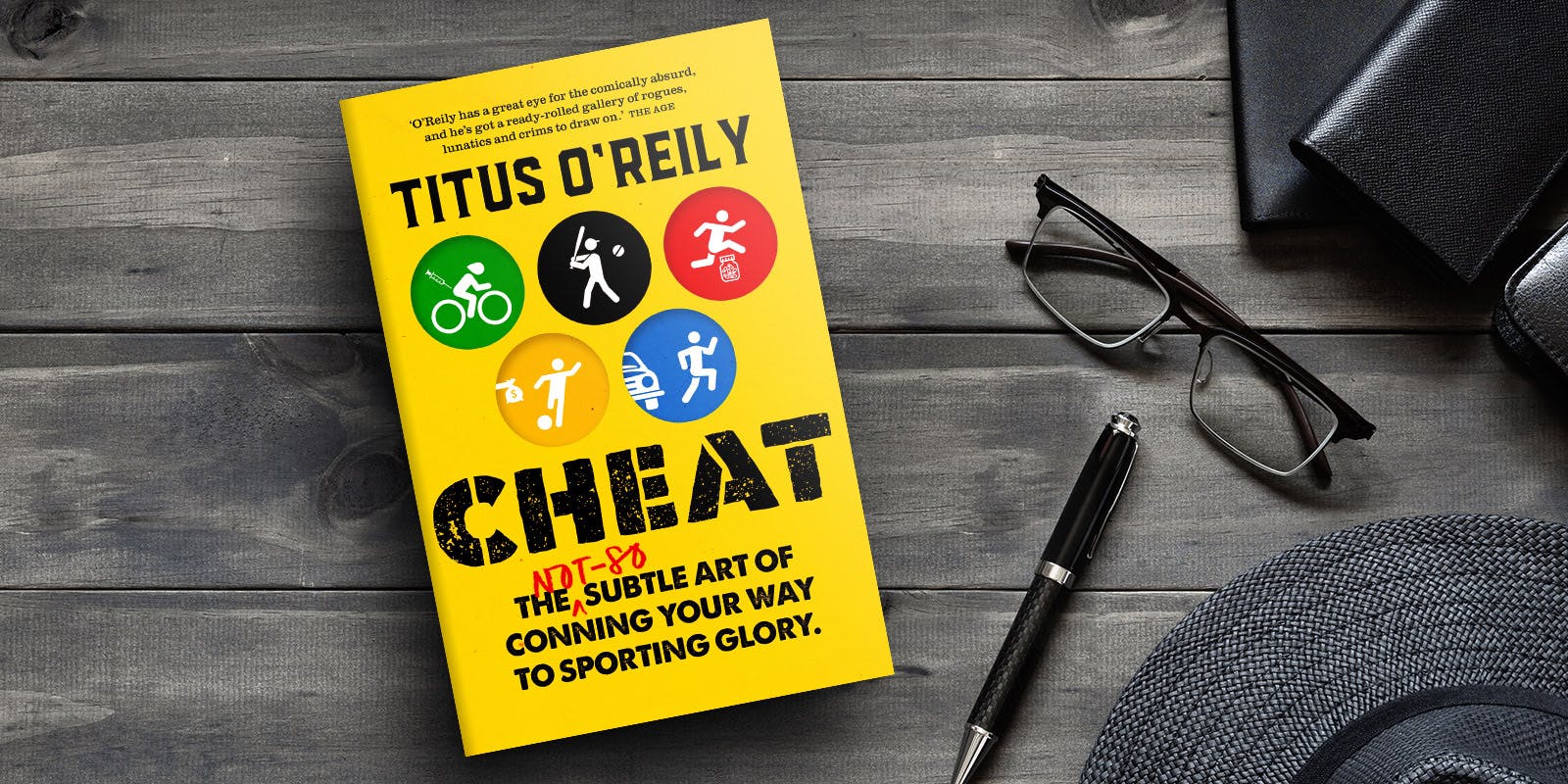 ‘For life to exist,’ writes Titus O’Reily in the introduction to his book Cheat: the Not-so Subtle Art of Conning Your Way to Sporting Glory, ‘it’s assumed you need water, an energy source like the sun, and carbon, hydrogen, oxygen and nitrogen. This doesn’t mean life will exist, but the requisite conditions are there.

‘The conditions for cheating to occur are far simpler. You only need two ingredients: something to compete over and humans. That’s it.’

From the fiendishly clever to the outright hare brained, the borderline to the blatant – in Cheat, Titus O’Reily takes us through the many and varied ways athletes and countries have tried to cheat at sport over the years. And through the stories of cheats across almost every sport conceivable, he reveals motivations as diverse as the means by which illegal advantages are sought.

For most, it’s greed. For many, it’s a refusal to lose. For some, it’s fame. For fewer still, it’s for the opportunity to impress their friends. ‘I worked with a guy once who every single painful Monday morning insisted on telling me about his Saturday morning ride,’ continues O’Reily. ‘He’d tell me in great detail how he’d beaten some personal best time and, much like I imagine Lance Armstrong did, I’d think, Man, I wish I was on some powerful drugs right now. As he droned on my dead eyes would have been a clue to my level of interest, but apparently that was too subtle for him.

‘But humans don’t even need powerful incentives to cheat. Being social creatures, we crave the approval of our peers; we want to be seen by others as being good at something. Because of that, cheating is human. It’s in our nature.’

With so many extraordinary tales of deception to choose from, it was difficult to select an anecdote from Cheat to share. So we followed our collective gut and chose the shortest one we could find. In the passage below, via the story of an unlikely champion, O’Reily offers some sage advice.

For someone who had just won the 1980 Boston Marathon, Rosie Ruiz looked remarkably fresh. Even though she was neither sweating nor breathing heavily, she had just run the course in 2:31:56, the third-fastest time ever recorded by a woman in a marathon.

Almost immediately, suspicions were raised. To begin with, none of the other runners could remember seeing her during the race.

The story became even more unlikely when it was revealed that Ruiz had taken up running only eighteen months earlier. Records showed she had competed in the New York Marathon, finishing twenty-third with a time of 2:56:33. While impressive, that made a time of 2:31:56 even more unlikely. People don’t shave off twenty-five minutes just like that.

As doubts swirled, Ruiz explained, ‘I got up with a lot of energy this morning.’ Now, this doesn’t sound like enough of an explanation, but I can’t be sure – I’ve never woken up with any energy, let alone lots of it.

People began to examine the photos and film from the race, and Ruiz wasn’t in any of them, except during the last 860 meters. Spectators also came forward to say that they had watched Ruiz jump out of the crowd less than a kilometre from the finish line.

Soon her New York performance came under scrutiny too, with witnesses saying they had sat with her during the race and had a chat while she was catching the subway in her running gear and race bib.

It took eight days, but finally the organisers in Boston stripped Ruiz of her title. However, she refused to admit any wrongdoing and kept her winners medal.

Ruiz passed away in 2019, having never admitted to anything. But a friend of hers said she had confessed to him she’d cheated on purpose, but had won by accident. ‘She jumped out of the crowd, not knowing that the first woman hadn’t gone by yet. Believe me, she was as shocked as anyone when she came in first.’

It turned out Ruiz had just wanted to do well in order to impress her colleagues, many of whom were keen runners. It’s a potent reminder that it’s never worth trying to impress your colleagues.

A hilarious trip through the history of cheating sport.