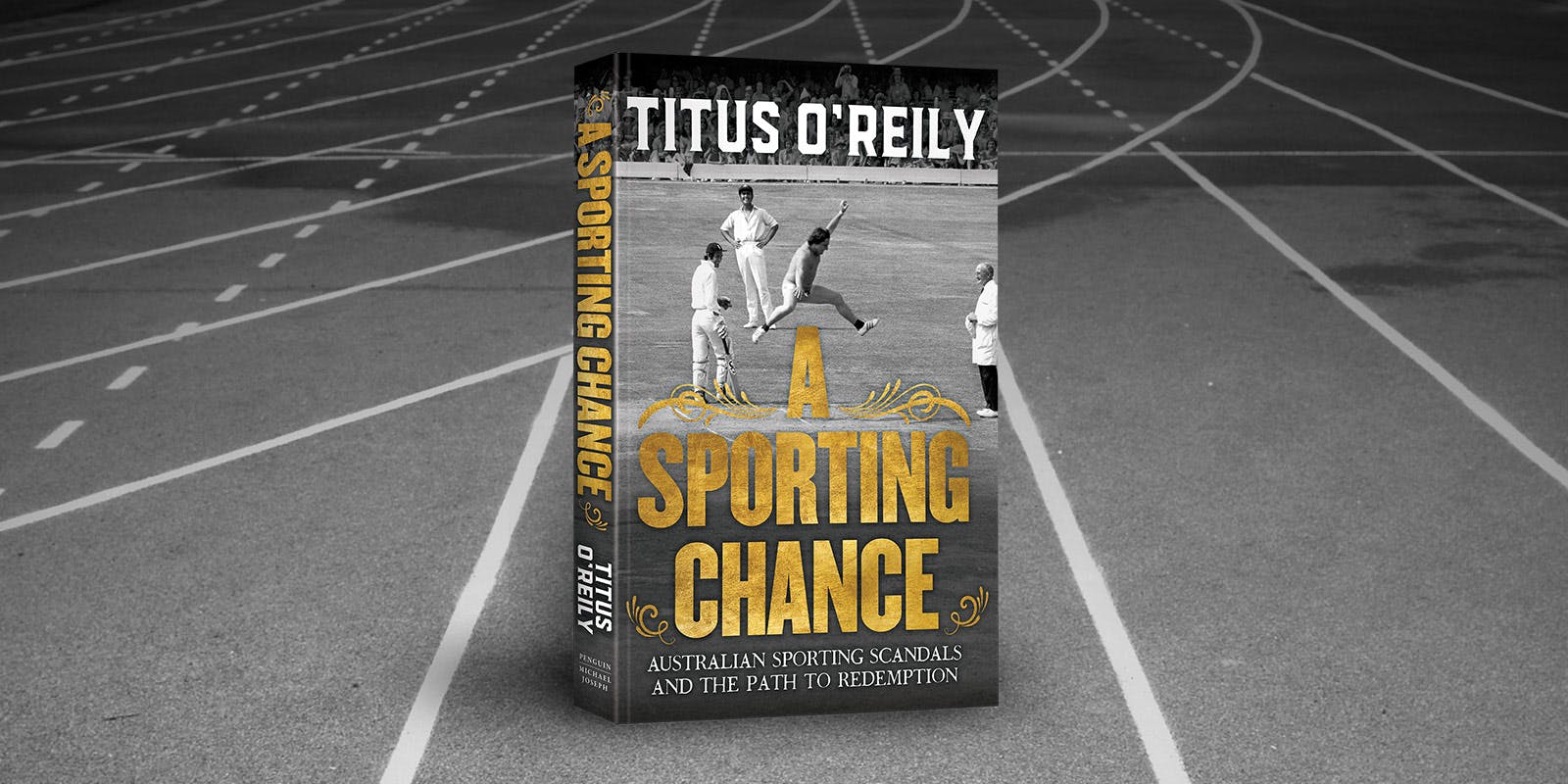 In A Sporting Chance, Titus O’Reily takes a microscope to Australia’s greatest sporting scandals, and the paths to redemption that invariably follow. In doing so, he asks: are Australians really that forgiving of their sporting heroes? With the rise of social media, women’s sport and the drive towards greater equality, are the Good Blokes of Australia’s sporting landscape an endangered species?

When a member of a close-knit group, like a professional sports team, does something awful or stupid, the us-against-them mentality that’s required on the field is too often extended beyond the boundary line. In the passage below, O’Reily introduces the concept of the Good Bloke, and outlines three defence strategies employed in the days following an athlete’s fall from grace.

It will come as no surprise to Australia’s 24 million sports fans that our sunburnt continent is home to one of the most dominant predators the world has ever seen. In our tropical rainforests, grasslands, eucalyptus forests and dry deserts, bounded by the Indian and Pacific oceans, this predator is king – free to roam without the restrictions that hold back many other species living in this ancient land. That creature, of course, is the Star Athlete.

Star Athletes have always flourished in this country, because they supply the people with the one thing they need to survive: sporting glory.

Some of these athletes enjoy stellar careers and go on to become model citizens. But others are caught in an all-too-familiar cycle of winning, crisis and forgiveness. These athletes are a mutation known as the Good Bloke, a dangerous subspecies of the Star Athlete, much like Indominus rex, the hybrid dinosaur in Jurassic World.

The Good Bloke has usually won a lot of silverware or has huge potential, and is also friends with lots of other sportsmen and media commentators. They are always forgiven for making fools of themselves, and suffer no consequences for indiscretions that would result in the rest of us being escorted from our workplace by someone with ‘People and Culture’ in their title.

Once upon a time the Good Bloke lived a free and easy life, but times are changing. This once impervious predator is now in danger. New, strange and terrifying threats have risen: smartphones, social media, integrity units, women in positions of power.

These changes raise questions that once seemed unthinkable. Is there no longer a place for the loveable larrikin in Australian sport? Does the rise of the nanny state mean photographing a model in the shower against her will and sending those photos to mates will begin to have serious consequences? Is the path to forgiveness as open as ever, or are our Star Athletes just one ball-tampering incident away from extinction?

STRATEGIES FOR DEFENDING THE GOOD BLOKES:

‘Sure, he’s done something here that’s reprehensible but he’s just a loveable larrikin when you get to know him,’ says [coach, teammate, close friend, sibling]. ‘What people don’t see is that when he’s not [belting people, abusing teammates, hanging out with gangland figures, sexually assaulting someone], he’s great fun to get drunk with.’

There is no better way to show how sorry you are for your actions than to read a prepared statement written by a committee of lawyers and spin doctors.

The entire purpose of the prepared statement is to prevent the person doing the apologising from saying what they actually believe or doing any thinking. More often than not it finishes with ‘I will not be making any further comments and I hope you respect my privacy at this difficult time.’

Imagine if in the middle of a fight with your partner, you read from a prepared statement and then announced you won’t be taking any further questions.

If you find yourself in a bit of trouble, a fun thing to do is claim anyone asking reasonable questions is on a ‘witch-hunt’. This is the equivalent of playing the man not the ball.

It’s a proud tradition and one Lance Armstrong used a lot before finally admitting to the doping that saw him stripped of seven Tour de France titles. Before he conceded everything people were saying about him was true, he said, ‘Over the past three years, I have been subjected to a two-year federal criminal investigation followed by Travis Tygart’s unconstitutional witch hunt.’

Cricket Australia Chairman David Peever did the same after the ball-tampering scandal, saying, ‘Circumstances like this are not the time for witch-hunts.’

Perhaps the master of the witch-hunt is News Limited columnist Andrew Bolt. He claimed the AFL’s finding of bringing the game into disrepute against the Essendon Football Club was ‘a kind of witch-hunt justice’. He also said of Israel Folau being criticised for homophobic comments: ‘Everything about this “scandal” smells of a witch-hunt by hypocrites.’

Ridiculous Australian tales of sporting stuff-ups and forgiveness by the bestselling author of A Thoroughly Unhelpful History of Australian Sport.