Fill your home with the aroma of festive spices this Christmas.

This is the most popular biscuit we bake. You know when they are almost done because the kitchen is filled with the most enticing aroma of warm spices and golden syrup. Children love the idea of baking them, attracted by the idea of making something they have read about in their bedtime books and also something they have creative control over, modelling the final shapes with their little hands. So much so that gingerbread-making parties have become quite an activity on cold winter’s afternoons.

Makes about 10 (The total number of gingerbread men will vary, depending on the size of the cutter.)

In a large bowl, cream the butter and sugar until pale and creamy, but not fluffy. Add the egg yolks and golden syrup and mix well.

Place the flour, baking powder, bicarbonate of soda, ground spices and salt in a large bowl and mix with a whisk. Add to the butter mixture and mix well until it forms a uniform dough. Roll into a ball, cover with plastic film and allow to rest in the fridge for at least 1 hour.

Place the gingerbread men on the prepared tray, leaving about 2 cm between each one.

Bake for about 15 minutes or until the gingerbread darkens and the smell of spices permeates the kitchen. Cool on the tray for a few minutes, then transfer to a wire rack to cool completely.

To make the icing, beat the egg white with a whisk until soft peaks form. Gradually sift in the icing sugar and then slowly add the lemon juice and blend until smooth.

Place the icing in a piping bag fitted with a thin nozzle and use to decorate the gingerbread men.

Gingerbread men will keep in an airtight container for several months.

TIP: If you are not going to decorate them with icing, brush the gingerbread men with a little egg white and sprinkle with extra sugar. 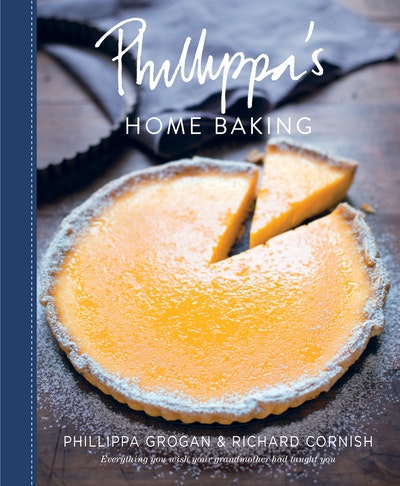 In this inspiring and generous book, written with Richard Cornish, Phillippa shares more than 140 reliable recipes from Australia, New Zealand and beyond, gathered from family, friends and her travels. What’s more, she hands on her precious baking wisdom, from baker to baker, to guarantee you’ll enjoy all the rewards of successful home baking for your loved ones.