Something to ponder with your book club: our lives aren't always what we make them out to be.

Described by Sophie Kinsella as 'a clever, uplifting book that entertains and makes you think’, The Authenticity Project is perfect for book clubs.

Desperate to confess the deep loneliness he feels, Julian begins The Authenticity Project – a small green notebook containing the truth about his life – to pass on and encourage others to share their own.

He never expects Monica to find it and track him down. Or that his small act of honesty will impact all those who come into contact with the book, and lead to a life-changing world of friendship and forgiveness…

So, what porkie pies have you told about your life? What do you think would happen if you told the truth instead? Ponder this, and the questions below, to open up a candid book club conversation. 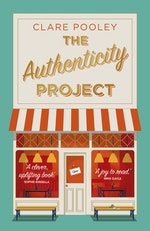 THE 2020 DEBUT NOVEL EVERYONE IS TALKING ABOUT. Our lives aren't always what we make them out to be. What would happen if we told the truth instead?