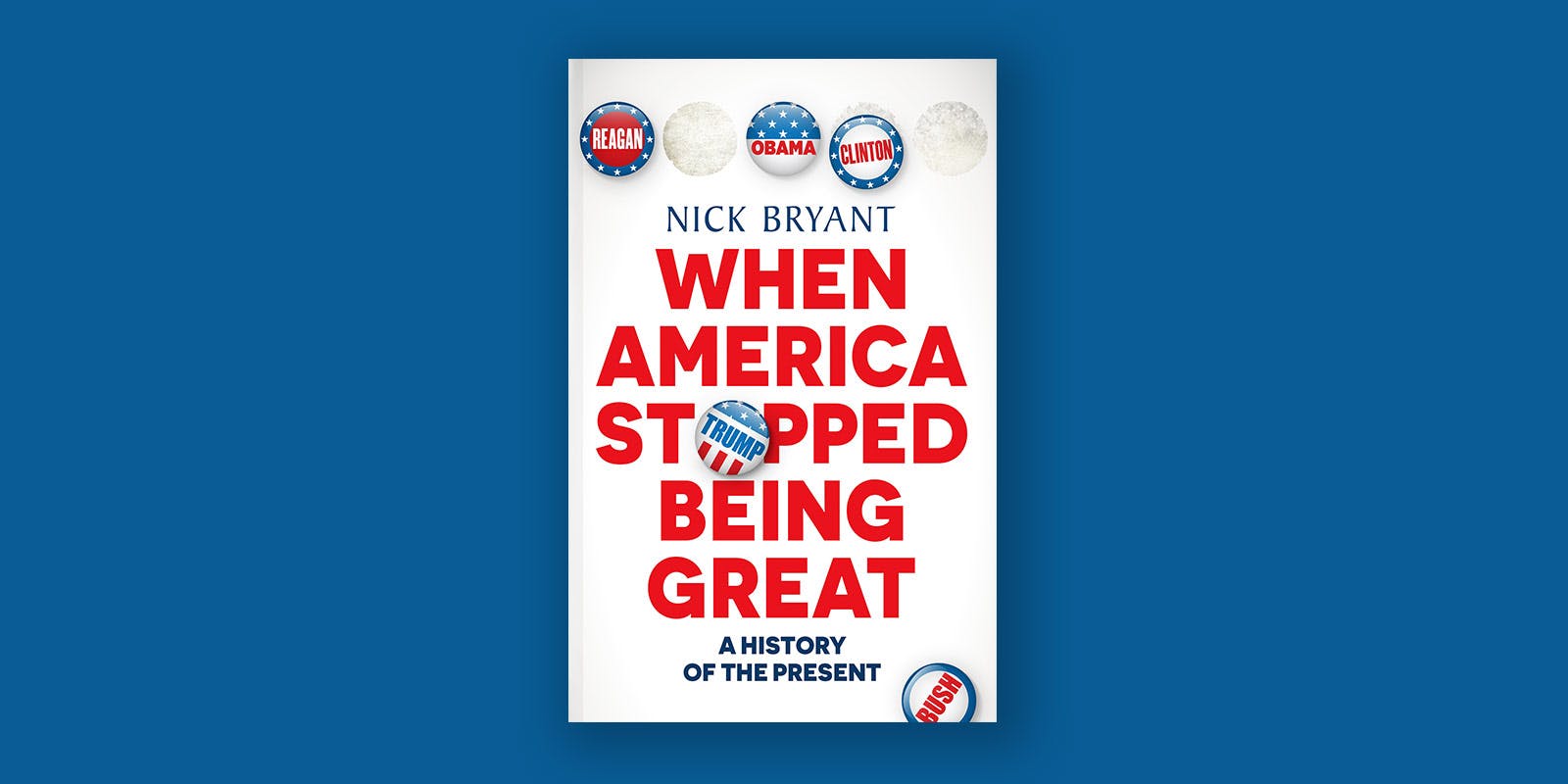 The presidency of Donald Trump is commonly seen as an historical accident. In When America Stopped Being Great, Nick Bryant argues that by 2016 it had become almost historically inescapable. Trump, Bryant argues, became a beneficiary of a broken politics, an iniquitous economy, an ailing media, a facile culture, disruptive new technology and the creation of a modern-day presidency that elevated showmanship over statesmanship. The story of the rise of the USA’s 45th president contains plenty of false starts, monumental stumbles and gaffes. In the passage below, Bryant outlines the unlikely start-point of one of Trump’s previous presidential forays: the professional wrestling ring.

In the late ’90s there was a warning that politics was not immune from the same hoopla as the O. J. Simpson trial. It came from an unlikely quarter, the normally sober-minded state of Minnesota, and in an improbable form, Jesse ‘The Body’ Ventura, a star of WrestleMania best known for his glittering skin-tight pants and luxuriant pink feather boas.

The free-wheeling Ventura, who had first raised the possi­bility of running for public office on his radio talk show, railed against political correctness and the political establishment – one of his opponents was the Democrat Hubert H. Humphrey III, the son of the former vice-president. Campaigning with the slogan ‘Retaliate in ’98’, his body-slam candidacy took on a populist momentum all of its own. A curio quickly became a phenomenon. His shock victory demonstrated how quickly the political order could be upended by an outsider with name recognition railing against ‘politics as usual’, who understood how to manipulate the modern media. Not insig­nificantly, Ventura’s grassroots campaign was one of the first to harness the power of the internet.

Having run in Minnesota as a Reform Party candidate, Ventura was talked of as the party’s prospective presidential nominee in 2000 – Hulk Hogan, his friend from the pro-wres­tling days, suggested they don leotards for one final bout before he took up residence in the White House. Ventura, however, had pledged to serve out his first term as governor, and therefore pushed another celebrity candidate as a kind of placeholder. The luminary he had in mind was his fellow grapple fan and friend from the WrestleMania circuit, Donald Trump.

The ’90s had been an unhappy interlude for the struggling New York tycoon. They began on the ski fields of Aspen, Colorado, when his first wife, Ivana, an Olympic skier, ran into her husband and his mistress, Marla Maples. This frac­tured love triangle produced the first tabloid scandal of the decade, when the break-up of his marriage coincided with the decline and fall of his casino empire.

At the beginning of 1990, Trump owed more than $4 billion to 70 banks. Even an illegal loan from his father, Fred, who bought $3.5 million worth of chips at the Trump Castle in Atlantic City and then walked out of the door without using them, could not save him from insolvency.

The sight in 1991 of a beggar proffering a tin cup outside Tiffany on Fifth Avenue brought home the abject state of his finances. ‘I looked at Marla and said, “You know, right now that man is worth $900 million more than I am.”’1 In another retelling of that moment, Trump claimed he said, ‘That bum isn’t worth a dime, but at least he’s at zero.’2

After restructuring his mammoth debts, his financial fortunes changed in the mid-’90s.3 By the summer of 1996, in an article headlined ‘An Ex-Loser Is Back in the Money’, Fortune celebrated his ‘Houdini-like escape’.4 In his 1997 bestseller The Art of the Comeback, Trump told the story of his financial recovery, and discussed his political prospects. ‘The problem is, I think I’m too honest, and perhaps too controversial, to be a politician,’ he wrote. ‘I always say it like it is, and I’m not sure a politician can do that.’ When Jesse Ventura talked up his candidacy, however, Trump started seriously exploring a run.

In a straw poll of delegates at the Reform Party conven­tion in 1999, Trump came a close second to the movement’s founder, Ross Perot. Revelling in his newfound political popularity, he appeared on Larry King Live in October and announced, Perot-like, the formation of a presidential exploratory committee headed by his friend Roger Stone. Afterwards, Trump embarked upon a media blitz that once more demonstrated his gift for self-publicity. Oprah Winfrey would be his ideal running mate, he teased. His then girl­friend, Melania Knauss, would become his wife, so she could serve as First Lady.

In another sign of things to come, Saturday Night Live lampooned him with a sketch based on an imaginary strategy meeting between Trump, Perot and Pat Buchanan, whose rival campaign for the Reform Party nomination had run into trouble because of his absurd claim that America need not have confronted Hitler.5 ‘The Reform Party needs a new crazy leader,’ said a Ross Perot impersonator, looking expectantly at Trump and Buchanan. ‘What we need is a real nutbag.’

The Wall Street Journal took Trump more seriously, and allotted prime real estate on its op-ed page for a characteris­tically self-aggrandising column, ‘America Needs a President Like Me’. ‘Let’s cut to the chase,’ it began breathlessly. ‘Yes, I am considering a run for president. The reason has nothing to do with vanity, as some have suggested.’

In what read like a preview of his Twitter feed, Trump promised to negotiate better trade deals (‘If President Trump does the negotiating, we’ll get a better deal for American workers and their families… Watch our trade deficits dwindle’) and threatened to bomb Pyongyang (‘North Korea would suddenly discover that its worthless promises of civilised behaviour would cut no ice’). Denounc­ing the ‘striped pants set’ running US foreign policy, he vowed to reverse any move to normalise relations with Fidel Castro’s Cuba.

In parts, he sounded clairvoyant: ‘I believe non-politicians represent the wave of the future.’ Now, though, he presented himself as a centrist. ‘The Republicans are captives of their right wing. The Democrats are captives of their left wing. I don’t hear anyone speaking for the working men and women in the center.’

Jesse Ventura was his model: ‘the embodiment of the political qualities America needs’. Promising to renego­tiate better trade deals, Trump pledged to run solely for a single term, so he could return to the job in New York he loved doing. ‘I would center my presidency around three principles,’ he concluded, ‘one term, two-fisted policies, and no excuses. For voters, it would be a business approach and the best one available in the presidential marketplace.’

In outlining his presidential manifesto, Trump sounded at times like a New York Democrat. On abortion, he was ‘totally for choice’. On healthcare, he was borderline socialistic. ‘We must have universal healthcare’ based on the Canada model, he wrote in his campaign book, The America We Deserve. ‘We need, as a nation, to re-examine the single-payer plan, as many individual states are doing.’

On other issues, such as gun control, he claimed to be ‘very conservative’. His Cabinet dream team included Oprah, the General Electric CEO Jack Welch, the Teamsters boss Jim Hoffa (the son of James), Jeb Bush and Steven Spielberg.6

An irony of his run, given his nativism 15 years later, was that Trump framed his battle with Buchanan as a choice between tolerance and intolerance. To draw more atten­tion to his opponent’s anti-Semitism, he toured the Simon Wiesenthal Center’s Museum of Tolerance in Los Angeles. ‘We must recognise bigotry and prejudice and defeat it wherever it appears,’ he said, high-mindedly.7

Only ‘the really staunch right wacko vote’ would back a racist like Pat Buchanan, he told Tim Russert on Meet the Press.8 As the political commentator Steve Kornacki cleverly put it, Trump was fighting Trumpism.

Only in his demonisation of the Central Park Five, a group of African-Americans wrongly convicted of the rape and assault of a white female jogger attacked in 1989, were there shades of the racism that lay in store. In response to the attack, he had placed ads in four New York newspapers calling for the state to adopt the death penalty. ‘Bring Back The Death Penalty And Bring Back Our Police,’ he wrote in all caps. In The America We Deserve, he boasted about demanding the death penalty for the five blacks. Nor did he make any effort to conceal his misogyny. ‘The only differ­ence between me and the other candidates,’ he said at one point, ‘is that I’m more honest and my women are more beautiful.’9

Early in election year, Trump decided to end his bid after Buchanan received the endorsement of the former KKK leader David Duke and a self-styled black nationalist Marxist called Lenora Fulani. No longer was he interested in being the figurehead of a party, as he put it, that now included a Klansman, a neo-Nazi, and a communist. Nor did he want to be associated with the crackpots he had encountered at a Reform Party event in California, where, he grumbled, ‘the room was crowded with Elvis lookalikes, resplendent in various campaign buttons and anxious to give me a platform explaining the Swiss-Zionist conspiracy to control America’.10

The Reform Party’s then head Pat Choate was not unhappy to see the back of him. ‘Donald Trump came in, promoted his hotel, promoted his book, he promoted himself at our expense,’ he complained. ‘All this was was a serious hustle on the media, and I think the media should send him a massive bill on it.’11 So ended Donald Trump’s first semi-serious bid for the presidency.

In 2000, the career trajectory of his future presidential rival was very much on the up. That November, Hillary Clinton won the New York Senate seat left vacant by Daniel Patrick Moynihan, a victory she celebrated in the presiden­tial suite of the Hyatt on 42nd Street, the hotel that had established Trump’s deal-making reputation. If the ’80s had been the making of the New York billionaire, the Clintons had dominated the ’90s. Reflecting on that roaring decade, Hillary Clinton had asked, ‘Which part of peace and pros­perity didn’t you like?’12 By 2016, voters had compiled a laundry list of complaints.