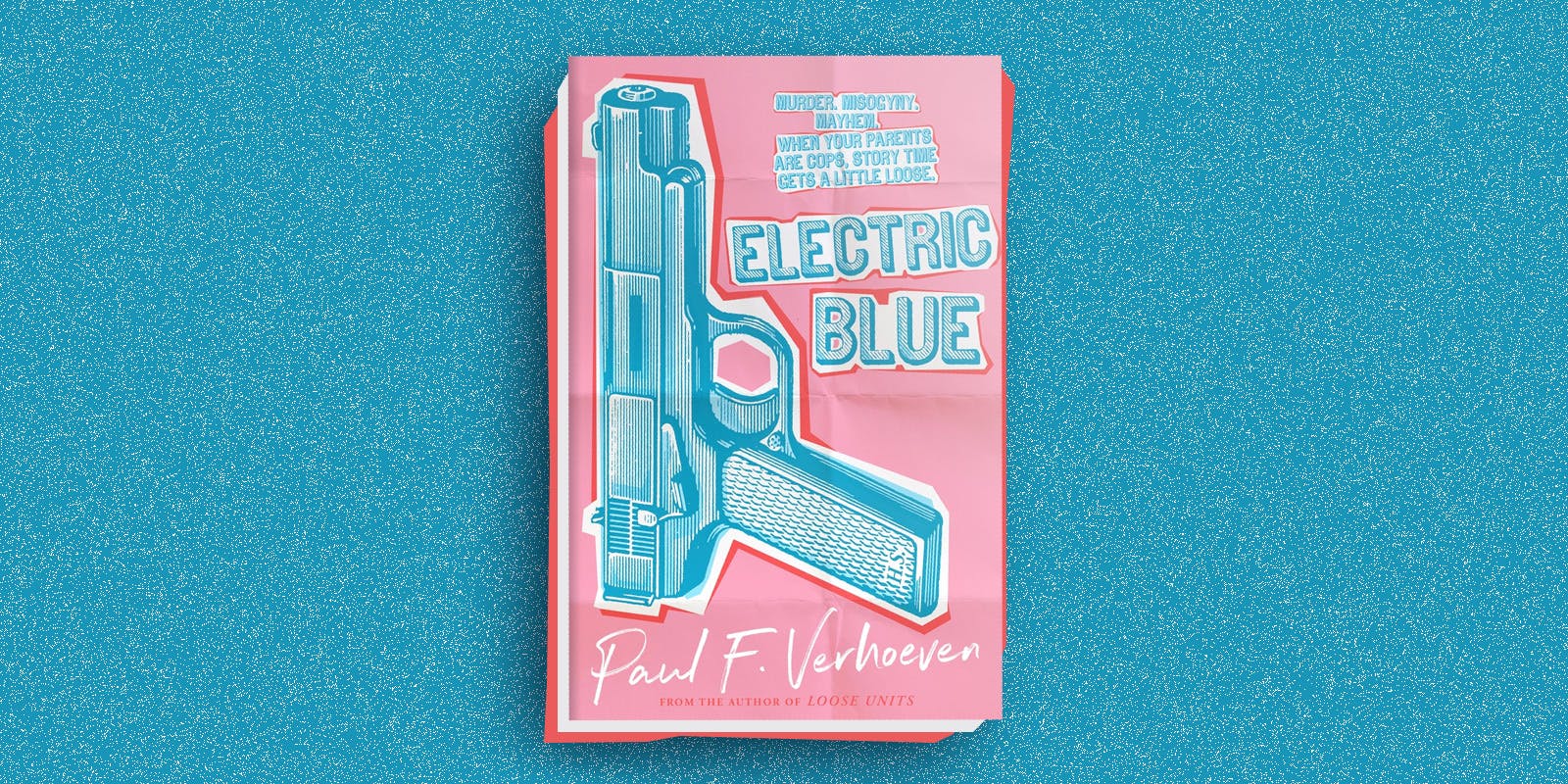 ‘My dad is a weird guy,’ writes Paul Verhoeven in Electric Blue – the darkly hilarious follow-up to Loose Units. In this book, he delves into his ‘hero cop’ father John’s final years in the New South Wales Police Force, working in the grimy, analytical world of Forensics.

Electric Blue is based on a series of conversations, via which Paul assembles a picture of policing as a seedy, at times scary and often strange vocation. As they race through Sydney’s underbelly, John recounts the crimes, the characters and the pitch-black humour. As well as unpicking his dad’s most terrible cases, Paul reveals his mother, Christine’s, experiences as a pioneering female police officer in the 1980s. And throughout, Paul explores the question of how hero cops ended up with a sensitive artsy coward for a son.

By way of introduction to this unique father–son relationship, early in the book Paul finds John bent over, combing the tassels on a lavish Persian rug – with a hairbrush. ‘He looks up at me,’ writes Paul, ‘with an expression that says, I know you want me to look ashamed about this. But I’m not ashamed about this. These tassels were out of alignment, Paul.’

‘“This had better not go in the fucking book, mate,” Dad says aloud.’

‘“Why would I put this in the book?” I reply calmly, making a mental note to put it not just in the book, but right near the start of the book so it sticks in everyone’s memory.’

In the passage from Electric Blue below, John learns a valuable lesson from his looming, sideburned, ex-hippy supervisor, Grey.

John was struggling a little. Not with his job – which was humming along beautifully – but struggling to process some of what he was seeing on the job in Forensics. You can’t unsee some things. You can’t, as Grey would say, ‘get the shit back into the horse’. But Grey also said that the best way to deal with these occupational horrors was the ‘stubbed toe method’.

‘What do you mean?’ John asked, sitting across from Grey at his desk, leaning back on his chair.

‘No, John. It’s a metaphor. Let’s say my sore knee is trauma from, for example, having headed over to the detectives’ office and seen a man you met years ago being force-fed a bucket of excrement. Trauma. Traumatised. This knee—’ he pointed at his knee again ‘—ouchie. So, what’s the quickest way to stop having to think about the pain, John?’

Grey clapped, beamed, and brought his leg back like a pendulum. ‘Observe!’ he bellowed gregariously, and swung his enormous foot down, his toes crashing into the leg of his enormous oak desk. Immediately, his face was a tapestry of agony, eyes twitching, mouth pulling up into a grimace. ‘Now,’ he squeaked through gritted teeth, ‘what am I not thinking about, John?’

John, shocked by the sudden display, cast about the room. ‘Are you okay? Jesus Christ! Why did you do that?’

‘Was there not an easier way to illustrate your point?’

‘Yes! Yes there was. But it wouldn’t have stuck with you, John. Fuck. Fuckety fuck fuck fuckington, this hurts.’ Grey sat down, tears beginning to stream down his face. ‘I think I broke something. John! The point is this: if you can’t stop thinking about a case, a horrible case… busy yourself immediately with a case of equal or greater horribleness.’

John stared, agog, at his wincing mentor. ‘Do you . . . do you have something for me? Of equal or greater horribleness?’

John looked at Grey and shook his head. He had silently prayed for a wise, weird and wizened mentor; this looming, brilliant ex-hippy was all of those things, and he sure as hell kept John on his toes… even if he did insist upon potentially breaking his own in the process.