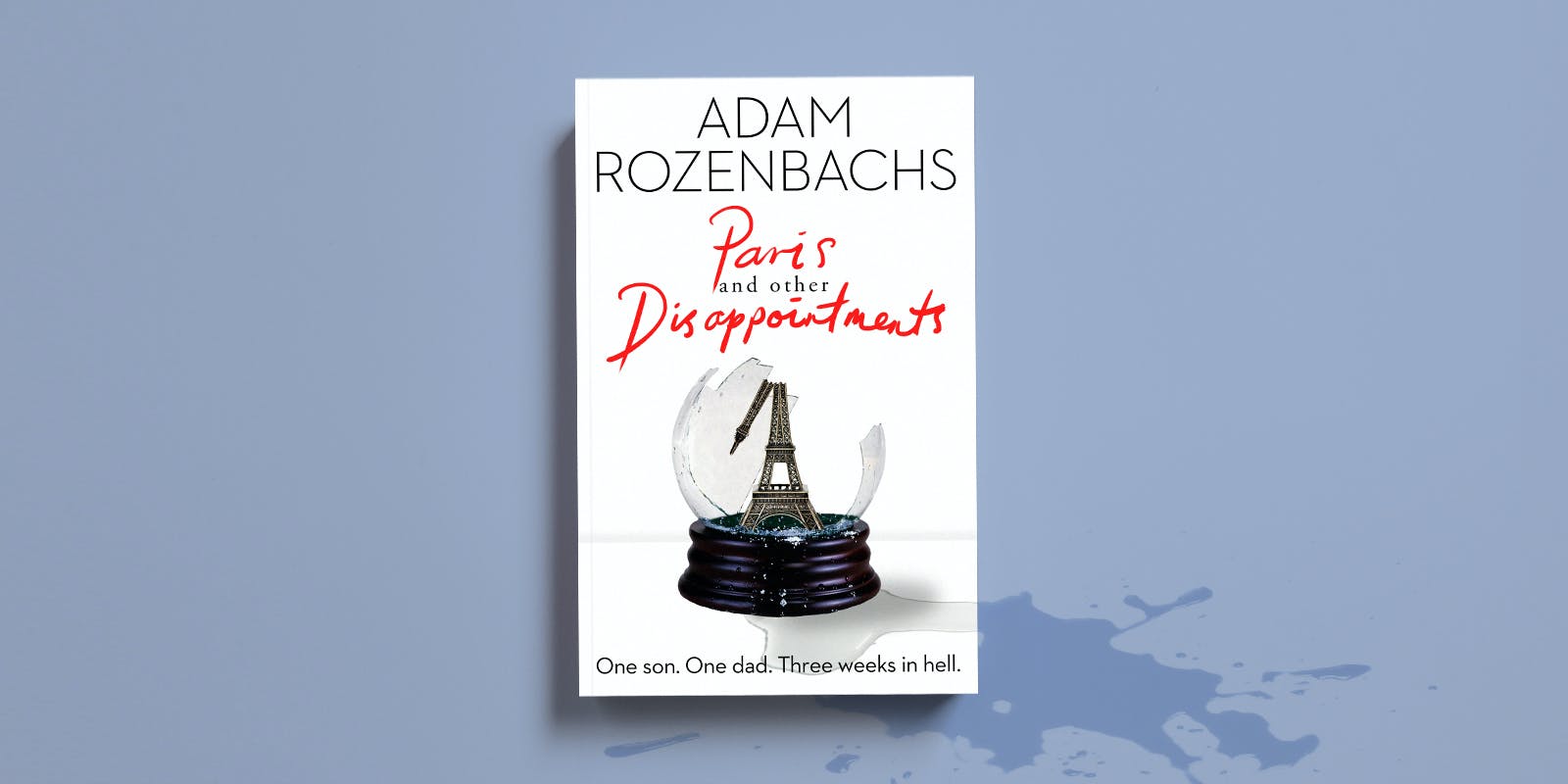 When comedian Adam Rozenbachs offered to accompany his travel-novice dad on a three-week trip to Europe, he hadn’t really thought it through. But given the fact there were witnesses to the offer, and they were both sober at the time, mutual stubbornness dictated there was little chance either party would back out of the idea. For Rozenbachs Jr, the alarm bells started at the airport – as his father produced an enormous bright-red suitcase he’d found in a bin. Paris and other Disappointments is his memoir of travelling with an adult toddler (an adoddler) and the joys and challenges of family in confined spaces. The book is peppered with anecdotes that give greater context to the situations with which this unlikely travel duo must navigate. In the passage below, Rozenbachs Jr recounts one of the closest things to actual travel he experienced as a child: a run to the tip. Happy Father’s Day to all the dads, regardless of trailer-reversing prowess.

When I was younger I loved spending time with Dad. My favour­ite outing together was our biannual trip to the tip. The moment Dad mentioned we ‘might head to the tip next Sunday’ I started to get excited. He probably didn’t enjoy going as much as I did, because for him it meant gathering enough crap to put in the trailer to make it worthwhile. It might be pruning all the shrub­bery around the house, or perhaps Mum was sick of the garage having more and more things packed into it and had demanded a clean out. But I couldn’t wait.

I’d help Dad bring things to the trailer, but wasn’t allowed to pack it. At that young age I didn’t have the Tetris skills required to make the most of the limited space the trailer offered. So I stood back and watched, tossing on a branch or two that slipped off.

Once the trailer was brimming with crap piled so high it blocked all visibility from the car, it was time to stand back as Dad tied down the load. Years later, at my first ever adult job, packing boxes in a warehouse, I was taught by truckies during pick-ups how to tie proper knots for securing cargo. Dad used none of these. He would loop the rope around and over the trailer and rubbish about a thousand times, tying knots so tight they added an extra fifteen minutes when we got to the tip because no one could undo them. And we weren’t allowed to cut the ropes because, as he’d tell me, ‘Ropes don’t grow on trees.’

But once the knots were undone, it was party time. I could throw rubbish as far as eight-year-old-humanly possible. Even though I wasn’t allowed to help with the packing of the trailer, I made sure to pay close attention to where certain items were being placed. In particular, the breakables. The moment these treasures were exposed, I swooped in. Nowhere else in the world was I afforded the freedom to break things with, as I saw it, ‘diplomatic immunity’. Glassware was the most fun to throw. Or seeing someone else’s glassware on the tip pile, aiming whatever I could at it, and smashing it into a million pieces. All without getting in trouble! For a child it was like international waters, and I was a pirate on the high seas of garbage.

The tip wasn’t all fun and games though. Well, not for the adults. When it came to reversing the trailer up to the pile of rubbish, there was immense pressure to complete it in one go. The Tip Guys who worked amongst the sweet, rotting stench all day would point to a gap leading to the pile and you’d back your car and trailer into that spot. Theirs was a smooth process, knowing exactly where to direct people so the tractor could come along and push your rubbish from one pile into a bigger pile. As a kid, it was majestic. I envied the Tip Guys. Until a time I saw one sitting on an old esky eating his sandwich surrounded by hundreds of seagulls, like a pungent remake of Hitchcock’s The Birds. As much as I loved the tip, even I had to draw the line there.

Reversing a trailer is one of those skills you don’t appreci­ate until you try to do it. Unless you own a boat or a horse, some people may never attempt it, making it something of a lost art. But if you have tried it, you’ll understand how difficult it is. The idea of having to turn the steering wheel in the opposite direc­tion of where you want the trailer to go is confusing enough. In practice it’s even worse, as the front end of the car goes in one direction, the trailer flies off in another, and you have to spin the wheel like you’re in control of a tall ship.

Once, as I was enjoying the sophisticated, guilt-free pleasure of throwing breakables onto other breakables, I watched someone try to back a trailer into the space next to us. Except the trailer reversing towards me was coming at an acute angle. I stood back and watched as the car drove a good distance forward to reset the whole procedure, only to reverse so poorly the trailer nearly took out our car beside it. This was followed by one more poor attempt, which Dad halted by whistling for the driver to stop, lest there be a jackknifing and the trailer end up at a right angle to their car.

As a kid I had no appreciation of the art of the trailer reverse. Dad just backed the car in anywhere. Tips, driveways, down the street, wherever. He could do it, so I assumed everyone else could, too.

Turns out this guy couldn’t. Even at that young age I could sense the pressure he was under. One misfire, that was okay. On his second go people started to notice. By the third attempt everyone had put down their rubbish to watch the spectacle of the man who couldn’t reverse a trailer. This is what nightmares are made of.

But with a quick, ‘Jump out, mate,’ Dad took control of the situation. The guy sheepishly got out of his car, Dad jumped in and handled the wheel with casual aplomb as he backed the man’s car in for him, perfect on the first attempt.

I was impressed, and proud that Dad had these skills this other man didn’t. It was the early eighties; if he couldn’t reverse a trailer I have no doubt his manliness was brought into question. Probably after he unloaded all the rubbish from his trailer he threw his testicles away as well.

As the years went on, Dad would let me tie down a section of the trailer, always double-checking my work so things didn’t fly off on the drive down to the tip. Eventually we reached the point where I was allowed to hitch the trailer to the car. I’d completed this successfully a few times, until one day, in my haste, I forgot to push down the handle that activates the locking mechanism and secures the trailer to the tow ball.

I’d remembered to attach the chains to the tow bar (a back-up safety measure), so when the trailer slipped off it was still attached to the car. This meant the chains went taut as we pulled away, but slackened as Dad slowed. ‘What’s that noise?’ quickly became ‘JESUS, ADAM!’ as a fully laden trailer slammed into the back of the car.

The car was fine, but Dad’s trust in me was not. Trust further eroded when only weeks later, probably distracted thinking about the trailer, I got the pause/record button wrong on a TV show we were taping on the VCR, so that I recorded the ads and edited out the program. By the time I had regained Dad’s trust, the tip had been converted into a recycling station and there was no more need for the trailer.

The tip remained a fond memory, but that love of spending time with Dad was about to be seriously tested. Dad’s compe­tency in some areas, like reversing a trailer or removing Teflon, made him think everything else would come to him just as easily. Combined with his never really trusting my judgement, it meant he never listened to my advice on anything, no matter how out of his depth he was.

Paris and Other Disappointments Adam Rozenbachs

A memoir about family, travel and why the Eiffel Tower is a real letdown in person, based on the sold-out Comedy Festival show.