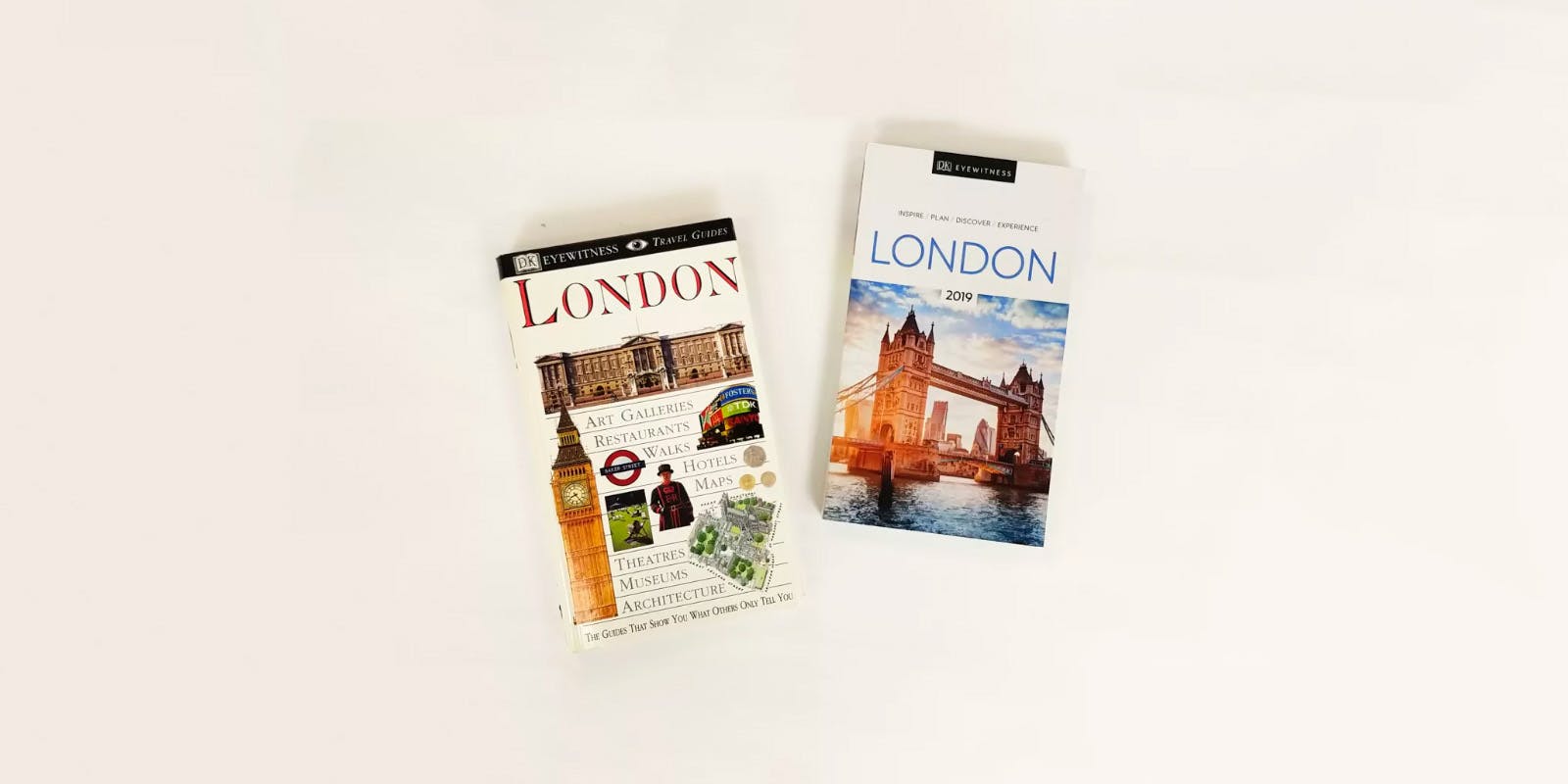 9 ways travel has changed over the past 25 years

Take a step back in time...

Disposable cameras, postcards and a bulging carry-on bag: all were key elements of travel back in 1993, a year that also saw the release of our first ever DK Eyewitness Travel Guide.

To mark our 25th anniversary, and to coincide with the relaunch of our DK Eyewitness series, let’s step back in time and look at how drastically holidays have changed since 1993.

While today, low-cost airlines allow us to take last-minute holidays on the cheap, back in 1993 these affordable flights didn’t exist; Jetstar and Tiger Air only launched in 2003 and 2007, respectively. Flights remain far cheaper on average than they were 25 years ago thanks in large part to $1 return deals and all sorts of other offers thought up by the clever people at budget airlines’ headquarters.

They’re also much more abundant, something which partly accounts for an almost 300% increase in the number of overseas trips taken by travellers since the early 1990s. The profusion of flights on offer has also changed the way we travel. Rather than the fortnight-long “Big Trips” of the 1990s’, short breaks and one-week jaunts now reign supreme. 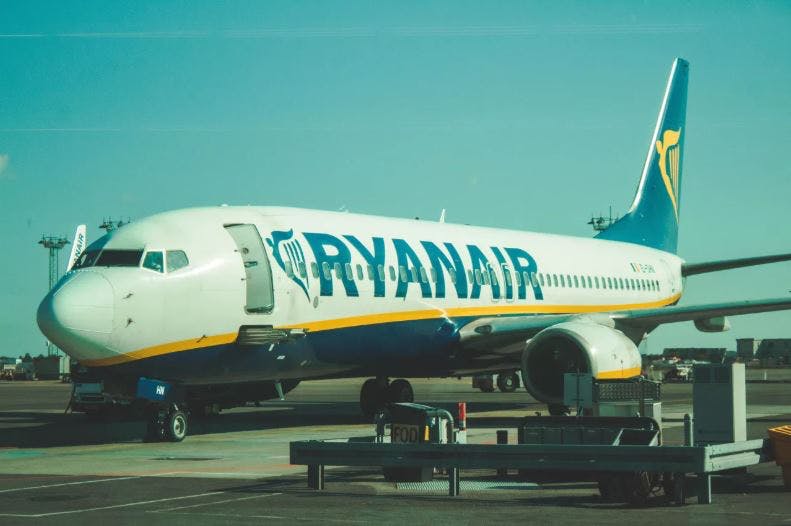 2. Travel was simpler, but less independent

Still at a nascent stage, the internet was unknown to most earthlings back in 1993. So, amid such Neanderthal days of information-underload, holidaymakers visited shop-based travel agents for help with trip-planning, or snapped up package deals via services like Teletext.

Today, the mind-boggling array of data at our disposal enables wholly-independent travel experiences, from finding the cheapest flights on Skyscanner to researching Lisbon’s best restaurants on TripAdvisor. But such a wealth of information can be overwhelming – that’s where travel guides come in handy, cutting through the cacophony of online information and providing expertly-curated, local advice. 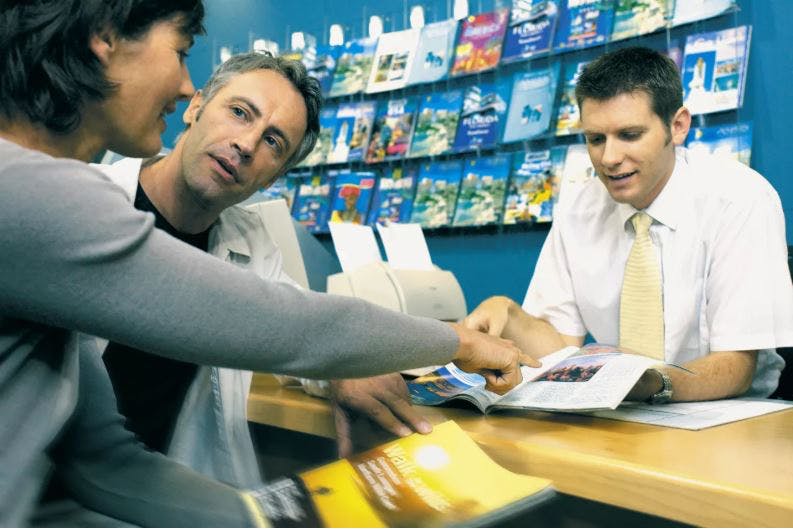 3. It was all about the tick-list

Immersive travel – cooking classes, local-led tours, street-art safaris – is very much a contemporary craze. Rewind to the 1990s and the focus was largely on seeing specific sights, rather than a desire to really get under the skin of a destination.

And while tourists today remain keen on admiring those bucket-list sights, like the Eiffel Tower in Paris or Rome’s Trevi Fountain, so equally do we hanker to unearth a more authentic side to a city or country. That’s why, in our brand-new DK Eyewitness Travel Guides, we not only include must-see sights, but blend this with local, insider advice on the best experiences a destination has to offer. 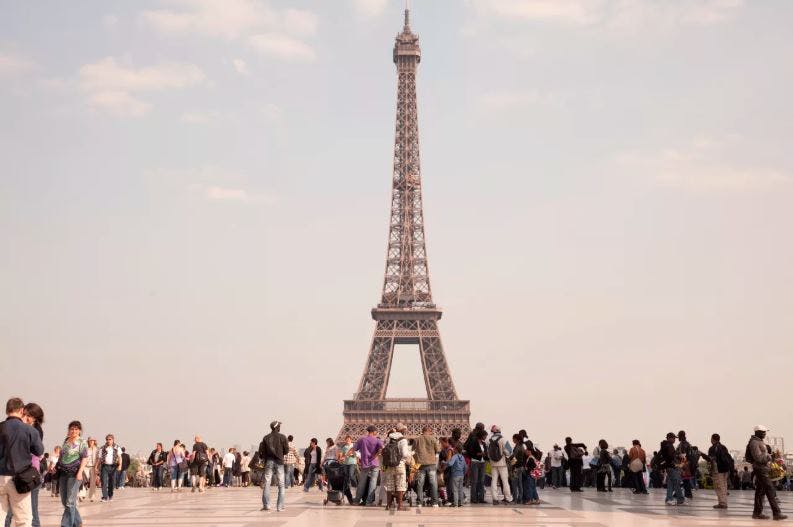 One of 1993’s hottest destinations? Cambodia. Post-Khmer Rouge, the country and its magnificent Angkorian temples were opening up to visitors. Since then, tourist numbers have soared by over 30,000%. Other destinations, especially those in Asia, Africa, the Middle East and South America, have seen similar – if not as rapid – market growth during the past quarter-century.

A number of European destinations have also seen an influx of travellers. In 1993, Eastern European countries were only just opening their doors. Fast-forward to 2018 and Prague, Budapest and Warsaw are now some of the continent’s hottest destinations, while Croatia is firmly on many travellers' bucket lists. Most of these new destinations would have seemed decidedly offbeat back in 1993 –  a time when European classics like France, Spain and Italy held near-total sway. 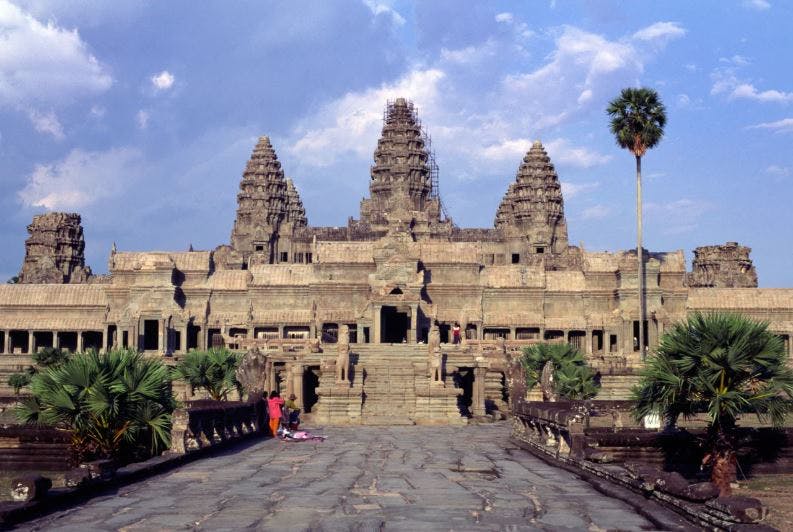 5. We kept in touch with postcards

Whether in Cambodia or Cannes, 1993’s vacationers typically mailed postcards to friends or families. That, or they made long-distance calls with shaky connections from complicated phone boxes.

Keeping in touch is a cinch for us 21st-century travellers, though; communication is near-instantaneous via applications like Skype and WhatsApp, everyone has a smartphone, and WiFi’s always on offer. Postcards are still sent – and still take yonks to arrive; some things really do never change – but have since assumed a retro charm. 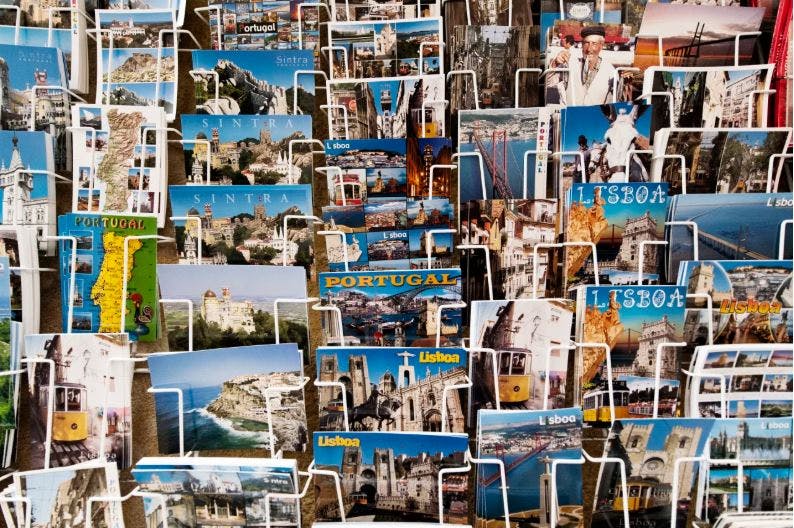 If you told a friend in 1993 that your trip-base was a local’s pad, they’d have figured you meant a holiday let. Such properties, along with hotels and B&Bs, were pretty much the extent of mainstream travel accommodation back then.

But Airbnb and its numerous imitators have subsequently changed everything. Now, not only can you stay in bonafide local homes, but also in bonafide local windmills, wagons, boats, lighthouses and even lorries. 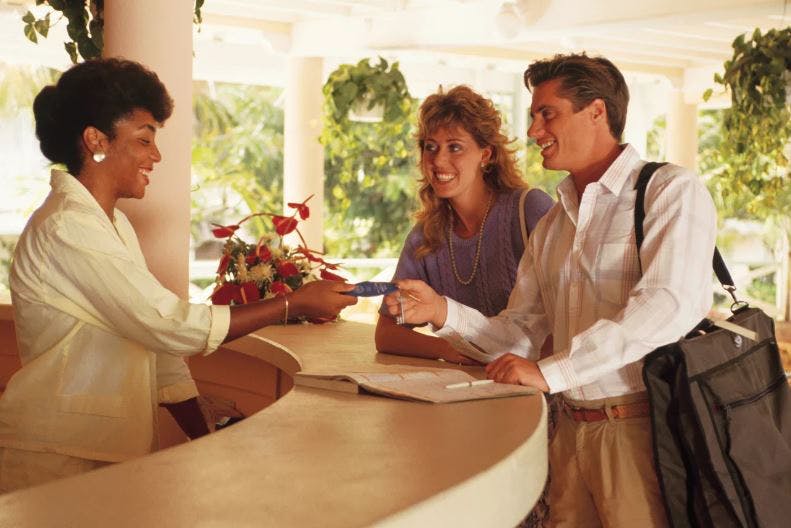 A couple checking into a resort hotel © Getty Images/Comstock

Remember relatives taking you through their holiday shots? Remember rationing and carefully taking your disposable camera’s 20-odd unalterable snaps? Such was travel photography in 1993, a pursuit punctuated by tedious trips to Boots to get negatives developed.

Yet soon came along dinky digital cameras, the internet and finally smartphones, devices whose excellent lenses and high-storage potential today allow for photos galore – and for immediately sharing these images via Instagram, Twitter and Facebook. 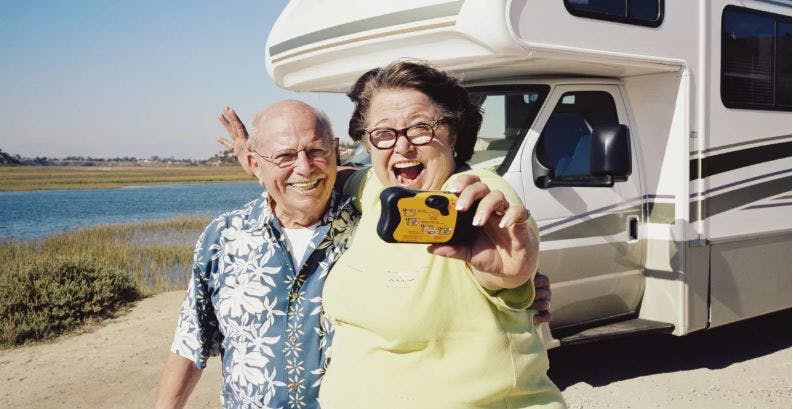 8. Your carry-on bag was bursting at the seams

In 1993, travellers had to cram plane tickets, boarding passes, travellers cheques and bags of local currencies into their carry-on, as well as lugging around any novels you might want to read on the flight over.

Life is simpler – and lighter – now. For one thing, we’re no longer weighed down by local currency: a proliferation of global ATMs and free-to-use-abroad bank cards mean we can grab cash on the go. Plus, phones now host all our e-tickets and boarding passes.

Here at DK Travel, we’ve taken note of this lighter approach to travel. That’s why our updated DK Eyewitness Travel Guides now come in a smaller, lightweight format that will fit easily into your backpack. 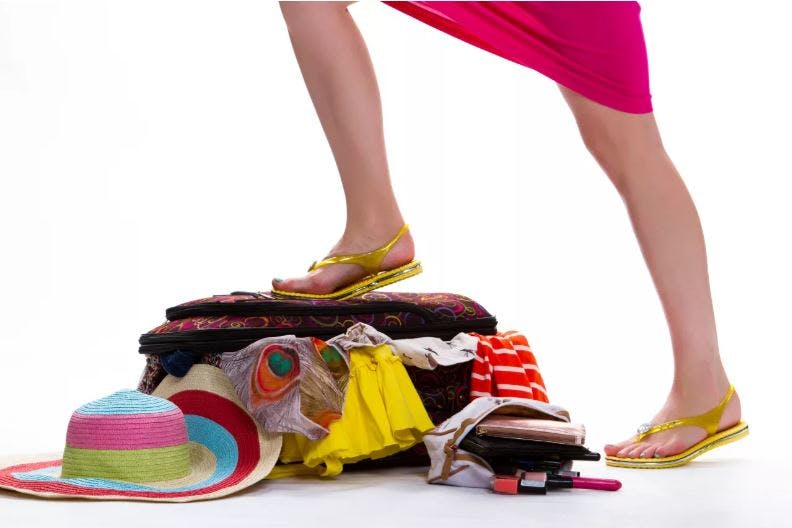 9. You could smoke while flying

Smoking on planes had yet to be completely banned by 1993, with some carriers still retaining cabin sections for tobacco-toking.

British Airways took until 1998 to fully outlaw smoking at 45,000 feet; by 2000, almost all other airlines had joined them. Today it’s rare to find a city bar where one can puff away, let alone a jumbo jet. 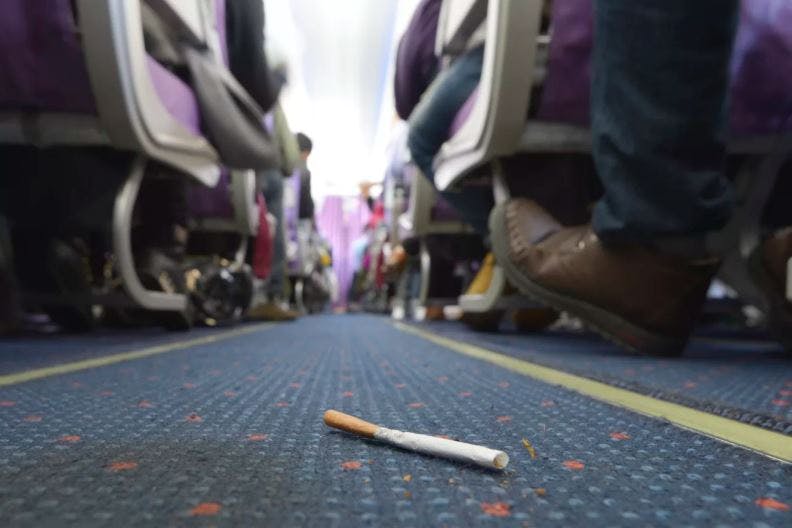 Want to find out more about our brand-new DK Eyewitness Travel Guides? Check them out here.

In transit with World of Wanderlust author and blogger Brooke Saward.

Brooke Saward reveals nine traveller types, and tips to deal with them.

Where should your next adventure be?

Take our World of Wanderlust-inspired quiz and find out.