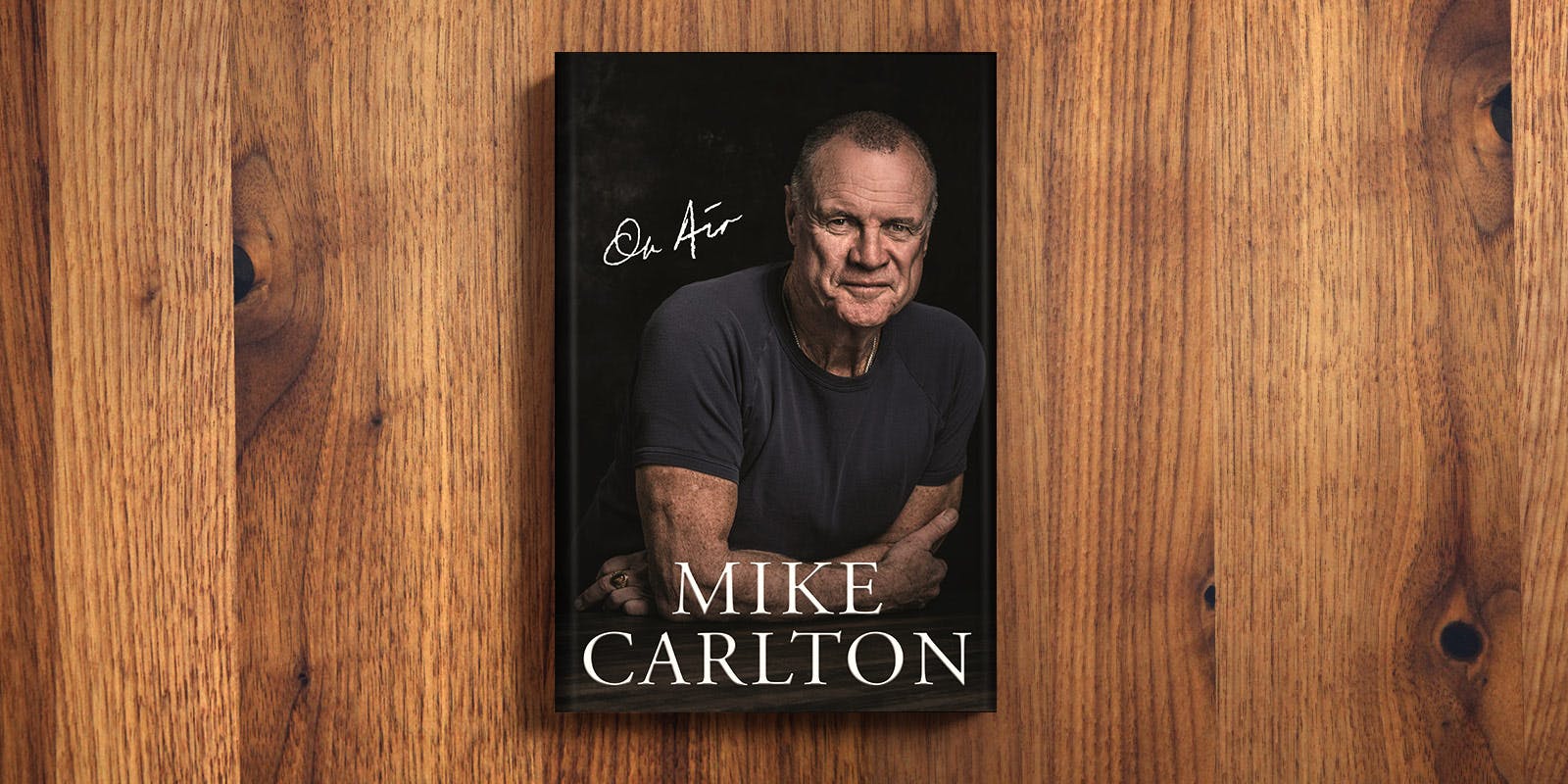 Some early career signposts from one of Australia’s most celebrated journalists.

Mike Carlton left school at sixteen to begin a life in journalism. Eventually, he became one of Australia’s best-known media figures. But in the beginning he, like all worthy journalists of his time, had to earn his stripes and pay considerable dues. From the pages of his no-hold-barred memoir On Air, here we’ve gathered five notable ‘firsts’ from his time as a fledgling ABC journalist.

First day as a cadet
The reporters’ room had about six battle-scarred wooden desks, on which sat overflowing ashtrays and some of the first typewriters ever made, clunky black Remingtons and Underwoods invariably missing a key or two, and usually tipped on their backs when they weren’t in use. In one corner was a bank of radio receivers that were tuned to the police, fire brigade and ambulance frequencies; they squawked and farted, monitored by a reporter known as the Emer­gency Roundsman. In their room, the four or five sub-editors sat around a U-shaped table, with women who would type the bulletins from the copy scrawled with corrections and markings. There was another, even smaller room in which the teleprinters sent and received news from interstate and overseas. The little studio where the news bulletin was read sat in another corner, behind double wooden doors. On the floor below there was a rehearsal room for the Sydney Symphony Orchestra, then owned by the ABC. Every so often, without warning, the entire building would be rocked by tweets, plunks and bangs as they tuned up for Beethoven’s Fifth. It was heaven. All I had imagined and more. I had passed the Leaving Certificate with honours in English and economics, but to hell with university. Here was life!

First breaking news story
It was 29 January, two days before my seventeenth birthday, a sleepy summer Tuesday afternoon. The senior cadet, John Lawler, a seasoned veteran of twenty-four, and I were the only available bodies in the newsroom. The police and ambulance radios crackled into life: a shark attack in the harbour, possibly fatal. The chief of staff burst from his office. ‘Get going, Lawler, take Carlton with you!’

Johnny Lawler, bless him, owned a Triumph TR3 sports car, shiny in British racing green. With the top down, he gunned it out of the Cross like Juan Manuel Fangio, and we vroomed across the Harbour Bridge towards Middle Harbour, me navigating with a street direc­tory. I have not had a more exciting ride, ever. God, was journalism always like this?

First published words
The first job I covered by myself, and the first written words of mine ever broadcast, were about a Girl Guides’ afternoon tea. A new chief Guide had been installed in office. I gave it all I had, as if it were the Queen opening parliament.

'Not bad,’ said the chief sub-editor, Sid Mounsey. ‘Now go back and take out all the adjectives.’

First car
Sex was still my chief preoccupation. For all the feeling and fumbling, I had yet to do it. Other guys had; at seventeen, I was in serious danger of being left behind. The problem was solved after I persuaded my mother to go halves with me in a car. We scraped together a deposit and became the proud owners of a brand-new, sky-blue Morris 850, the famous Mini Minor. It was the first car our family had ever had. No matter that it was hardly bigger than a supermarket trolley, or that it barely had enough power to pull the leaves off a wet lettuce. It transformed our lives. No longer reliant on trains and buses, Enid could visit friends or go to my brother’s school sporting events. I had it most nights and weekends, for parties or trips to the beach – and, eventually, for sexual triumph.

First question for the prime minister
Understandably, I suppose, Robert Menzies regarded the Mascot pack with weary contempt. When returning from one of his junkets to Britain or the US, he would deliver a short statement for the cameras, take no questions and march from the room. When he came back from Washington in 1964, I was ordered by the chief of staff, on pain of death, to ask him a question written for me.

‘Ladies and gentlemen,’ the PM began when he arrived, ‘I have had important talks with our great friend President Johnson at the White House. I have had a long and tiring flight home, and have nothing more to add at this time. I shall make a full report to parlia­ment in Canberra next week.’ Then, as usual, he turned from the bank of microphones and moved for the door.

Quaking in my boots, my voice an octave or two higher than normal, I stepped forward. ‘Mike Carlton, ABC Television,’ I squeaked. ‘Prime Minister, what did you discuss with the President?’

There was a silence as deep as the grave. It went on for about a year. The entire airport screeched to a halt. Aircraft on finals aborted and went around again. Open-mouthed, Menzies’ praetorian guard and my colleagues in the press pack stared at me in horror and amaze­ment. Ming himself stopped mid-stride and swung back, his famous eyebrows knitted together like copulating caterpillars.

His eyes drilled into mine. ‘I’ve not seen you before,’ he boomed. ‘And I have no wish to see you again.’

On Air is Mike Carlton's story, no holds barred.

Rapid-fire questions for one of Australia’s best-known broadcasters and journalists.