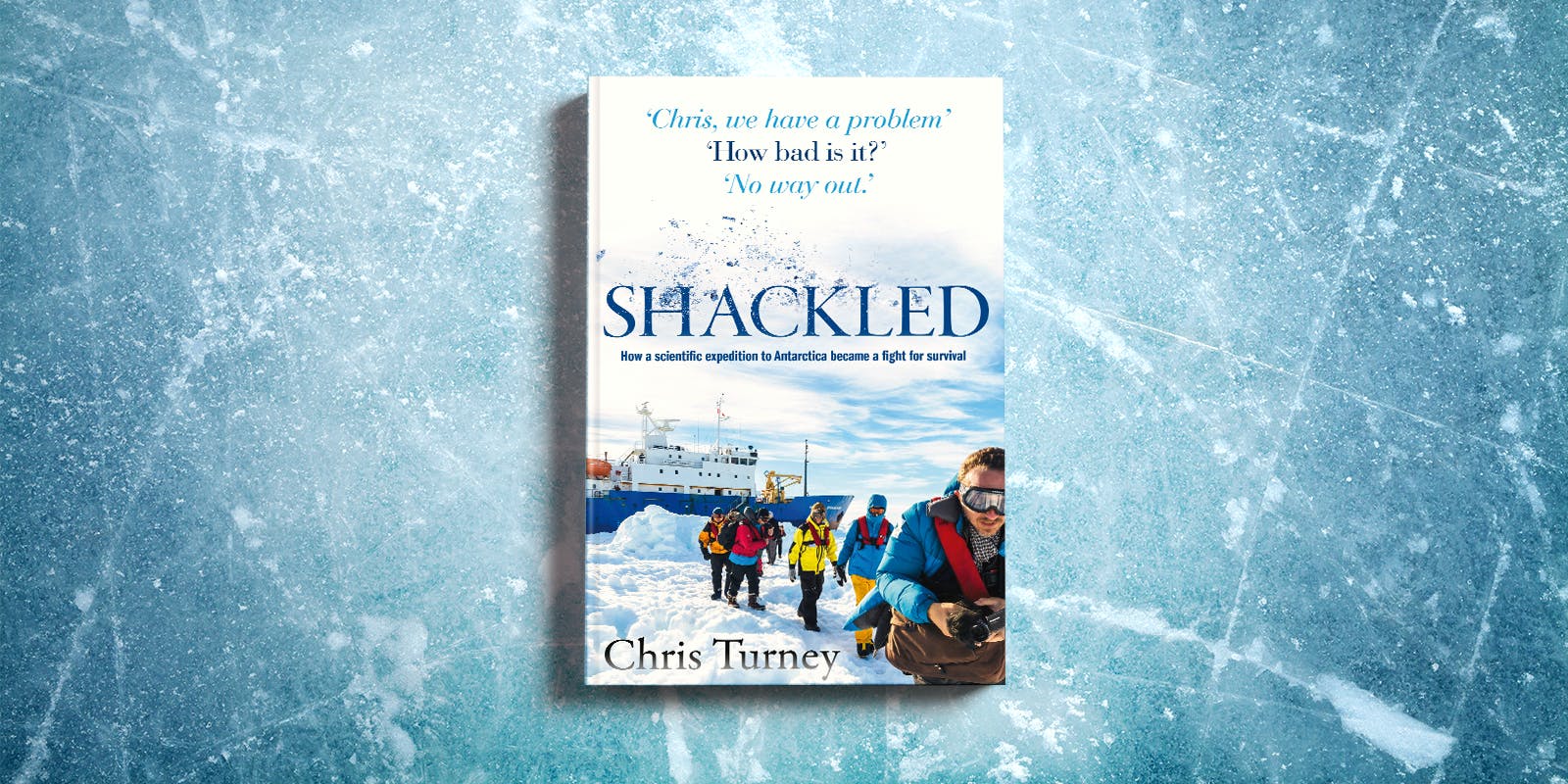 The final preparations for a journey to the bottom of the world.

In 2013, when Australian-based scientist Chris Turney’s Antarctic dream turned to nightmare, the plight of his ship the Shokalskiy, and the 71 people on board – among them, his wife and children – was broadcast around the world. We watched, listened and read as they became trapped on Christmas Eve, the hull of the ship pierced by a tower of ice. Shackled is Turney’s dramatic account of the ill-fated voyage and rescue, set against the backdrop of the compelling history of Antarctic exploration and inspired by fears for the continent’s future. In the passage below, the nervous crew are invited to experience the cramped confines of the lifeboats for the first time.

This is it. This is for real. We’re heading for the Antarctic.

It’s two o’clock in the afternoon, 8 December, day twelve of the expedition. The Shokalskiy only returned to Bluff yesterday and we’re already leaving again.

Only two hours ago, immigration officials were on board stamping our passports for departure from New Zealand waters, something we didn’t do on the first leg. Now we’re off. Grey clouds threaten rain, but most of the team have come up to the top deck to say their goodbyes to loved ones at home, milking the last phone reception we’ll have for four weeks. There’s a palpable sense of excitement in the air as photos are taken and messages sent. Our connection to the world is about to become a whole lot smaller.

I’m nervous. We’re heading beyond the subantarctic islands this time. We may have the best possible ship, team and equip­ment, but I know my history. Almost all expeditions that set out for Antarctica thought they were well prepared, and few returned with plans fulfilled. All too often, carefully designed science pro­grams went awry because of a change in conditions. Some never returned at all. Shackleton left with high hopes and came back a scarred man; Mawson nearly lost his mind over the loss of two friends. No one sails to the Antarctic without thinking twice. We’re going somewhere far beyond immediate help; somewhere that can never be taken for granted. We will have to work hard as a team and trust that the conditions favour us if we’re to achieve all we’re aim­ing to do.

It’s a moment to savour with the family. Few have worked harder to make this expedition happen. And now we’re about to share our biggest adventure yet. Cara and Robert are chatting excit­edly, taking their last look at land and adjusting to the feel of the ship. They spot my parents, Ian and Cathy, who have travelled from their home in Christchurch to see us off. Next time we see them, the Shokalskiy will have travelled more than 5500 kilometres across the Southern Ocean. We exchange exaggerated waves with the two small figures on the promontory. Mum and Dad look tiny against the rocks.

I breathe in deeply and catch a last waft of trees, tinged with sea spray. It’s a reassuring smell of land, of safety. A trawler passes by, struggling against the current running offshore, its turquoise hull stark against the green promontory of Bluff.

Everything seems very small out here.

I put my concerns to one side and turn to Annette and give her a hug. ‘Amazing to be finally off, isn’t it?’

All of a sudden, the siren blares out across the ship’s tannoy sys­tem. Lifeboat practice.

Everyone on the Shokalskiy has an allocated space on one of the two lifeboats. If anything untoward should happen, you need to know where to go. In an emergency situation, the last thing you need is confusion and panic as people struggle to find space on a lifeboat.

Donning our bulky orange life jackets, we make our way to the stern and join the good-natured queue. We’re on the port side with the kids, and head towards Nicola the cook at the bottom of the lifeboat ramp. Smiling, she ticks us off the list as we climb into the brightly coloured vessel. We sit snugly side by side in the small orange capsule. There’s hardly room to breathe, let alone move about. There are twenty-five of us inside, but the lifeboat can carry twice this number. A few whispered conversations break the silence. Minutes later, the last of the team are in and the hatch is slammed shut. The temperature immediately starts to rise. The lit­tle light that pierces the dimness comes from a small window above the steering wheel in the stern.

There’s a hushed silence as the broad shoulders of Vladimir make their way through the heaving mass to the stern.

‘Welcome aboard. I am the second mate and safety officer. We have in this lifeboat some water, some foods and fishing equip­ment. Now we’re starting the engine and check. Please.’

Vladimir turns to another Russian crew member, who presses the starter motor. The engine splutters to life. Oars hang from the ceiling in the event that all else fails.

We’ll only be using the lifeboats if Igor decides the Shokalskiy offers absolutely no protection. With wild seas, near-freezing tem­peratures, and the threat of bergs and sea ice, getting into a lifeboat in the Southern Ocean is only ever a last resort. With the vessel’s sense of claustrophobia, the darkness and the choking smoke from the engine, the possibility of using it as refuge is not something to dwell on.