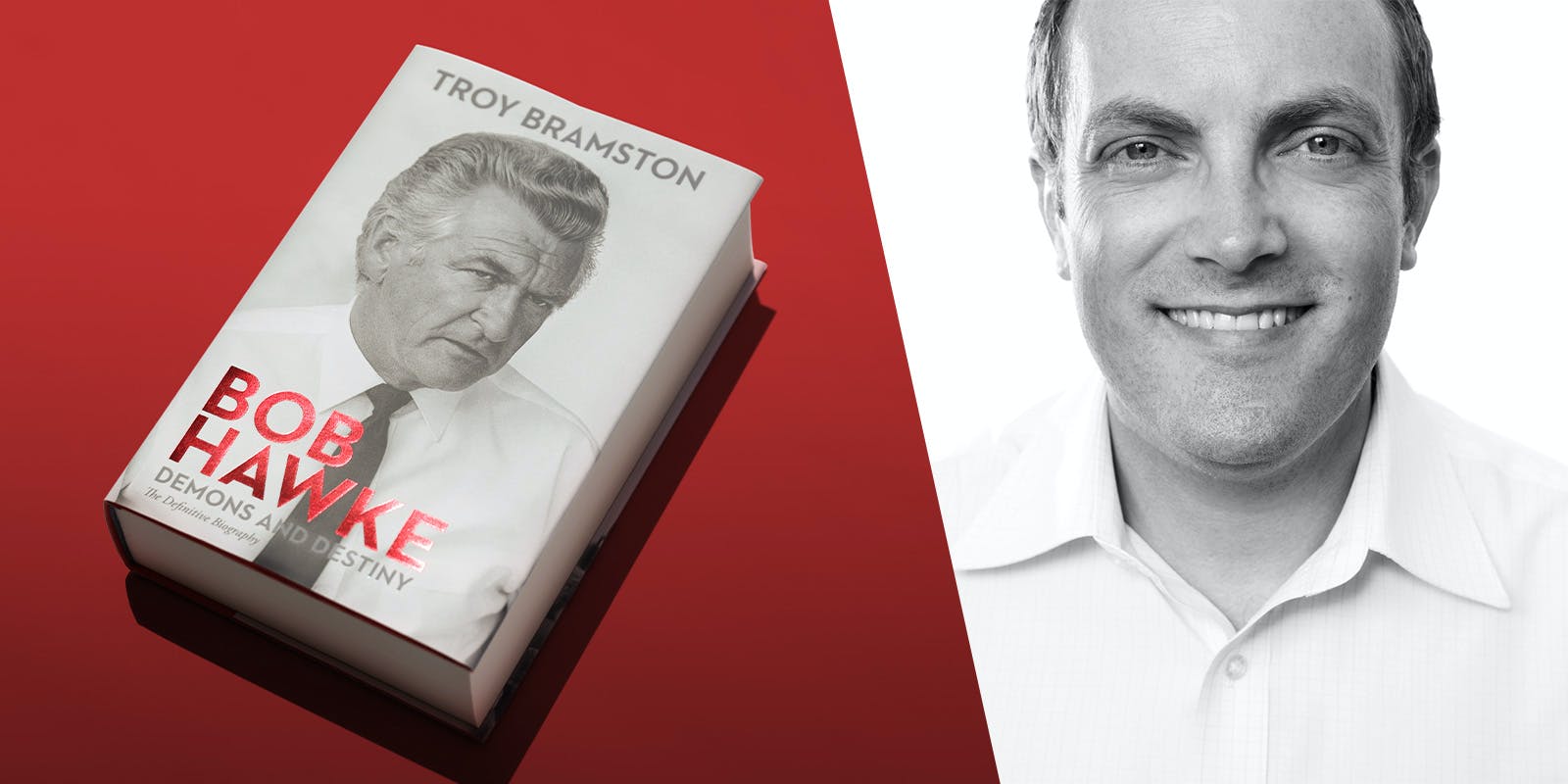 Troy Bramston has interviewed more than 100 people, combed through more than a million pages of archival documents and pored over 100,000 newspaper articles to give us the truth about former prime minister Bob Hawke.

Troy chats to us here about his full-life biography Bob Hawke, which includes details about the former prime minister’s diary entries, his final interview before his death and the demons he battled while also managing to be one of the country’s most effective leaders to date.

Why were you interested in writing a full-life biography about Bob Hawke?

Bob Hawke was such a larger-than-life figure in Australian history. He was a trade union leader in the 1960s and in the 1970s there was a huge expectation that he would go into politics and perhaps one day become prime minister. He went into parliament in 1980 and just a few years later he was the prime minister. There’s a larrikin superstar element to Bob Hawke’s life before his prime ministership, but he was also deeply flawed in his personal life. He led a reformist government that transformed and changed Australia over a nine-year period. We have not really had a book about Hawke before that made full use of the archives available and was a balanced portrait, and my goal was to re-examine Hawke and his life and his legacy, but do it in a even-handed way using new interviews and new archives.

Were there any surprising discoveries you made while researching the book?

There were a lot of discoveries I made. Hawke gave me access to all of his personal papers; many things that had not been made public before. He also sat for a series of interviews, including the last ever interview he gave just a few months before he died. Having access to him and his papers opened up a new world in terms of understanding who Bob was. What I came away with was a picture of somebody who was deeply flawed, who grappled with demons in his life – particularly with alcohol, infidelity and his emotions. But he was also somebody who was a better prime minister than most people think. When I talked to his former colleagues and ministers and staff, and even people overseas like former president George H.W. Bush, they only had great respect and admiration for him on the world stage. In a nutshell he was more deeply flawed than we thought but probably a more effective prime minister than what we thought as well.

Can you tell us more about some of the demons Bob Hawke was battling?

We know he was a big drinker and he was a womaniser, but the drinking was really out of control and almost killed him on a number of occasions – he nearly drank himself to death in the 1970s. When he drank he could get very verbally and sometimes physically abusive towards people, and that kind of behaviour would not be tolerated today. In terms of infidelity, I had to examine this because a lot of people have written he was a womaniser, but what does that really mean? What I discovered was a man who had hundreds, and possibly thousands, of affairs. There were several women he had long-term relationships and secret relationships with, and I also say quite clearly he had affairs while he was the prime minister, including at The Lodge. This had a big impact on his marriage and his ability to be a father. I interviewed two of his children – Stephen and Susan – they love their father very much and he loved them, but they had a difficult upbringing. They lived with the wild emotions, the verbal abuse towards their mother, the drinking, the womanising – they saw it all and knew it all and had a difficult upbringing. Bob never denied any of this and he never lied about it. When I asked him about the drinking and womanising he was quite open and frank about it and said to me he wasn’t a good father or husband. This wasn’t someone who had a secret past, but I discovered the extent of it, and that will shock people.

You talk about conducting the last interview with Bob Hawke before he died, what was that like?

The last interview was very deeply affecting. Sitting with Bob at his home, I could see he was a man who was coming towards the end of his life. I could see that he was fading and he was unwell. He was sharp in the mind but he was giving up. I quote at the start of the book that he said he’d be happy if he didn’t wake up tomorrow, which is a sad thing for anyone to hear, especially from such an iconic political leader. He felt his body was giving up and he achieved everything he wanted to achieve and it was time to go. After doing the interview I left his house and sat in the car out the front and thought about it for a while and I realised this was a big moment. I was a little bit shocked about it, though of course I didn’t know he was going to die three months later. It was maybe the 20th interview I had done with him over the years. He was very emotional talking about his parents. His parents were long gone but he had this deep affection and love for his parents and they for him. One of the stories in his life was this deep emotional bond with his mother and father and it is significant that at the end of his life, this is what animated him the most. I asked him about Ronald Reagan and Margaret Thatcher and all these world leaders but what animated him the most in that final interview was his parents. One of my objectives in this book is to rediscover the real Bob Hawke and that’s really what this book is about. In recent decades we have had the Bob Hawke legend in public life and the real man has been somewhat obscured and the legend has been amplified. In this book I am trying to rediscover who he was, his personality, and re-examine his prime ministership and his legacy.

Can you tell us about some of the never-before-seen documents you discovered?

I was able to look at things from his prime ministership like cabinet papers and handwritten cabinet notes. One of the biggest discoveries I made about Hawke’s early life was that his father Clem wrote a memoir that was never published, and that gave me an insight into Hawke’s early family life. Hawke also kept a couple of diaries when he was in his early 20s, and one of those diaries details a trip to India in 1952 where he attended a student Christian conference. In that diary he writes about how he was a strongly committed Christian but he lost the faith on that trip because he saw widespread poverty and couldn’t understand how the church could reconcile its teachings while people were living in such dire circumstances. In a diary from 1953 he was on his way to Oxford University travelling on a ship at sea. He stopped off in South Africa and there he witnessed apartheid, the persecution of black South Africans by white South Africans that would trouble him for years to come. He wrote there would be “a day of reckoning”. Fast forward 30 years and as prime minister he is one of the world leaders in the fight to end apartheid and free Nelson Mandela from prison. The interesting thing about being a biographer is you know how the story ends and you can look back on events throughout a life and find markers of significance. As a young man he had an instinctive and repulsed reaction to people being persecuted for their race.

What did Bob Hawke think about the state of politics today?

He was very disillusioned with the state of politics today. He thought it was too tribal, too divisive, and he worried we weren’t attracting the best and brightest politicians we could. He was worried about the impact of social media and thought there needed to be more room for bipartisanship between parties. He wanted to see business and unions come together more often in the national interest. At the end of his life he was disappointed and a little bit disillusioned by the very different style of politics to what he practised. He wanted to unite the country and work across the political divide, and he had significant support from the Australian community for that. He lamented it was not happening today.

How do you think politicians today compare to Bob Hawke?

The truth is there is no comparison. We’ve never had a prime minister who was more popular, who won more elections in the past half-century, or who more fundamentally changed the nation. There is only one Bob Hawke and there’s been nobody like him since and we will probably never see another politician like him.

What do you think people will get out of reading the book?

I think people will be shocked and surprised to learn about the new details about Hawke’s personal life, but will also gain a new appreciation of what a very effective prime minister he was. He was the most popular prime minister since World War II and somebody who had a deep affection for the Australian people. He ran a government very effectively and is somebody who left a vast policy legacy. He was a significant prime minister but a deeply flawed person. I think Hawke’s personal journey is one of redemption, one of reform and he had a life of stunning highs and terrible lows. He constantly grappled with demons and he did that successfully enough to change himself and the nation. It’s a rollercoaster ride and an extraordinary journey, but it’s an important story for Australians to understand. There needs to be better appreciation for who Bob Hawke truly was – the true man behind the legend.

After reading Making Australian History, you will think about this country differently.