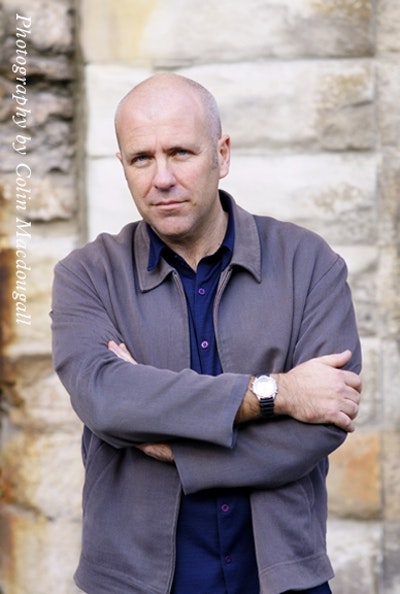 Can you pinpoint the moment The Living Sea of Waking Dreams entered your life?
Living in Tasmania I became very conscious that many beautiful things – wondrous, extraordinary things: animals, birds, fish, even places that I loved – were on the verge of vanishing and my grandchildren would never know them. The swift parrots near my house, the forty-spotted pardalotes outside my writing room have perhaps a decade or two left. The red handfish a few bays from where I am writing this were declared extinct a month ago: the first fish species in modern history to become extinct. Beaches are vanishing. Rainforests burning. I suddenly understood we were living in the autumn of things. And yet everyone went on as though these things weren’t happening. The world was vanishing and if you pointed it out they pointed to their phones: it might be sad but it didn’t affect them. And then the Tasmanian fires came, and the following years the Australian fires, and now Covid, which even experts as eminent as America’s Dr Anthony Fauci say is directly related to our destruction of the environment: as it vanishes so too now are we.

At the height of the Tasmanian fires in early 2019 I went to stay with friends who were working as lighthouse caretakers on Maatsuyker Island, an extraordinary remote island south of Tasmania which, save for them, is uninhabited. I had been working on another novel for two years, but I felt something like a scream building inside me that the manuscript didn’t touch. I was also aware that I wanted to put kindness and gratitude at the centre of whatever I was writing and yet I couldn’t. There seemed such a power to both things that went largely unremarked and yet seemed so important.

It was an eighteen-hour trip on a crayfishing boat and I was ill almost the entire way. Maatsuyker is home to perhaps a million muttonbirds, seals, endless wind and the noise of waves battering the cliffs. I sat in the weather observation hut which had the most marvellous and panoramic view of the ocean, a few scattered islands, and the distant, wild south-west Tasmanian coastline, and it was there, finally feeling free and unblocked, accompanied by wind thud and shriek and seal bark, I began to write. It was there that I found the voice I needed, the tone that allowed me to say what I hadn’t hitherto known, as the story grew within me.

The relationships between the four siblings can feel excruciatingly familiar: is it possible to explain how you came to know them?
I have to confess I made them up. It begins with a story one of my daughters told me one night over dinner. She works at a hospital: there was an old man who had been admitted who was dying and ready to die. Only his family – wealthy, privileged, powerful – would not allow it, it somehow offended them, and slowly he was passing into an indeterminate world where he neither died nor lived but simply suffered. It occurred to me that we no longer know how to die because we no longer know how to live. We want to live forever but we never wish to be old, and not wishing to age we cannot bear to be confronted with the old: we avoid them, we lock them away, we are troubled when compelled to visit them. We wish them gone but we will not let them go. And so I created a family to tell that story.

And of what importance, would you say, is listening to our elders?
When I am out in traditional Indigenous communities I am consistently struck by the respect shown to old people. I am struck by it because it has largely vanished from our culture, while for Indigenous people it is a source of strength, of knowledge, of balance, of leadership, and of community. And at this moment in time – when we need these things more than ever – we turn away from those who could offer it to us.

By directly referencing events in our very recent history, you’re writing in what’s close to real time. Writers like yourself here, Ali Smith with her seasonal quartet, even Behrouz Boochani with No Friend but the Mountains, are exploring current events in longer-form writing. What do you see as some of the benefits of writing in the now (or, at least, very close to it)?
I wanted to show that realism was the least effective way of conveying the extraordinary reality of today. Fables are normally set in some make-believe land – even Kafka’s Prague is very much Kafka’s Prague. I was intrigued by writing a story that was at once a fable but a fable happening now. I hoped it would allow people to see their world anew – without cataracts, without blinkers – which is what novels should do.

By the early winter of 2019 it was clear to even an ignorant novelist what our federal government refused to acknowledge: that the summer of 2019-2020 would almost certainly see something similar and terrible to the Tasmanian fires take place on an immensely larger scale in mainland Australia.

I drafted the novel through 2019 with the intent of rewriting it in real time during the 2019-2020 summer, letting whatever those events might be dictate the final narrative and mood of what would be written. I wanted the novel invested with the urgency, the fear, the collapsing sense of time and possibility that such apocalyptic events create. By grounding an absurd, comic story of a woman who starts losing body parts in two very concrete, terrible realities – the minutiae of her mother dying in hospital along with the indirect experience of bushfires – the unbelievable becomes plausible, the plausible possible, and reality revealed as utterly unrealistic.

Can you see the form (or function) of the novel changing in any dramatic ways, in order to be more timely or urgent?
The novel has to be novel to endure, to retain meaning. Every book I write I seek to do something new and not return to the same style, techniques and forms. If the novel isn’t about change it isn’t about anything.

What do you see as the role of the novel in a nonstop barrage of words, news, opinions, ‘influencers’, Twitter, Facebook, ‘food philosophies’ and the rest of it?
I have no idea what the role of the novel should be. I only know that novels remind me that I am not alone. And at such a time in human history do novels need any other defence?

Social media is the greatest misnomer of the age. It would be better called iso media: forms manipulated on the one hand by algorithms designed to maximise profit no matter where they take us, and on the other by dark actors seeking to divide and control, a key driver not of community but of an epidemic of loneliness.

Tommy makes a profound statement near the beginning of the book: ‘Is translating experience into words an achievement at all? Or is it just the cause of all our unhappiness? Is it our tragedy and our ongoing conceit? The world gets carried away with words, phrases, and elaborate paragraphs. One word leads to another and soon enough you have affairs, wars, genocide and the Anthropocene. Silence, according to Tommy when in his cups, is the only place where truth can be found.’ If Tommy’s right, why write?
Who knows if Tommy is right? Maybe he is or maybe he isn’t. Novels like life contain many different ideas and views, and Tommy’s is just one more. The beauty of books is that unlike politics it’s not reducible to an argument that must be won or lost.

Novels aren’t the answer, but hopefully they ask the right questions.

This novel is, in a way, about all the things that are vanishing, and among that vanishing even the meanings of words are becoming vaporous. Every book is about the impossibility of words and, at the same time, their utter necessity. We are always seeing through a mirror darkly.

And, in particular, what continues to drive you to write?
I have no idea. What was once a passion is perhaps now all I know how to do.

Francie has very few speaking parts, but makes this revelatory statement: ‘There is so much beauty in this world… And yet we never see it until it is too late.’ Of what importance, would you say, is observing the beauty that surrounds us?
I think beauty is a form of truth and, correspondingly, truth is a form of beauty. These are old ideas, but I do think at its best the novel restores to readers’ eyes a sense of wonder with their world, which is also a sense of gratitude.

But as Lisa Shahn wonders near the end of the book: perhaps we are scared of beauty. Perhaps we are terrified and that’s why we destroy it.

Bushfires, institutional abuse, suicide, the unravelling of families, mental illness, environmental devastation, drug addiction, despondent youth – you take yourself (and readers) into some dark terrain here. What would you say to the notion that you/I/readers/everybody need to experience the darkness before truly understanding the message of resilience/rejuvenation/hope/continuation that the book ultimately reveals?
I would hope that the book is more interesting than that, stranger and more mysterious.

Despair is an easy cynicism, and cynicism is the new naïveté. Hope is what we have. Not until people are really tested do they know who they are and of what they are capable. Some of what we learn about ourselves is disappointing. Some of it is horrifying. Some of it is remarkable. But we have to know what is at stake to be capable of hope. To be kind to others when they fail us as we fail them. When we fail ourselves.

The book is also a celebration of the natural world. In what ways do you enjoy Tasmania’s (or anywhere else’s) natural environments?
With grateful wonder.

Why are you hopeful?
Why not? It remains such a beautiful world. If we can just see the world for what it is and what it offers we would not give up on it. So much blinds us: novels are one form that can help restore a necessary sense of wonder and, with it, humility.