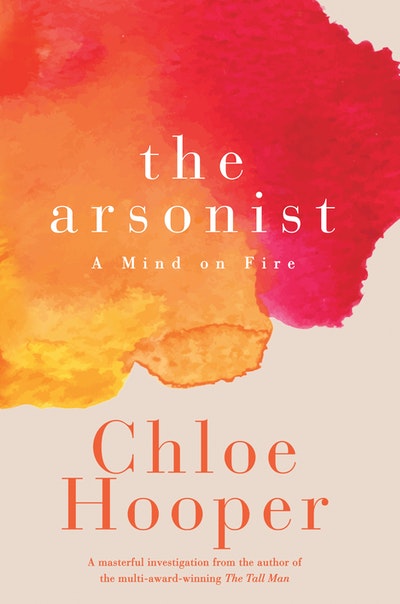 On the scorching February day in 2009 that became known as Black Saturday, a man lit two fires in Victoria’s Latrobe Valley, then sat on the roof of his house to watch the inferno. In the Valley, where the rates of crime were the highest in the state, more than thirty people were known to police as firebugs. But the detectives soon found themselves on the trail of a man they didn’t know.

The Arsonist takes readers on the hunt for this man, and inside the strange puzzle of his mind. It is also the story of fire in this country, and of a community that owed its existence to that very element. The command of fire has defined and sustained us as a species – understanding its abuse will define our future.

A powerful real-life thriller written with Hooper’s trademark lyric detail and nuance, The Arsonist is a reminder that in an age of fire, all of us are gatekeepers.

In Hooper’s sure hands the grimmest details become exquisite imagery. Strange to report, there can even be beauty in arson’s aftermath.

An extraordinary well-written and stirring account. The first half of the book is a masterclass in writing engaging true crime.

Like the best historians, Hooper recognises her complex responsibilities to past and present, to her historical subjects and contemporary readers. The Arsonist is a brilliant and moving book about ecological devastation and social desolation.

Hooper’s sense of journalistic duty is as present here as it was in her acclaimed 2008 book The Tall Man.

If not handled carefully, reconstruction narratives can turn stories into unsolvable puzzles. This is because they derive their narrative coherence from atomised sources that often conflict with each other. While Hooper does allow her multiple characters many digressions, The Arsonist achieves its clarity through strict linear chronology. The characters offer myriad interpretations of Sokaluk’s motivations which Hooper does not adjudicate; there remains space for the reader to decide what they believe to be true about the fires and about the arsonist.

If Hooper has uncovered a truth, it is how years of casual cruelty can make an individual so ambivalent to their neighbours. Excluding the 'different' might be a failing for which society pays dearly.

Homing in on one man, one investigation, one court case and one small regional community, Hooper tells a much bigger story of fire in Australia, deftly bringing in its sociological, cultural and environmental dimensions.

We will all learn something from the devastating events that scorched a community and the way in which [Hooper's] storytelling draws a reaction.