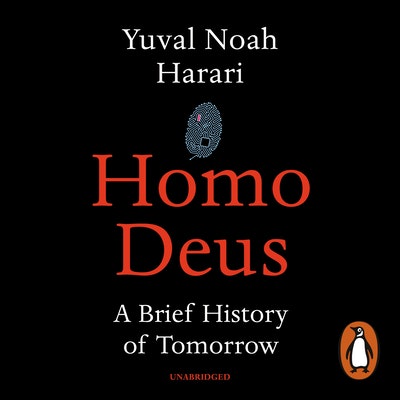 A Brief History of Tomorrow

Sapiens showed us where we came from. Homo Deus shows us where we're going.

Sapiens showed us where we came from. In uncertain times, Homo Deus shows us where we're going.

Yuval Noah Harari envisions a near future in which we face a new set of challenges. Homo Deus explores the projects, dreams and nightmares that will shape the twenty-first century and beyond - from overcoming death to creating artificial life.

It asks the fundamental questions: how can we protect this fragile world from our own destructive power? And what does our future hold?

'Homo Deus will shock you. It will entertain you. It will make you think in ways you had not thought before' Daniel Kahneman, bestselling author of Thinking, Fast and Slow

Homo Deus will shock you. It will entertain you. Above all, it will make you think in ways you had not thought before.

Even more readable, even more important, than his excellent Sapiens

An exhilarating book that takes the reader deep into questions of identity, consciousness and intelligence

A brilliantly original, thought-provoking and important study of where mankind is heading.

Spellbinding… a quirky and cool book, with a sliver of ice at its heart

An intoxicating brew of science, philosophy and futurism.

Yuval Noah Harari is the most entertaining and thought-provoking writer of non-fiction at the moment. As with Sapiens, you finish the book feeling much wiser

An exhilarating book that takes the reader deep into questions of identity, consciousness and intelligence… Harari is a naturally gifted explainer, invariably ready with a telling anecdote or memorable analogy. As a result, it’s tempting to see him less as historian than as some kind of all-purpose sage.

Sets out with enviable (and alarming) lucidity the massive challenges now facing our species as genetic technologies, AI and robotics alter forever our relationships with one another and with other species. It’s even more readable, even more important, than his excellent Sapiens.

I think the mark of a great book is that it not only alters the way you see the world after you've read it, it also casts the past in a different light. In Homo Deus, Yuval Noah Harari shows us where mankind is headed in an absolutely clear-sighted & accessible manner. I don't normally ask for autographs but I got a bit starstruck & asked him to sign my copy of his book after we'd had a conversation for my show on BBC 6Music. His inscription reads: 'The future is in your hands' - a good thing to remember when such great changes are afoot.

Spellbinding… This is a very intelligent book, full of sharp insights and mordant wit... It is a quirky and cool book, with a sliver of ice at its heart... It is hard to imagine anyone could read this book without getting an occasional, vertiginous thrill.

Like all great epics, Sapiens demanded a sequel. Homo Deus, in which that likely apocalyptic future is imagined in spooling detail, is that book. It is a highly seductive scenario planner for the numerous ways in which we might overreach ourselves.

Homo Deus is a sweeping, apocalyptic history of the human race, which reads more like a TED-talk on acid.

Harari is an intellectual magpie who has plucked theories and data from many disciplines - including philosophy, theology, computer science and biology - to produce a brilliantly original, thought-provoking and important study of where mankind is heading.

Like its predecessor, which sold in its millions, Homo Deus will have a world audience. Taking over where Sapiens left off, it looks forward to where history, ethics and gargantuan biotech investment might lead us - to the end, Harari thinks, of death, suffering and the very idea of being human.

A remarkable book, full of insights and thoughtful reinterpretations of what we thought we knew about ourselves and our history... One measure of Harari’s achievement is that one has to look a long way back – to 1934, in fact, the year when Lewis Mumford’s Technics and Civilization was published – for a book with comparable ambition and scope.

Harari is an exceptional writer, who seems to have been specially chosen by the muses as a conduit for the zeitgeist… Fascinating reading.

This provocative book analyses our present state – and makes startling predictions about the future.

Sapiens was a paean to humanity’s powers of collective imagination…with darker notes on how these mega-stories might direct our new, transformative, information and biological technologies. “Is there anything more dangerous than dissatisfied and irresponsible gods who don’t know what they want?” was Harari’s closing line. Homo Deus tries to answer that question, with all the pedagogic and encyclopaedic brilliance of its predecessor.

Brilliant, mind-expanding…explores where Homo Sapiens might go from here, via his signature blend of science, history, philosophy and every discipline in between.

His reasoning is laid out with a lucidity that makes it a joy to read.

Yuval Noah Harari is the most entertaining and thought-provoking writer of non-fiction at the moment. In Homo Deus he covers broad terrain, touching on everything from Zen Buddhism to the Second World War to how bats read the frequency of echoes, to explore the largest most difficult and sometimes frightening subject of all: our own future. As with Sapiens you finish the book feeling much wiser, but not having noticed any hard work along the way. I loved this book.

Sapiens showed us where we came from. Homo Deus shows us where we’re going

Challenging, readable and thought-provoking… He has provided a smart look at what may be ahead for humanity.