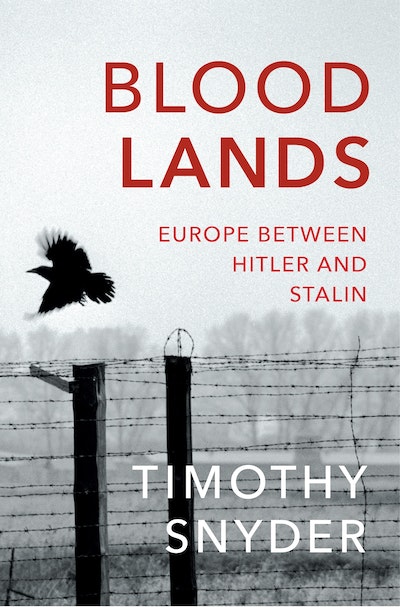 Europe between Hitler and Stalin

In the middle of Europe, in the middle of the twentieth century, the Nazi and Soviet regimes murdered fourteen million people in the bloodlands between Berlin and Moscow. In a twelve-year-period, in these killing fields - today's Ukraine, Belarus, Poland, Western Russia and the eastern Baltic coast - an average of more than one million citizens were slaughtered every year, as a result of deliberate policies unrelated to combat.

In his revelatory book Timothy Snyder offers a ground-breaking investigation into the motives and methods of Stalin and Hitler and, using scholarly literature and primary sources, pays special attention to the testimony of the victims, including the letters home, the notes flung from trains, the diaries on corpses. The result is a brilliantly researched, profoundly humane, authoritative and original book that forces us to re-examine the greatest tragedy in European history and re-think our past.

A remarkable study about suffering on an astonishing scale in Eastern and Central Europe in the 1920s, 1930s and during the Second World War

A hugely important historian of this nightmarish era. Nobody has explained it this way before

[Snyder's] use of Polish sources makes this book almost unique for English-language readers...superb

A stunning contribution...a synthetic account by an East European historian in which the focus is on the geographic zone where the lethal policies of Hitler and Stalin interacted, overlapped, and mutually escalated one another

Christopher R. Browning, author of 'Ordinary Men' and 'The Origins of the Final Solution'

Combining formidable linguistic and detective skills with a fine sense of impartiality, he tackles vital questions which have deterred less courageous historians... This is a book which will force its readers to rethink history

Norman Davies, F.B.A, and author of Europe: A History

A nuanced, original and penetrating analysis of Europe's twentieth century killing fields... History of a high order, Bloodlands may also point us towards lessons for our own time

Timothy Garton Ash, Professor of European Studies, University of Oxford, and author of The File

Economist, Christmas round up

A powerful, personal and occasionally controversial account of the human tragedy that unfolded across central Europe half a century ago

A superb work of scholarship, full of revealing detail... Snyder does justice to the horror of his subject through the power of his storytelling

An excellent, authoritative and imaginative book, which tells the grim story of the greatest human and demographic tragedy in European history with exemplary clarity. Snyder set out to give a human face to the many millions of victims of totalitarianism. He has succeeded admirably

An original, wonderful and horrifying book....this beautifully written and superbly researched work is undoubtedly one of the most important to emerge for a long time

An original, wonderful and horrifying book...this beautifully written and superbly researched work is undoubtedly one of the most important to emerge for a long time

Gripping and comprehensive...revisionist history of the best kind: in spare, closely argued prose, with meticulous use of statistics, [Snyder] makes the reader rethink some of the best-known episodes in Europe

Part of the fascinating rethinking of eastern Europe under Hitler and Stalin, and opens up a catastrophic landscape

Seeks persuasively and movingly to offer a new interpretive framework for the nightmare of Europe's mid-20th century.

Stephen Howe, Independent, Christmas round up

Snyder presents material that is undeniably fresh - what's more, it comes from sources in languages with which very few western academics are familiar. The success of Bloodlands really lies in its effective presentation of cold, hard scholarship, which is in abundance

Snyder steers clear of questions of moral equivalence between Soviet and Nazi atrocities, but instead highlights a perverse synergy between the two regimes in which their interaction, as allies or as enemies, always had the same effect of facilitating mass murder.

Financial Times, Books of the Year

The book throws a great deal of light on the policies shared by Hitler and Stalin (albeit for different purposes), especially starvation as a form of ethnic cleansing. It is a horrifying story but the wider emphasis should do much to give readers a more accurate understanding than is often presented

The figures are so huge and so awful that grief could grow numb. But Snyder, who is a noble writer as well as a great researcher, knows that. He asks us not to think in those round numbers