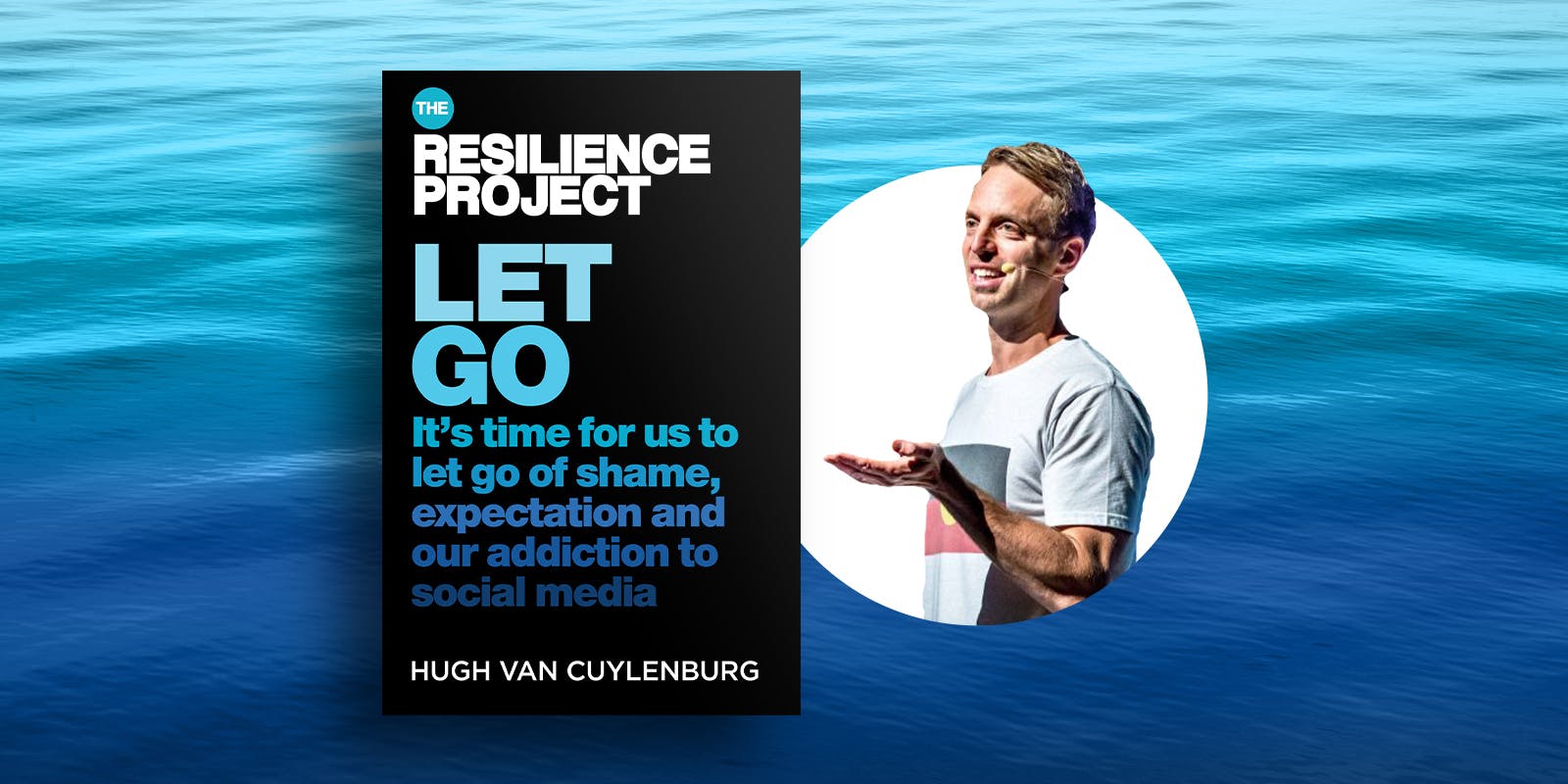 Hugh van Cuylenburg has bared his soul in his new book Let Go, candidly sharing his raw experiences and struggles with shame, expectation, control and ego.

As The Resilience Project co-founder, Hugh has dedicated his life to helping the wellbeing of others through gratitude, empathy and mindfulness. So when he admitted he was ‘utterly broken’ at the height of Melbourne’s Covid lockdowns, he knew it was time to seek professional help.

In his new book he writes about the discoveries he has made during his own therapy, and in a raw and honest account is sharing how he has learnt to let go of the shame he’s felt in the past, in the hope it will help others to do the same.

‘I feel very exposed and think that when I see people they’re going to look at me and say, “he knows he’s not very good looking or smart”,’ he says.

‘It feels strange and awkward but I just keep reminding myself it may help someone.’

As part of Hugh’s therapy, he learnt a practical three-step process that he believes can help people let go and accept their past.

The three-step process for letting go

Step 1: Separate who you are from what you did

‘A lot of us will make a mistake and think we’re a bad person,’ Hugh says.

‘We’re just so hard on ourselves and we have to cut ourselves from that. We need to say, “What I did was bad, I’m not a bad person,” they are two very different positions to put yourself in.’

Hugh says when we make a mistake we need to talk to ourselves about how we will learn from it and not make the same mistake again.

‘It’s an empowering position to put yourself in,’ he says.

‘My son got a Covid test and he screamed and was really scared. Afterwards, he said, “I’m the most scared person in the world and everybody knows I’m scared,” and I thought, “this is a shaming moment, he’s not telling himself he’s brave.”

‘I said, “What you did just then made you scared, but you’re not scared to go to kinder or on the trampoline.”

‘This is when I went to step two and empathised with why he was feeling that way.’

Step 2: Empathise with the real motivation behind your actions

Hugh says there are always reasons behind why we make the decisions we do, and it’s important to understand them and empathise with the motives behind our behaviour.

‘We should look back, and when I look back on my life it helps me to forgive feelings of shame,’ he says.

In his book, Hugh speaks about the shame he felt about spending time with his girlfriend instead of being at home with his family as his sister struggled with an eating disorder.

'Faced with the choice of being home, where Georgia’s condition was an ongoing source of grief, or going to my girlfriend Christie’s house, or the pub, or the cricket, or the football . . . for a young man it was no choice at all,' he says.

'Now that I’m in my forties, I can empathise with that young man. Furthermore, I forgive him. I was 18 and just wanted to feel happy – an understandable motive for my behaviour.'

While Hugh says sharing your shame can be the hardest part, it is one of the most vital steps to letting go.

‘It’s dangerous if you share it with the wrong person and they make you feel worse. It’s so important you go to the right person who will show up for you and they can imagine how you feel and say they’ve felt that before rather than tell you you’re being silly,’ Hugh says.

‘They are people who empathise with you. A psychologist is the best person, but not everyone has access to that. Even when I opened up to a mate it felt amazing.’

Hugh hopes sharing his own inner struggles will help empower others to open up to those close to them.

‘We are so busy trying to impress people and appear a certain way and it’s exhausting and not good for us mentally or physically.

'If a lot of us properly understood at a younger age that we’re enough as we are, we would save ourselves a lot of pain and struggle.’

Let Go is out now.

From the bestselling author of THE RESILIENCE PROJECT comes this deeply personal book about the importance of letting go.