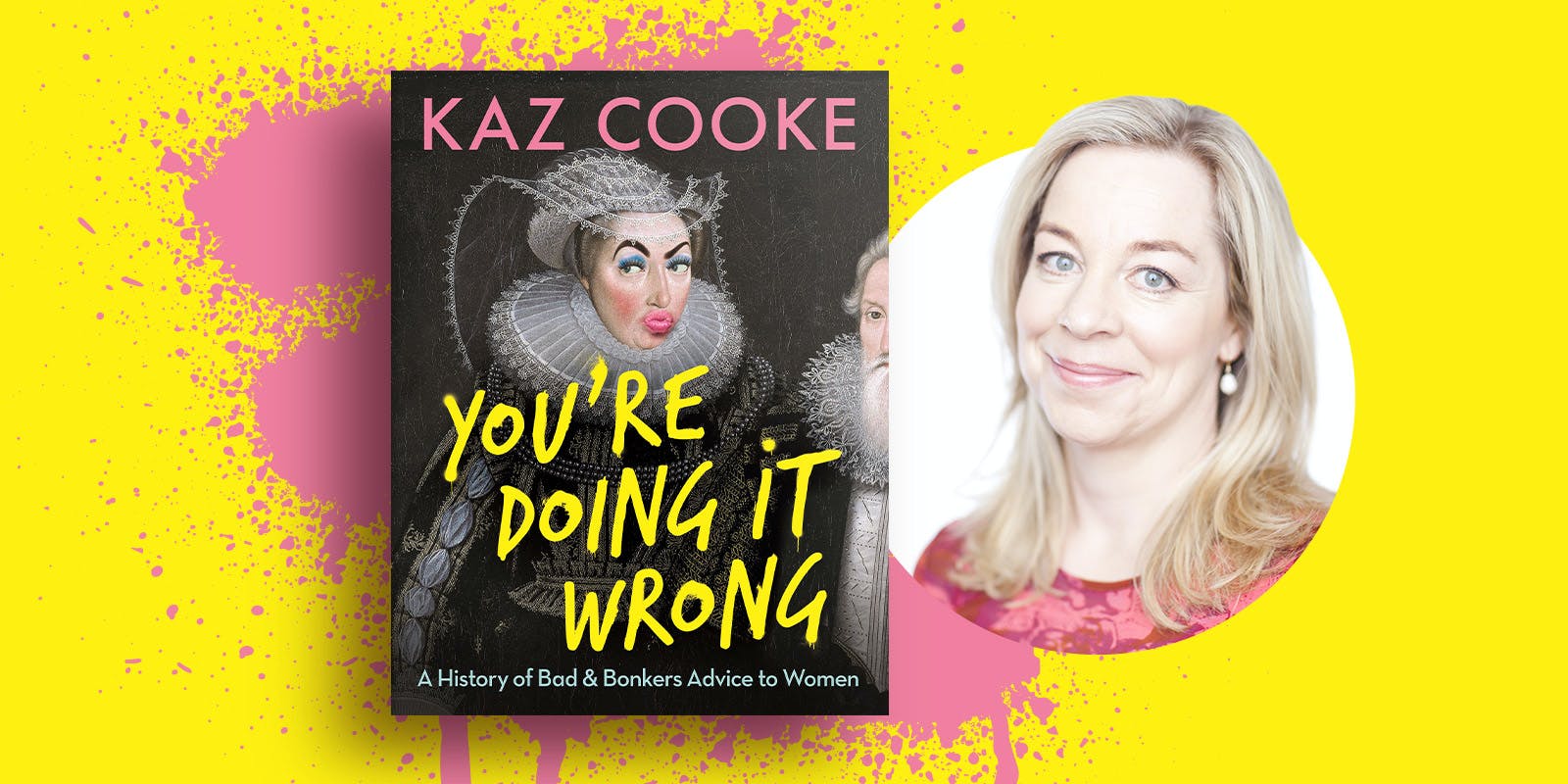 Kaz Cooke’s You’re Doing it Wrong: A History of Bad and Bonkers Advice to Women is filled with the hilarious and horrifying instructions women have been given, from 12th Century clergyman to the Kardashians (and nearly 300 crazy photos and illustrations).

This advice column is drawn from the book, and features real advice given over the centuries on health, beauty, work, fashion, behaviour, and whether women should be able to vote (of course not).

Disclaimer: This column is for satirical purposes only! For your own safety and sanity, do not follow ANY of this advice!

Q: How should I trap and treat a husband?

A: 'A woman must be a pleasant creature … women’s work is to please people; to feed them in dainty ways; to clothe them; to keep them orderly and to teach them.' – John Ruskin, Letters and Advice to Young Girls and Young Ladies: On Dress, Education and Marriage, 1879.

(Yes, that John Ruskin - allegedly rendered incapable of having sex for five years after discovering on his wedding night that his wife’s naked body was unlike the smooth marble statues he’d seen in museums. Was it her nipples or pubic hair, as rumoured, or perhaps he was terrified she had eyeballs … Anyway, I’m sure it made her feel tremendous. Well done, Effie Ruskin, for running off with the poet John Millais.)

Q: I’ve just gotten my period. What should I expect?

A: 'Menstruating women cause fruit to fall out of trees, grass to die and wine to sour. Nothing is more ‘monstrous’ than a period.' – Pliny the Elder, philosopher, 1st Century.

(At least he was scared of us.)

Q: How do I find romance?

A: 'Don’t talk to a man first and don’t talk too much, don’t accept a Saturday night date after Wednesday, don’t tell him what to do, let him take the lead, be honest but mysterious, and don’t live with a man (before marriage). Do the rules and you’ll live happily ever after.' – The Rules: Time-Tested Secrets of Capturing the Heart of Mr Right, 1995.

(One of the authors of this book got divorced during the publicity tour.)

Q: Should I wear a bikini or bandage dress to a BBQ?

A: 'Every girl ought to wear an apron all day. It at once stamps her character as careful, economical and exquisitely tidy.” – The Girl’s Own Paper magazine, 1880s.

(Girl’s Own also made the arresting claim that Eve in the Bible wore an apron. That was a leaf, ladies.)

Q: I’m getting married. Do I need to tell my workplace?

A: Yes, and then you will be sacked, because you should be at home, and men need to be in charge because women are too aggressive for management jobs, or any interesting jobs, and also too timid. - From various 20th Century Australian public service and private workplace rules.

(And STILL we put ‘woman’ in front of any job they do because it’s still, literally, remarkable. We say woman surgeon, woman astronaut, woman firefighter, because it’s still unusual enough, it’s still hard to get there, and every one who does has stories of dismissal, harassment and injustice because they’re women.)

Q: Should I consider having a baby without a partner?

A: 'An unmarried mother … may die of starvation, or disease. Young girls finding themselves in this tragic position have sometimes gone insane with worry … any child of an unmarried mother is called illegitimate. The child having no rightful name, is almost a nobody. These unfortunate children, and their mothers too, are often treated by unkind people as if they were mongrel dogs.' – Sex Instruction for The Adolescent Girl and The Young Woman: The Facts Without the Humbug, 1940s.

(How would you like to stick your head up your – oh, look, it’s the end of the question.)

Q: How can I be a good mother?

Q: Have I let myself go?

A: 'Hey, little girl, comb your hair, fix your make-up … don’t think because there’s a ring on your finger you needn’t try any more … there are girls at the office and men will always be men.' – Wives and Lovers song lyric, Burt Bacharach, 1963.

(The idea that a man’s plain face is fine, and a woman’s is not, is something few men think about. Every day and every night, men just get up and go out the door wearing their very own face. But women are somehow supposed to visibly ‘make an effort’, which then looks ‘effortless’.)

Q: Help! How do I achieve the perfect physique?

A: 'A well-formed woman should have her head, shoulders and chest small and compact, limbs relatively short; her haunches apart; and her hips elevated; her abdomen large and her thighs voluminous … Plumpness is essential to beauty … an excess of plumpness, however, is to be guarded against. Young women who are very fat are cold and prone to barrenness.' – Alexander Walker, 19th-century physiologist.

(Absurdly, Wikipedia calls him an ‘aesthetician’ – a fancy word for misogynist arse.)

Q: As a woman, why can’t I find an item of clothing with real pockets?

A: 'If we give women pockets they can use they abuse them … stuff them full of all sorts of things, making ugly bulges.' – London manager of a dressmaking shop quoted in the Daily Mail, Brisbane, 1923.

(Lack of pockets has become the emblematic annoyance for women. For centuries we’ve been told we don’t want them, and if we do want them, we can’t have them. It’s the quintessential bad and bonkers advice.)

No wonder women feel like shouting into a pillow

Kaz’s new book is filled with funny and infuriating bad advice, fibs, and her witty humour debunking everything women have been told:

‘We’ve disproven the inferiority of women in every realm, and still we get centuries-old versions of wrong advice repackaged and delivered through new technology. It’s still the same message: sit down and shoosh, stop being hysterical about your health, you need a man, do all the housework, think less of disadvantaged women, pretend white women are better than other women, get paid less for harder work, be a good mother, the standards of which are impossible, buy clothes but you’ll never look good in them, feel bad about your body shape, feel worse about your face. And furthermore, pretend none of this is happening,’ she says.

You’re Doing it Wrong is an outrageous tour through the centuries of bonkers and bad advice handed down and foisted upon women, told as only Kaz Cooke can – with humour and rage, intelligence and wit.