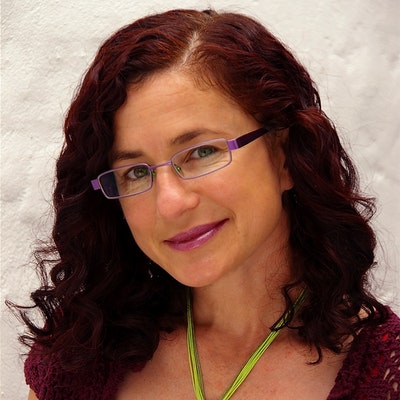 Deborah Abela is the bestselling author of the Grimsdon series, a thrilling trilogy of books that explores a dystopian, post-climate emergency world. The first book in the series, Grimsdon, celebrates its 10th anniversary in 2020, so we spoke with Deborah to look back at Isabella and Griffin's story a decade on.

How did the Grimsdon Trilogy begin?

I got cranky. About fifteen years ago I was furious that governments around the world were ignoring climate change. I kept thinking, I wonder what would happen if we keep ignoring it and something big goes wrong? So I flooded an entire city, and added sea monsters, flying machines and a feisty, sword-wielding hero called Isabella Charm.

Why did you want to write it?

The science behind climate change has been around for decades, but it’s hard for us to see in concrete terms. I wanted to transform a bunch of facts into something more relatable and exciting – to invite readers to see the effects of a changing climate from the point of view of kids in an action-packed, adventurous, kid-driven story.

I’ve also been inspired by people like Greta Thunberg, who has created a global climate movement and inventions like fuel made out of seaweed, smart glass and solar powered roads. It’s all very exciting!

I also wanted to ADD HOPE. Grimsdon was released in 2010, when the words "climate change" weren’t often used. The second book, New City, I wrote because I was harassed by kids for more, and the third one, Final Storm, was inspired by the fact that the world is now listening, and that most people believe the science and agree we need to act. And act we are!

What do you think of Grimsdon’s 10 year anniversary?

I thought when I wrote the book it’d be outdated within years, because we’d have acted more decisively, which, sadly, isn’t true. Grimsdon is studied in schools more than ever as a springboard to talking about climate change and sustainability, which is humbling and exciting. I wish in a way it was outdated and the planet was in better shape, but people do care and are acting.

Want to read more about saving the planet?  There are loads of amazing things being done to help protect our environment. And you can join in! Discover ways you can help over at Deborah Abela's website, or pick up your next read from our list of books for kids who love the planet.

Bestselling author Deborah Abela brings us a heroine to love and a great deal of danger to overcome in this thrilling novel set in a post-apocalyptic, flooded world.

A new city offers a new life - but what kind of life will Isabella and her friends find?

In a world of wild weather, is anyone safe?