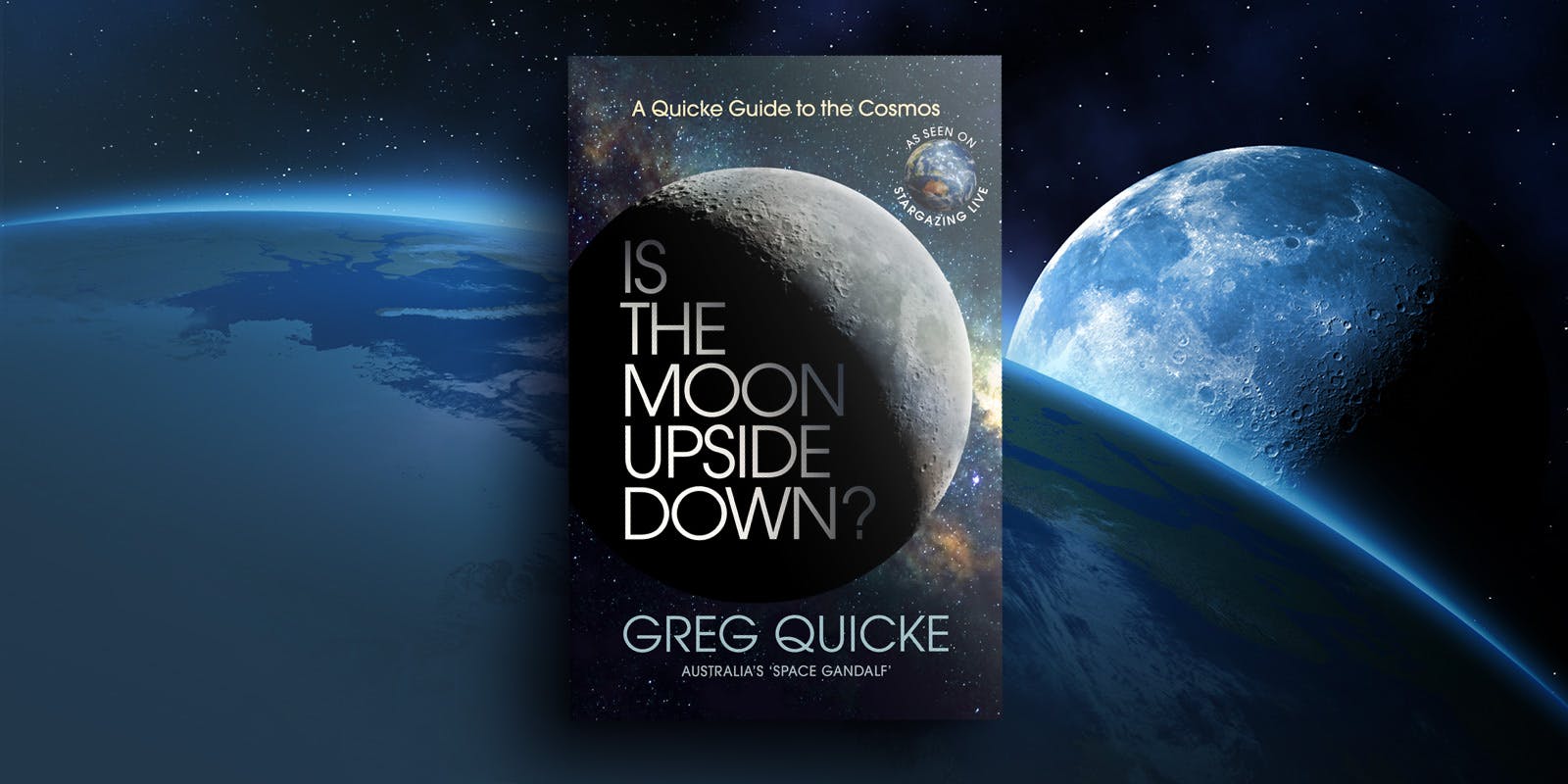 Over the past 25 years, amateur astronomer Greg Quicke has shared his observations of the night sky with more than 100,000 people at his outdoor obser­vatory, Astro Tours, just outside of Broome. More recently he’s widened that audience to millions around the world, thanks to invitations to appear on the BBC series Stargazing Live and the Australian version of the show on ABC TV, where he played the practical astronomer to Professor Brian Cox’s theoretical particle physi­cist. He has now presented his own 10-part series on ABC TV, A Stargazer’s Guide to the Cosmos.

Nowadays, the nickname ‘Space Gandalf’ seems to have stuck. And with his book Is the Moon Upside Down? Quicke ponders Earth's astral dance with the Sun, planets, Moon and the stars in more detail than ever before. ‘While I might share a hairstyle with Tolkien’s great wizard, I’m just an ordinary bloke,’ he writes in the book’s introduction, ‘a self-taught bush mechanic and former pearl diver, a motorbike nut and a mad surfer, who has watched in awe as our planet spins and tumbles through the ever-changing universe.’

In Is the Moon Upside Down? Quicke answers all the questions you never knew you wanted to ask about the night sky. In the edited passage below, he breaks down the magnitude of our solar system, in measurements that are easy to understand, if difficult to fathom.

I found I needed another way of thinking about these numbers in order to comprehend them, and also to share them with the audiences at Astro Tours. I discovered that shrink­ing things helped my little earthling brain get a grip on the enormity of it all and allowed me to get it into the heads of my fellow humanity.

109 mm coconut
On this new scale the Sun is a coconut 109 times bigger than the Earth as a grain of sand.

12 m
Instead of being 150 million km away, our coconut-sized Sun is situated 12 m from our grains of sand – about the length of a school bus. (By the way, in this scenario you are seven million times smaller than that grain of sand in your hand.)

Two more grains of sand
Venus and Mercury also travel around the Sun and are closer to it than we are. They are two more grains of sand, with Venus roughly the same size as Earth, and Mercury only one third the size, or not much bigger than our moon. The grain of sand called Venus is 3.5 m closer to the coconut Sun than we are, or about a quarter of the way down the bus aisle. Mercury is another 4 m closer again, getting nearer to the back of the bus than the front.

Since they are closer to the Sun and its gravitational force, these two inner planets get pulled harder by the Sun than we do. That’s just the way gravity works. To resist this stronger pull, our sand-sized Mercury and Venus have to orbit faster around the Sun to avoid being dragged into it. The extra speed generates greater centrifugal force, which throws them away from the Sun in elliptical orbits that balance the extra gravity at the closer distance.

The outside lane
The further away from the Sun you go, the slower the planets move through space and the longer they take to complete a single orbit.

Mars is another grain of sand that’s half the size of the Earth. It is 6 m away from the sand in the palm of your hand and takes over two years to lap the Sun.

Grapes and peas
Jupiter dwarfs our grains of sand as an 11 mm grape. Earth fits across the face of Jupiter 11 times. Our grape is 60 m away from us and takes 12 years to get around the Sun.

Saturn is a 9 mm wide grape that is nearly twice as far away as Jupiter at 114 m out – put 10 of those school buses end to end. It takes Saturn close to 30 years to do a lap around the Sun.

Uranus and Neptune are both 4 mm peas. Uranus is 230 m away from our grain of sand and takes 84 years to orbit the Sun. Neptune is 370 m out and takes 165 years to do a single lap.

Yes, we are going to keep Pluto. Pluto is nearly half a kilo­metre away from the palm of your hand and is another grain of sand, but only about half the size of our moon. Pluto is a tiny little world that takes 249 years on its big, looping orbit to circle the Sun. Pluto is so far away from our Sun that there would be no daylight, as we know it, on Pluto. The sky would be completely filled with stars all the time. Our Sun would be the brightest one. Take a moment to imagine that view from Pluto.

Is the Moon Upside Down? Greg Quicke