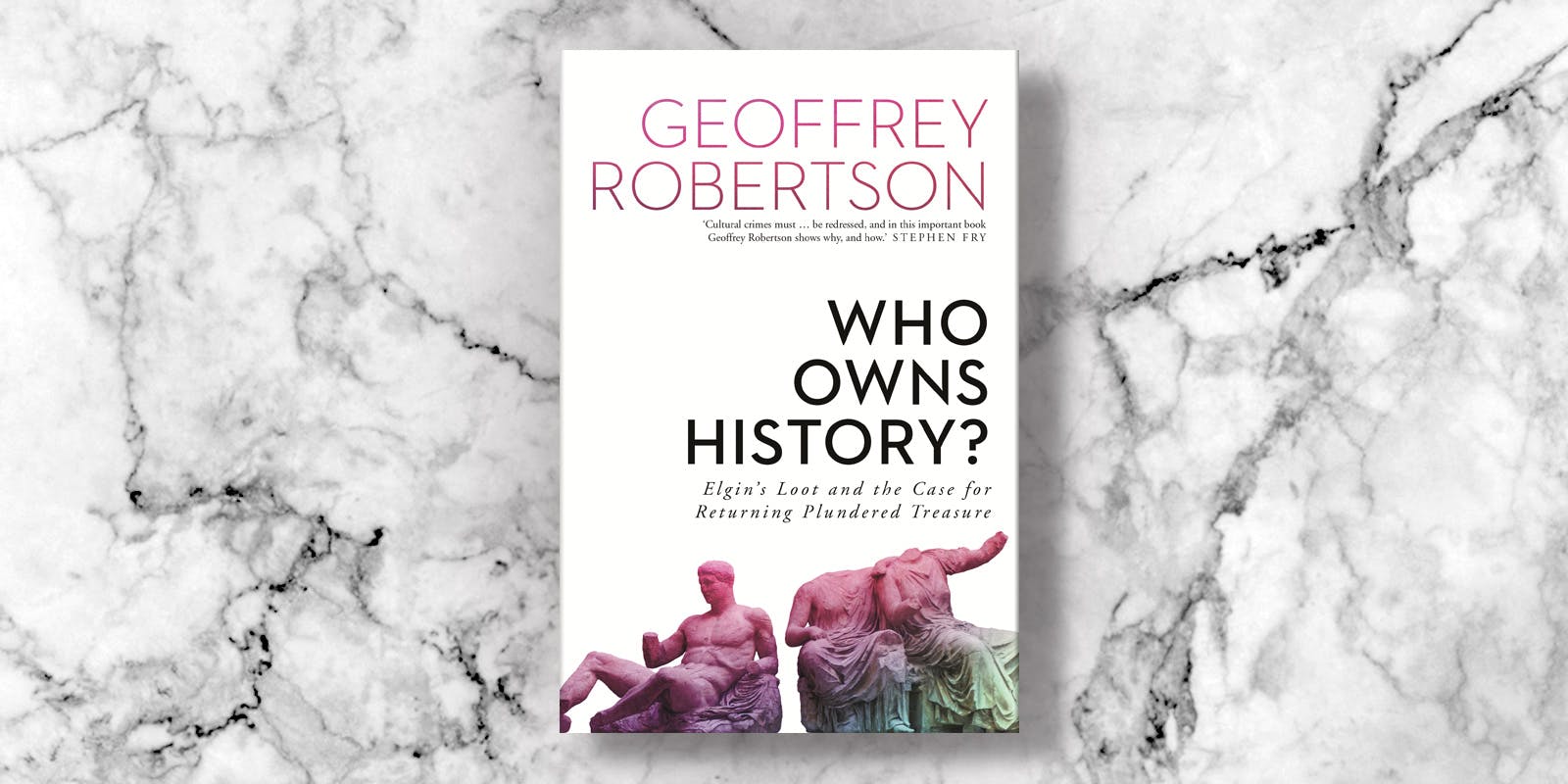 ‘The great contemporary question in the world of art and culture touches upon ethics and politics and, inevitably, law,’ writes Geoffrey Robertson in his book Who Owns History?. ‘It concerns the return of “treasure” taken without consent in earlier times by conquerors or colonial masters or by deception, from subjugated peoples who now regard these antiquities as a key to their history or a vital part of their heritage and want them returned – usually from museums or private collectors in Europe or the US.’

Taking his cue from the great Roman barrister Cicero, Robertson argues that justice requires the return of many looted antiquities on display in the museums of Britain, Europe and America. From the gravestone and remains of Australia’s first expatriate, Yemmerrawanne (currently in the UK), to the hull of Cook’s HMS Endeavour (currently in the US) and the ornate frieze panels of Greece’s Parthenon (currently scattered) – the case for repatriation of national treasures is truly byzantine in complexity and global in scope.

As a demonstration of the historical significance such national antiquities can hold, and the degree to which their plunder remains relatively unchecked, in the passage below Robertson turns his attention to the example of the ‘Elgin’ Marbles.

The Parthenon stands, as it has for almost two thousand and five hundred years, atop the rocky hill of the Acropolis in the centre of Athens. Its marbled pillars radiate, warm and honey-brown in the rising sun for breakfasters on the top floors of the hotels overlooking Syntagma Square; by evening its luminescent columns dominate the city, to remind of the time in the fifth century BC when it served as the backdrop to humankind’s earliest ethical debates. The theatres that sur­vive on this hill saw the plays of Aeschylus and Sophocles, Euripides and Aristophanes; in the marketplace beneath, Socrates posed eternal ques­tions and Pythagoras pondered theorems and Herodotus started writing something called history. They talked of logic and of physics, discussed how justice and freedom might be reconciled with government and the needs of the community, and started to think of themselves as stoics or cynics or epicureans, but above all as democrats: their tyrants had been disposed of at the turn into the fifth century, and they had repelled the barbarians at their gates in the battles of Marathon (490) and Salamis (479). By 448 they had peace and the wealth that came with it. In that year the elected Athenian Assembly was persuaded by its great statesman Pericles to build the Parthenon to serve as a war memorial, as a temple to Athena (goddess of wisdom and protector of the city) and as a museum to showcase its art, in the form of the marble statues of the pediment and the frieze – adornments built into its walls and conceived as part of the building by its architect-in-chief, the sculptor Phidias.

The structure of the Parthenon and the Marbles that were its treas­ure took fifteen years to build, between 448 and 432 BC. It originally comprised fifty-eight Doric columns, supporting a roof with triangular pediments at each end, displaying three-dimensional statues. At one end they represented the birth of Athena from the cleft head of Zeus, in a tableau featuring horses that pulled the rising sun and, exhausted, the setting moon. At the other end, Athena and Poseidon competed to become the sacred patron of the city, the sea god’s offer of saltwater being voted down in favour of an olive tree vouchsafed by the goddess. So far, so mythical, although it is notable that Athena’s victory came by the choice of its citizens. Around the building, and integral to it, were large sculptures (the metopes) interactively representing legendary battles – the Trojan War, and fights between gods and giants, against Amazons and (most dramatically) between guests at a wedding and centaurs attempting to gate-crash the feast. Inside the building, in a special chamber, stood the goddess, 40 feet high and carved by Phidias from gold and ivory. Running around the inside walls of the building was a frieze, 524 feet (160 metres) in length and about 3 feet in height, depicting an annual parade – the Panathenaic procession – of Athenian citizens (some mounted, others carrying wine jugs or musical instru­ments, others shepherding cattle for sacrifice) as they walked up the sacred way to the Parthenon, to present their goddess-statue with a new, finely woven robe (the peplos).

This astonishing and innovatory frieze, like nothing ever found on other Greek temples, was spread over 114 rectangular blocks, an order­ly pageant always moving forward, with musicians and wine bearers, horses and riders and chariots, officials and magistrates, sheep and cows and female votaries and richly costumed women, all painted in colour. There were gods in the background, observant but not intrusive: the focus of this animated frieze, almost a Kodachrome documentary, was on people – the citizens of the first democracy – delighting in the pleasures of a well-ordered society. The characters – 378 citizens and 245 animals – were carefully planned and beautifully carved from marble, painted in vibrant living colours. Even today, whitened and decapitated and stripped of context in the [British Museum’s] Duveen Gallery, the Parthenon Marbles represent the epitome of High Classic art.

That is certainly the view of the European Union, which in 2007 designated the Parthenon as its most important monument, and of UNESCO, which adopted the façade as its emblem and ranked it first in world heritage, giving five reasons for its listing:

So where are the Marbles now, those unique sculptures that survived for 2,000 years until most were ripped off the building by Lord Elgin’s workmen in 1801 and the following two years? Of the ninety-seven sur­viving panels of the frieze, fifty-six were chiselled or sawn off by Elgin’s workmen and shipped, by hired vessels or British warships, to London, where in 1816 they were bought by Parliament and placed in the British Museum. Forty frieze panels remain in Athens, in the New Acropolis Museum 300 metres below the Parthenon, while one was stolen by the French consul and is now in the Louvre. A leg and foot of the goddess Artemis has somehow walked to a museum in Palermo, while the heads of two elderly men absorbed by watching the parade now peruse the statuary in a museum in Vienna. The Vatican Museum has a metope head, as does a museum in Copenhagen, while the Louvre has two heads. (Were the British Museum Marbles to be reunited with those remaining in Greece, these museums could hardly resist returning the fragments.)

Elgin carried off the fifteen best-preserved metopes, making them look two-dimensional by cutting off their carefully sculptured backs for ease of carriage. He despoiled the pediments by seizing twenty of the figures, leaving only eight behind for the Greeks. The statue of Athena had been removed to Constantinople, plundered for its gold and ivory, and is now lost, and the missing panels of the frieze had been destroyed, along with the roof and some columns of the buildings, in a Venetian bombardment in the seventeenth century.

Elgin’s loot comprises half of the extant artwork (his agents chose the best that had survived by 1801). The first claim to have it back was made by the newly independent Greek government in 1833 and made formally by the King in 1836. The British Museum tried to fob them off by sending moulds. This was perceived (and may have been intended) as an insult, although these moulds (a little dog-eared and anachronisti­cally white) may still be seen in the New Acropolis Museum, deputising until the originals are prised from the Duveen Gallery. The demand for return of the originals has been made with greater force since the opening of the museum in Athens in 2009, where they would be safe from petrol fumes and fog and would look out on the Acropolis.

In order to evaluate the Greek claim, it is necessary to describe the significance of the Parthenon in the history of Greece and of intellec­tual and artistic endeavour in the mid-fifth century BC. The building was planned and constructed as a single entity, its artworks and sculptures a vital part of the edifice as a whole. Since re-unification means putting the Marbles back together in a modern Greek museum which provides the best place to see and to study them, it will be impor­tant to our understanding and appreciation of the early development of human civilisation.