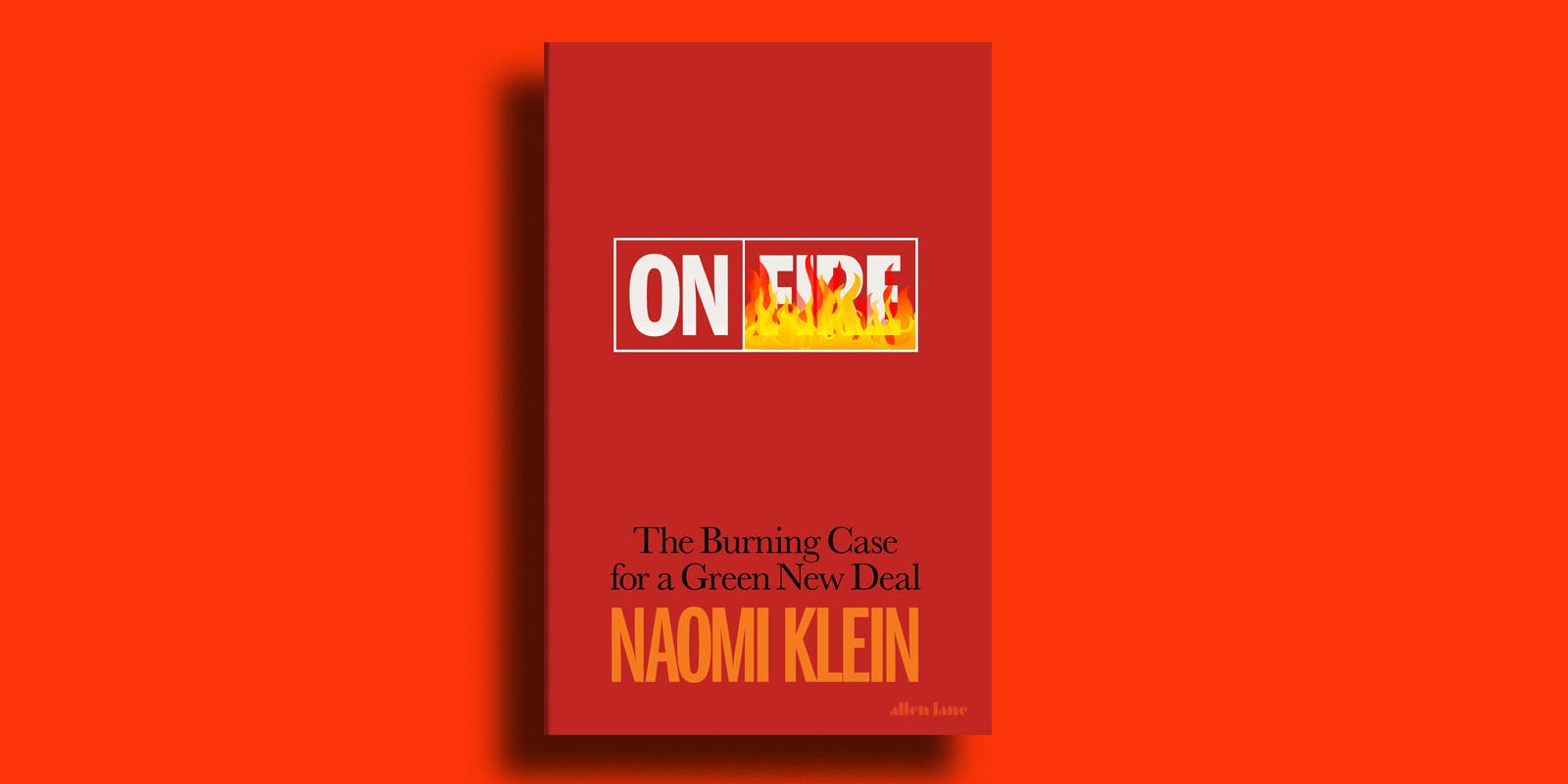 In her 2015 book This Changes Everything: Capitalism Vs the Climate, award-winning journalist and environmental campaigner Naomi Klein tackled the most profound threat humanity has ever faced: the war our economic model is waging on the planet. Sadly, although the urgency for climate action amplifies with every passing minute, as we’re in the midst of Earth’s first human-induced mass extinction event, global powerbrokers remain reluctant to act.

In her latest call to arms, On Fire, Klein demonstrates how the fight to save the planet is tantamount to a fight for our own existence. As she outlines in the book, a global transition from the status quo to something radically better for people and the planet will not be easy. It will take imagination, compassion, open-mindedness and collaboration – attributes our younger generations have in spades. In the passage below she celebrates the actions of the many hundreds of thousands of school students who marched for the climate in March 2019.

On a Friday in mid-march 2019, they streamed out of schools in little rivulets, burbling with excitement and defiance at an illicit act of truancy. The little streams emptied onto grand avenues and boulevards, where they combined with other flows of chanting and chatting children and teens, dressed in leopard leggings and crisp uniforms and everything in between.

Cardboard signs bobbed above the surf of humanity: THERE IS NO PLANET B! DON’T BURN OUR FUTURE. THE HOUSE IS ON FIRE!

Some placards were more intricate. In New York City, a girl held up a lush painting of delicate bumble bees, flowers, and jungle animals. From a distance, it looked like a school project on biodiversity; up close, it was a lament for the sixth mass extinction: 45% OF INSECTS LOST TO CLIMATE CHANGE. 60% OF ANIMALS HAVE DISAPPEARED IN THE LAST 50 YEARS. At the center she had painted an hourglass rapidly running out of sand.

For the young people who participated in the first ever global School Strike for Climate, learning has become a radicalizing act. In early readers, textbooks, and big-budget documentary films, they learned of the existence of ancient glaciers, dazzling coral reefs, and exotic mammals that make up our planet’s many marvels. And then, almost simultaneously – from teachers, older siblings, or sequels to those same films – they discovered that much of this wonder has already disappeared, and much of the rest of it will be on the extinction block before they hit their thirties.

But it wasn’t only learning about climate change that moved these young people to march out of class en masse. For a great many of them, it was also living it. Outside the legislature building in Cape Town, South Africa, hundreds of young strikers chanted at their elected leaders to stop approving new fossil fuel projects. It was just one year ago that this city of four million people was in the clutches of such severe drought that three-quarters of the population faced the prospect of turning on the tap and having nothing come out at all. CAPE TOWN IS APPROACHING DROUGHT ‘DAY ZERO,’ read a typical headline. Climate change, for these kids, was not something to read about in books or to fear off in the distance. It was as present and urgent as thirst itself.

The same was true at the climate strike on the Pacific island nation of Vanuatu, where residents live in fear of further coastal erosion. Their Pacific neighbor, the Solomon Islands, has already lost five small islands to rising water, with six more at severe risk of disappearing forever.

‘Raise your voice, not the sea level!’ the students chanted.

In New York City, ten thousand kids from dozens of schools found one another in Columbus Circle and proceeded to march to Trump Tower, chanting ‘Money won’t matter when we’re dead!’ The older teens in the crowd had vivid memories of when Super-storm Sandy slammed into their coastal city in 2012. ‘My house got flooded and I was so confused,’ recalled Sandra Rogers. ‘And it really made me look into it because you don’t learn these things in school.’

New York City’s huge Puerto Rican community was also out in force on that unseasonably warm day. Some kids arrived draped in the island’s flag, a reminder of the relatives and friends still suffering in the aftermath of Hurricane Maria, the 2017 storm that knocked out electricity and water in large parts of the territory for the better part of a year, a total infrastructure breakdown that took the lives of roughly three thousand people.

The mood was fierce, too, in San Francisco, when more than a thousand student strikers shared stories of living with chronic asthma because of polluting industries in their neighborhoods – and then getting a whole lot sicker when wildfire smoke choked the Bay Area just a few months before the strike. The testimonies were similar at walk-outs all over the Pacific Northwest, where smoke from record-breaking fires had blotted out the sun for two summers running. Across the northern border in Vancouver, young people had recently succeeded in pressuring their city council to declare a ‘climate emergency.’

Seven thousand miles away, in Delhi, student strikers braved the ever-present air pollution (often the worst in the world) to shout through white medical masks, ‘You sold our future, just for profit!’ In interviews, some spoke of the devastating floods in Kerala that killed more than four hundred people in 2018.

Australia’s coal-addled resource minister declared that ‘The best thing you’ll learn about going to a protest is how to join the dole queue.’ Undeterred, 150,000 young people poured into plazas in Sydney, Melbourne, Brisbane, Adelaide, and other cities.

This generation of Australians has decided it simply cannot pretend that everything is normal. Not when, at the start of 2019, the South Australian city of Port Augusta had reached an oven-worthy 121°F (49.5°C). Not when half the Great Barrier Reef, the world’s largest natural structure made up of living creatures, had turned into a rotting underwater mass grave. Not when, in the weeks leading up to the strike itself, they had seen bushfires combine into a massive blaze in the state of Victoria, forcing thousands to flee their homes, while in Tasmania, wildfires destroyed old-growth rain forests that are unlike any ecosystem in the world. Not when, in January 2019, a combination of extreme temperature swings and poor water management led the entire country to wake up to apocalyptic images of the Darling River clogged with the floating carcasses of one million dead fish.

‘You have failed us all so terribly,’ said fifteen-year-old strike organizer Nosrat Fareha, addressing the political class as a whole. ‘We deserve better. Young people can’t even vote but will have to live with the consequences of your inaction.’

There was no student strike in Mozambique; on March 15, the day of the global walkouts, the whole country was bracing for the impact of Cyclone Idai, one of the worst storms in African history, which drove people to take refuge at the tops of trees as the waters rose and would eventually kill more than one thousand people. And then, just six weeks later, while it was still clearing the rubble, Mozambique would be hit by Cyclone Kenneth, yet another record-breaking storm.

Wherever in the world they live, this generation has something in common: they are the first for whom climate disruption on a planetary scale is not a future threat, but a lived reality. And not in a few unlucky hot spots, but on every single continent, with pretty much everything unraveling significantly faster than most scientific models had predicted.

Oceans are warming 40 percent faster than the United Nations predicted just five years ago. And a sweeping study on the state of the Arctic published in April 2019 in Environmental Research Letters, led by renowned glaciologist Jason Box, found that ice in various forms is melting so rapidly that the ‘Arctic biophysical system is now clearly trending away from its 20th Century state and into an unprecedented state, with implications not only within but also beyond the Arctic.’ In May 2019, the United Nations’ Intergovernmental Science-Policy Platform on Biodiversity and Ecosystem Services published a report about the startling loss of wildlife around the world, warning that a million species of animals and plants are at risk of extinction. ‘The health of ecosystems on which we and all other species depend is deteriorating more rapidly than ever,’ said the Platform’s Chair, Robert Watson. ‘We are eroding the very foundations of economies, livelihoods, food security, health and quality of life worldwide. We have lost time. We must act now.’