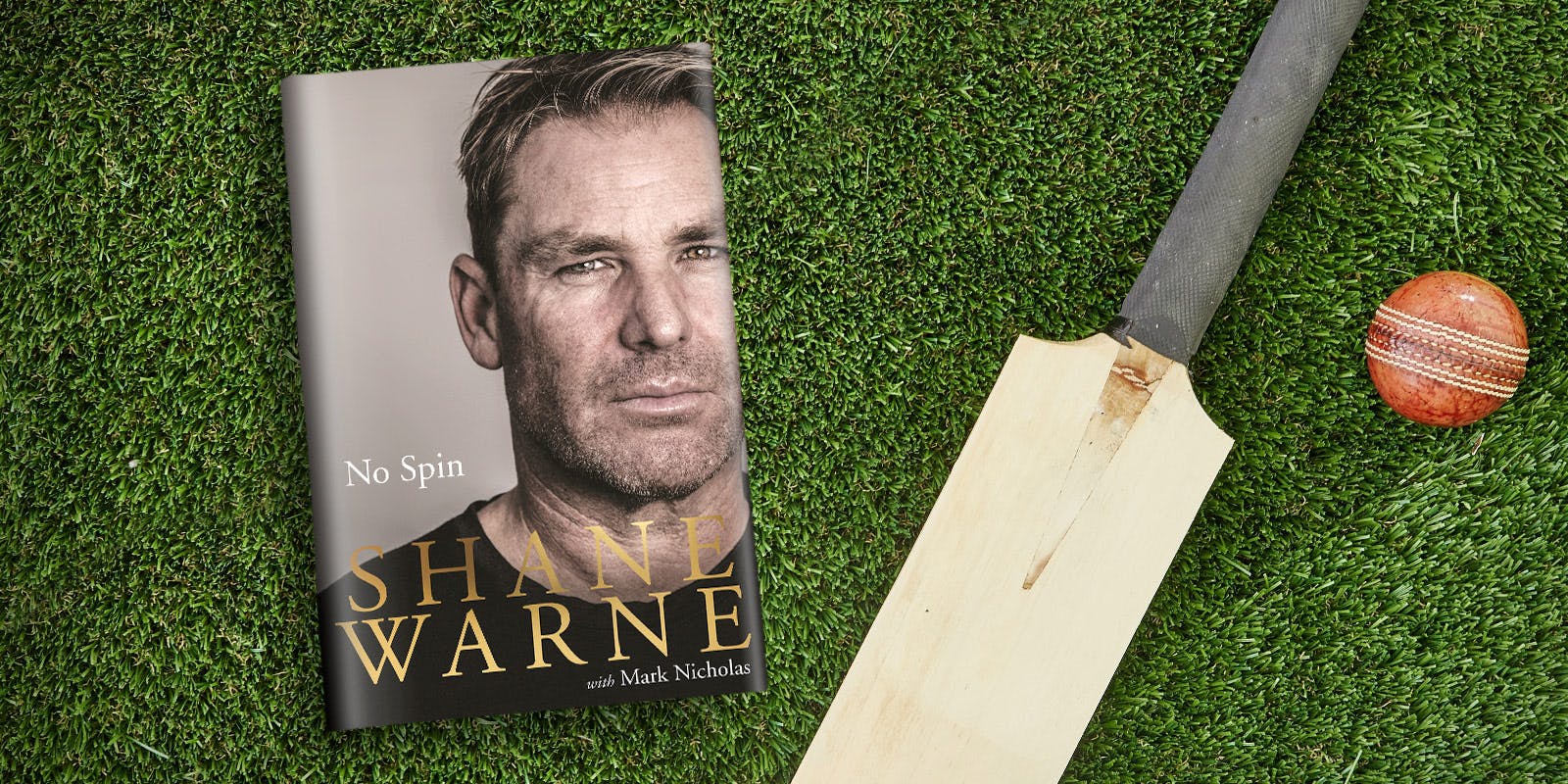 After millions of words being written about the man, in No Spin Shane Warne finally tells his own story in his own words. With trademark matter-of-factness and humour, he walks readers through the remarkable life of an ordinary lad from suburban Melbourne. Among the legendary cricketing high points, the crushing defeats, numerous controversies and countless cigarettes, he shares many surprising anecdotes that reveal multiple aspects of himself. Pulled from the pages of No Spin, here are five lesser-known facts about the man remembered as the ‘Sultan of Spin’.

In the early part of 1989 I opened a letter from St Kilda Football Club that shattered my dreams. The long and short of it was ‘Your services are no longer required’.

Dad says that my final ‘trial’ went against me. I’d been playing for the St Kilda Under 19s, doing okay, and I’d been on stand-by for the next step up – to the senior division – for six weeks in a row. Then, the day they called, I’d been sick in bed all week, really weak, and I hadn’t been to training. Dad remembers that I’d climbed out of bed to ring Gary Colling, the coach of the Under 19s, to pull out of the match, but Gary beat me to it and said I was needed to play in the senior reserves match the next day. On the day I was offered my big chance, I was as sick as a dog. Strange how life turns out – sliding doors and all that. Anyway, instead of saying I was too crook to play, I said, ‘Wow, yeah, alright, I’ll be there.’

It was a disaster. Playing against Carlton, I was up against Milham Hanna, one of the fastest men in the league – a couple of years later, he’d be selected in the All-Australian team – and I had nothing. I was white as a sheet. The people who matter just figured I wasn’t up to it and dropped me back down to the Under 19s.

But although Dad says I was ill and should never have played in that match, the truth is that I wasn’t good enough – not a mile off, but in the end not good enough. That’s hard to take. It went deep, like my soul had been ripped out. I was in love with AFL football but the game was not in love with me.

Imagine it for a moment. The kid with the football dream, the bogan at heart, told he was going to play cricket for Australia. Not much floors me, but that call did. I felt like I was out of my league. Talk about daunting. I didn’t know many of my team-mates – I mean, I’d been copying most of them in the backyard the week before. You know, doing impressions and commentating their performances. Now I was shaking their hand and changing alongside them. I felt awkward, disorientated, exposed.

Ravi Shastri smashed me all over the park; it was sort of embar­rassing. I didn’t bowl long hops or full tosses, not many anyway. I bowled mainly pretty good balls, but got hammered everywhere. At that stage I didn’t really have a plan – I just bowled and waited for the batsman to make a mistake…

I dropped Ravi – a caught and bowled chance when he had 66 – which might have made a huge difference. Instead, he got a double hundred. It went from bad to worse, as Sachin got 140-odd as well. He was about 12 years old, looked eight and smashed me.

My figures were 1/150. I felt stupid and wanted a hole to disap­pear into, but that’s the thing about Test cricket – there is no hole. You’re stuck with it for up to five days and every bastard is watching and has something to say.

Old Trafford in England in 1993 changed everything. I bowled the best ball that anyone had ever seen – or so they told me. ‘The Ball of the Century’, they said, as if it was an all-time classic song, y’know, ‘Honky Tonk Women’ or ‘Bohemian Rhapsody’. There were photographers and newsos everywhere, following me close – too close – and I was thinking, ‘Hey, whoa, what’s going on?’ I had no idea about this stuff and it was massive. I was 23 years old and wherever I went it suddenly felt like there was a kid with zinc cream on his nose, trying to bowl leg-spin. A cult had appeared from nothing in the UK and I was it.

No-one teaches you this bit. There is no school – you just have to trust your gut, be yourself and get a bit lucky. There are plenty of sharks out there, in it for themselves. The trick I quickly learnt was to surround myself with good people. I didn’t see myself as this new global superstar who’d bowled a miracle delivery that had everyone out of their seats, but the families and kids in the streets – or at hotels, restaurants, bars and, of course, at cricket grounds – well, they did. I didn’t want all the other stuff and I sure didn’t see it coming. It’s been an ongoing problem of mine. I don’t see the big-shot sports­man, I see the guy from Bayside, cruising with his mates, happy with a pizza and a beer.

I did the catwalk with Helena Christensen and Claudia Schiffer at a Just Jeans show in Melbourne. I walked out with Helena and said, ‘How cool is this!’ and she went ‘Ssshhhh!’ Oh, okay. I kept going to the end of the catwalk, spun round with my best ‘blue steel’ look in an effort not to giggle, and headed back to where we’d come from and through to backstage.

The next thing I knew, she had all her clothes off, tits out. I thought, ‘Oh shit.’ Then she had the next outfit on before I’d barely had time to blink, never mind have a look. At which point she turned to me and said, ’Listen, you do not talk when we walk out there, you just walk, stare straight ahead at whoever or whatever you want, get to the end, turn around, walk back and do it all over again. Just concentrate on what you’re doing.’ Oh, right.

That was about it with her and I can’t say I had much of a chat with Claudia either. Helena was dating Michael Hutchence of INXS at the time. I met Michael in Perth after one of their concerts. We had a beer backstage and I told him the story. He had a laugh about it and then called Helena over. I didn’t know she was there! Anyway, she had a giggle about it too and said, ‘Sorry, but I do that stuff every day – must have got out of bed the wrong side that morning!’ I’ve got a big picture in my house of Helena and me walking down the catwalk.

Richie Benaud taught me something interesting that I’ve passed on to a lot of the young kids who tell me they struggle to take wickets regularly. ‘Hey, Warney, I bowled 15 overs the other day and only got one wicket,’ they say. I ask them if they think I was any good and they say, ‘Yeah, you’re the best!’ Nice. Okay, how many balls do you reckon it took me to get a wicket? ‘Oh I don’t know, you probably got one every two or three overs.’ No, I got one every nine to 10 overs – every 57.4 balls to be exact. Murali and all the other guys are around the same, nine to 10 overs to get a wicket. The message is that patience is very, very important to spinners.

Richie had given me a list of the strike rates of the top five spinners in Australia – surprisingly high – then he emphasised how impor­tant patience was. So I say to the kids, ‘Look at how many deliveries it takes for a spinner to take a wicket. Patience, accuracy, persever­ance and guts matter more than anything else, except spinning the ball. Spinning the ball is number one.’