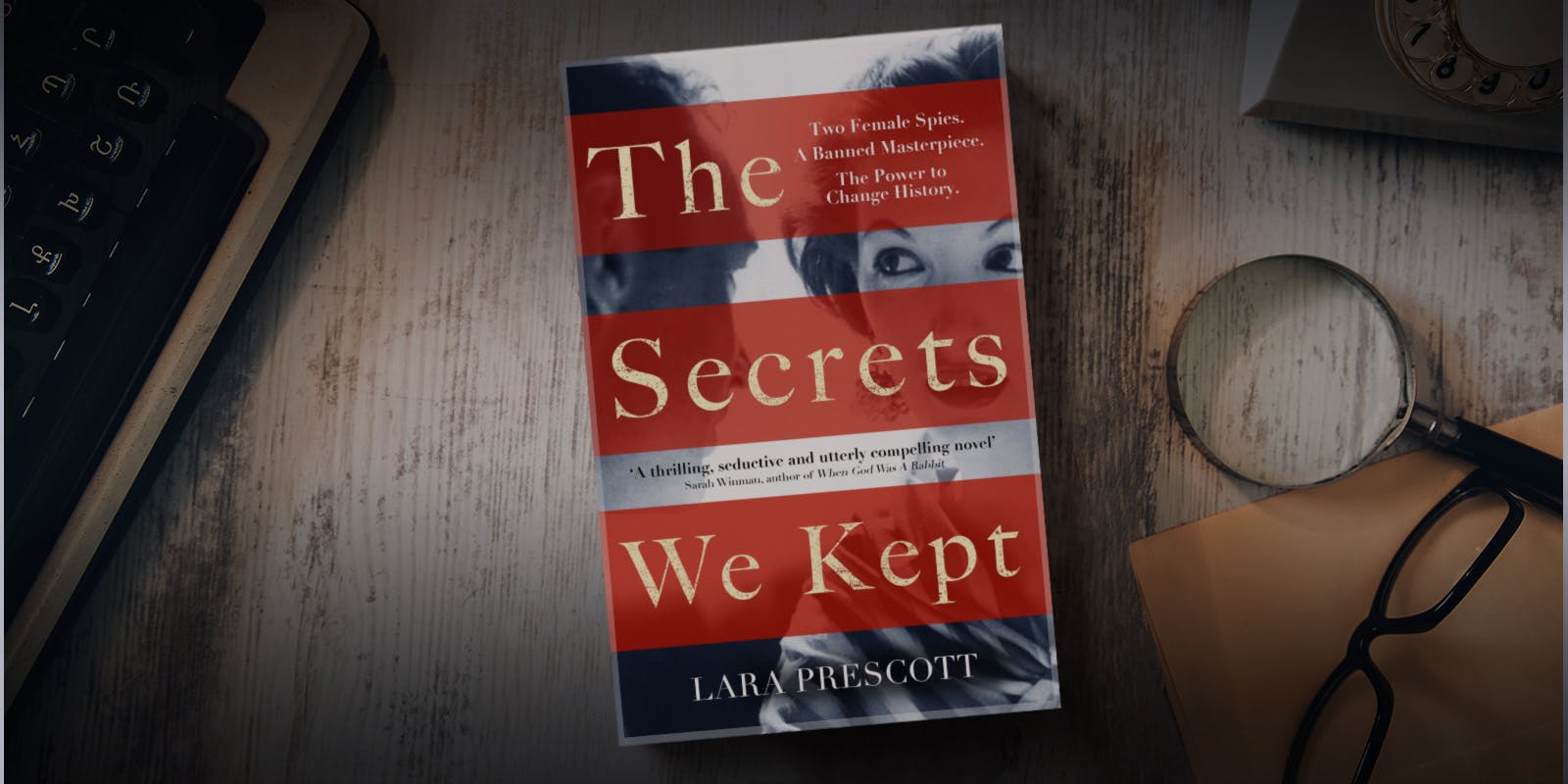 Is it fair to say this book started with your name?
Yes! I have my parents to thank for naming me Lara, after Boris Pasternak’s heroine. My mother had loved David Lean's masterful film adaptation of Doctor Zhivago, and, as a child, I'd wind up her musical jewelry box again and again just to hear it play 'Lara's Theme'. I, too, loved the movie, but it wasn’t until I actually read the novel that I felt such a strong connection with the material. It was as if the old master was reaching out to me across time and space – a candle in a window on a winter night.

Where did you first come across the story of Doctor Zhivago’s storied publication? Also, can you tell us a little about its history?
Again, I thank my parents for this! In 2014, my father sent me a Washington Post article titled 'During Cold War, CIA used Doctor Zhivago as a tool to undermine Soviet Union.' I devoured the incredible true story behind the novel’s publication – a story involving clandestine propaganda missions, vying governments, books used as weapons, personal intrigue, and heartache. From that point on, I wanted to find out everything I could about the story behind the story. What I discovered was that during the Cold War, Eastern and Western governments weaponized literature to change the hearts and minds of people. Zhivago was one such book. The novel’s plot revolves around a love story between Lara and Yuri, but its depictions of the October Revolution and the Russian Civil War, as well as its themes emphasising the importance of individual freedom, resulted in the book being banned by the State. Italy was actually the first country to publish Doctor Zhivago. Pasternak covertly gave his manuscript to Sergio D'Angelo – an Italian employee of Radio Moscow with connections to publisher Giangiacomo Feltrinelli. D’Angelo hand-delivered the novel to Feltrinelli in West Berlin. Once the Soviets discovered the Italians had the novel, they pressured them to return it immediately. But Feltrinelli stood firm, and soon Zhivago became an international bestseller. After the book saw tremendous success in the West, the CIA obtained the banned manuscript, clandestinely printed it, and smuggled it back into the USSR. Shortly after, Pasternak was awarded the Nobel Prize in Literature but was forced to turn it down under pressure from the State. It wasn’t until 1988 that Zhivago was published in its homeland and able to be read freely.

What kind of research informs this novel?
I subscribe to the thought: 'Read a hundred books, write one.' And I did exactly that, pouring over book after book about the Cold War, propaganda, CIA history, the lavender scare, Russian history, Boris Pasternak, and more. I received great pleasure from my research, which kept me invested in (read: obsessed with) the story. In the Western thread, most of the characters are fictional. But peppered throughout are historically accurate details, including some real names, as well as direct quotes and descriptions pertaining to the Zhivago mission. For this thread, Peter Finn and Petra Couvée’s The Zhivago Affair proved an indispensable asset. In 2014, thanks to Finn and Couvée’s petitioning, the CIA released ninety-nine memos pertaining to its secret Zhivago mission. And it was seeing the declassified documents – with their blacked-out and redacted names and details – that first inspired me to want to fill in the blanks with fiction. The Eastern thread contains many direct descriptions and quotes, including excerpts of conversations, as documented in first-hand accounts. Olga Ivinskaya’s autobiography, A Captive of Time, and Sergio D’Angelo’s memoir, The Pasternak Affair, shed light on what it was like to have lived through many of the events described in The Secrets We Kept. Additionally, while writing the novel, I had the opportunity to travel to Russia, DC, London and Paris for research, as well as chat with experts on the subject matter, including the author of The Zhivago Affair, Peter Finn, Boris Pasternak’s niece Ann Pasternak Slater, historian H W Brands and Ann Todd, an authority on the first female spies.

We have heard you collected some pretty cool objects while writing this book. True?
Very true. The many historical artifacts I procured during the writing of The Secrets We Kept were also of great value, including Feltrinelli's first edition of Doctor Zhivago in Italian; a miniature copy of Zhivago produced by the CIA; maps from Expo 58; original articles on Pasternak and Zhivago from the late 1950s; and items related to early female spies. I believe there's a power in objects and felt a certain magic when holding these items. I surrounded my writing desk with them, hoping some of that magic would rub off.

You’ve said that Olga Ivinskaya, Pasternak's real-life mistress and inspiration for his character Lara, became your muse while writing this novel. What about her do you find most inspiring and compelling?
While most eyes gravitate toward the famous man in the spotlight, I’ve always been most intrigued by the woman behind it. The Secrets We Kept begins in the West, opening on the CIA’s typing pool; and indeed that was the first voice that came to me when I began the project. But when I discovered A Captive of Time – the autobiography by Pasternak’s mistress and muse, Olga Ivinskaya – I realised I was missing half the story. Ivinskaya was sent to the Gulag (twice) for her involvement with Pasternak, and seeing this experience through her eyes – what it was like to stand by the love of her life no matter the cost, to suffer at the hands of the State – I knew there had to be an Eastern thread in the novel, which had to be anchored by her story. Over the years, Olga’s story and reputation have been suppressed by those wanting to protect Pasternak’s legacy. Above all else, I wanted to give her a voice once more.

Are Sally and Irina, your secretaries-turned-spies, also inspired by real-life people?
No, but they are very much inspired by early female spies. Elizabeth 'Betty' Peet McIntosh’s book Sisterhood of Spies first exposed me to a world of real-life heroines, including Virginia Hall, Julia Child (yes, that Julia Child!), and the author herself. These women got their start in the OSS (the precursor to the CIA) during WWII, and, after the war, some transitioned to the CIA, just as Sally does in the novel. Today, we may have a woman as the head of the CIA but, back then, most women – even those who had served their country so courageously – were relegated to secretary or clerk positions.

This novel is really about unsung heroines – Sally, Irina, all the other women in the CIA typing pool, and, of course, Olga. Did you begin TSWK with the purpose of bringing to life the women who have often been overshadowed by men and putting them center stage?
Most definitely. As mentioned above, at the forefront of my mind while writing The Secrets We Kept was telling the story of Zhivago’s writing and the USSR’s persecution of Pasternak through the eyes of Olga, without whom the book may never have been written. Also at the forefront was telling the story of all those women – many lost to history – who served the United States during WWII and the CIA’s early days.

You used to live in Washington DC and work on political campaigns. Did that work help shape this novel?
Absolutely. I joke with friends that I had to move away from DC to be able to write about it! As a former political campaigner, I’ve always been interested in how words can change minds and influence people. It was my job to craft messages that would move the needle. Today, tweets, bots, and Facebook posts may be propagandists' weapons of choice, but 60 years ago, the Soviets and Americans used books. The tactics may have changed, but the motives remain the same.

You travelled to Russia and visited Pasternak’s dacha in Peredelkino. What was that experience like?
I had the fortunate opportunity to travel to Russia while writing the first draft of The Secrets We Kept. It’s one thing to read about the history, but it is another to explore the same Moscow streets, walk the same village paths, see what Boris and Olga saw 60 years ago. It was truly a magical moment getting off the train in Peredelkino and taking the same route Pasternak had walked to his dacha on the hill so many times. Visiting his gravesite and its modest tombstone was an incredibly moving experience that I’ll never forget.

2020 will mark the 60th anniversary of Pasternak’s death. All these years later, why do you think Zhivago has continued to hold such power over readers?
Each time I read Doctor Zhivago, I take something different away from it. As a young adult, I was most interested in the love story. Later, I was struck by the sheer brilliance and beauty of Pasternak’s sentences. On my most recent readings, what struck me the most were the ways in which Pasternak conveys the importance of free thought. Through the life of Yuri Zhivago, Pasternak demonstrates that the yearning for freedom remains an indestructible force – in spite of political systems that seek to repress it. To me, Zhivago is more about life and love than politics. It's about individuals who think and laugh and love for themselves, no matter the cost. That said, reading the book today feels just as relevant as it was when first published in 1957.

The Secrets We Kept is about the power of books – in this case how one book impacted history. Do you think books can still do that? What are the books that have been the most important to you?
I know this much to be true: books have certainly changed my own life. Books like Edward P Jones’s The Known World, Toni Morrison’s The Bluest Eye, J M Coetzee’s Disgrace, and Patricia Highsmith’s The Price of Salt all had a hand in changing the way I view the world. To me, there is no greater way to build empathy than storytelling. Books allow us to experience others’ lives, visit other time periods, and walk the streets of places we’ve never been. In a time where there is so much talk of building walls and vitriolic rhetoric that emphasises all that makes us different, it is almost a revolutionary act to imagine all that makes us similar.

The Secrets We Kept Lara Prescott

A wonderful, revelatory, unforgettable read about passion, friendship, hidden heroes, and the power of the written word to change the world.

Two female spies, a banned masterpiece, a book that changed history... The Secrets We Kept is perfect for book club.