My face is pressed into the ground. The dirt tastes like blood. Or maybe my blood tastes like dirt. I spit it out.

‘Get up, Sticks! Tachiagare! Get up!’

Maki’s yelling at me and yanking on my t-shirt. He’s right beside me, but he sounds real far away.

Pushing up, I peel my face away from the ground. My lip throbs. I wipe my hand across my mouth. Yep. Blood and dirt.

Rolling over to face Bryce, I scan his expression. Blank as usual. Not at all fazed that he just decked me. Not sure what else I was expecting.

Jed’s between us, sort of squatting – right hand raised above his head, Lefty out in front and his weight shifted onto his back foot. Most people laugh it off when Jed strikes his ‘karate expert/I’m ready to take you down’ pose, but Bryce has known Jed for

long enough to know he’s dead serious. Jed may only be eleven, but he’s already got his brown belt and could kick Bryce’s butt any day.

‘Move it, Jed,’ Bryce demands, but keeps his distance.

Jed’s so Batman. Christian Bale Batman. Cool, calm and tough as hell. I’m the total opposite – sprawled on the ground like a squashed insect.

Maki yanks me to my feet.

I sway a little, kinda woozy. A punch to the gob will do that to you. But it’s not my first and I know how to shake it off.

Tommy stands a couple of metres behind us, ready to run. That’s how we always do it. When we’re running away from someone it’s always Tommy first, ’cos he thinks real quick and knows the best way to go. Then me and Maki. Then Jed goes last, ’cos if whoever’s chasing us catches up, he can break their legs or whatever awesome karate thing he wants to do.

Bryce towers over Jed, still ready to attack. But it’s me he stares down.

The Tormenter’s shoulders expand and his chest stretches as he looms over me. Clenching his fists, the veins in his neck throb and red horns tear through the skin of his forehead. I stare into his yellow eyes, searching for something human, but find nothing.

I try to shake the image out of my head. I also try to breathe normally. When Bryce is around, all the air gets stuck in my chest. It’s like I’m trying to breathe through a wet towel.

Gathering up any scraps of courage I can find, I stare back at him. I know I’m not real convincing. As if the Tormenter would be scared of Captain Stick Insect. Bryce points his finger at me.

‘I’ll get you, Sticks. When your little bodyguards ain’t around. I know where you live, remember?’ He laughs at his own joke.

‘Dekiteru,’ Maki answers. Usually I hate it when they speak Japanese to each other, because I barely understand a word. But neither does Bryce, so it’s actually perfect in these situations. I wish I spoke another language.

Okay, my Japanese sucks but I know what that means. It means run!

Jed bounces off his back leg and kicks Bryce square in the you-know-what. The rest of us bolt.

I follow Tommy’s steps exactly as he springs between the dips and rabbit holes. Without him, I’d have a broken ankle in the first ten metres. I’ve seen people on TV doing this thing called parkour. I reckon Tommy would be sick at it. He knows exactly where to go even when he’s bolting at full speed. But to be fair, there’s not much Tommy doesn’t know.

Wiki’s feet move so fast they become a blur. A lightning bolt streaks from behind him as he flies through the field, leaving a trail of burnt grass in his wake.

I don’t bother looking over my shoulder. I know Maki’s right behind me, and Jed’s right behind him. And I know that Bryce is too lazy to chase us for more than five minutes. Plus, like he said, he knows where I live. He’ll get me eventually.

Tommy ducks under a fence like a rabbit, without slowing down. Me getting through the fence is much more like an unco sloth crawling through a wire maze. By the time I drag myself out the other side, Tommy is disappearing down the bank ahead. I stop for a second. He’s too fast for me, but I bet we’re heading for the pipes. He’ll wait for me there.

‘Hayaku!’ Maki yells as he slips through the fence and overtakes me. I’m pretty sure I should know what that word means, but, like most things, it just slips through my swiss-cheese brain.

‘It means hurry up!’ Jed says, grabbing my arm and dragging me onto my feet.

I turn to check behind us.

Jed grins wickedly and we slide down the bank to the pipes.

Crawling inside, we settle in on the cold concrete. Tommy and me sit opposite each other, pressing the soles of our shoes together to stop us from slipping down into the middle. Maki and Jed do the same. We stay still, listening to our breathing slow. The sound of water trickling down the side of the pipes makes me wanna pee. I’m not a big fan of peeing in the wild. The guys reckon I’m fussy, but I like a toilet –

with walls. I stop listening to the running water and try to think of something else.

The four of us – Wiki, SkyDrop, HiSpeed and Filter – the Screen Savers. Facing off against the baddies. Saving the world. Not needing to pee. Not even a little.

‘Thanks, Jed. Again!’ I say, reaching up to touch my swollen lip. It’s not that bad. Mum and Dad probably won’t even notice.

We all grin. That’s us – Jed, Maki, Tommy and me – the Lockett Squad. It’s a dorky name that old Mr Kennedy gave us but it’s kinda stuck.

See, the four of us live on Lockett Street. And Mr K can’t be bothered learning all our names so he just started calling us the ‘Lockett Street Kids’, which morphed into ‘Lockett Squad’. He also says if we don’t straighten out, eventually we’ll be ‘lockett up’. It’s a bad old-man pun, but the name has stuck.

‘You gotta tell someone, Sticks. Dob him in,’ Tommy says.

I just shrug at him, like I always do. Just because

Tommy knows everything doesn’t mean I have to listen to him. I try to clean the blood off my lip with the end of my sleeve.

‘What will your mum and dad say?’ asks Maki.

‘Same old,’ I say. ‘Big brothers can be tough. He’s going through a stage. Stay away from him. Don’t antagonise him.’

‘Antagonise?’ Maki’s eyebrows meet in the middle as he searches for the word in that two-language brain of his. I can barely fit one language in mine. I really don’t get how he can squeeze two in there.

‘Ah, souka! So what do you do to antagonise him?’ asks Maki.

‘I dunno. Exist?’ The guys crack up and I join in. Our laughter bounces off the pipes and I quickly forget about my lip.

The echoing dies down and Jed locks eyes with me. ‘Seriously, though, you should tell someone, Sticks. Report him. Like they said at school, you know, if someone is hurting you.’

I scoff at him and look away. ‘They mean like a bad adult or a school bully. They’re not talking about big brothers. Big brothers are supposed to beat up on you. It’s part of the gig. You’d get it if you had one.’

‘I am a big brother,’ says Maki, ‘and I would never hit the twins.’

‘Technically, you’re a step big brother,’ I point out.

Maki shrugs. ‘I still would not hit them.’

‘Yeah,’ says Jed. ‘And my sensei says you can only hit in self-defence.’

We all crack up again. I don’t really care about Bryce. I’m used to him. I’ve put up with him for eleven years already, and he says as soon as he turns eighteen he’s ‘out of this hole’ – so that means I only have to survive another two years. I can do that. Plus, with this lot around, nothing can touch me.

Tommy looks at his watch. ‘Okay, it’s almost four. Anyone gotta get home?’

We shake our heads. Our parents all work and Tommy’s grandma sleeps a lot, so as long as we get home at some point, no one will send the cops after us.

‘Awesome! Who wants to head to HQ? Bit of Screen Savers and a swim?’

Jed laughs at me. ‘You’re not worried about getting smashed by Bryce, but you’re scared of that slug of a security guard?’

‘I’m not scared of him, I just don’t wanna get busted.’

‘Daijobu. Do not worry so much,’ says Maki. ‘He never stays until five. I do not think Everitt has ever done a full day of work.’

Who can say no to that grin?

‘Okay,’ I say, leaping to my feet. ‘But last one there has to do twenty push-ups.’

‘No fair,’ complains Jed, waving Lefty at me. Lefty is the name Jed gave to his amputated arm, which ends just past his elbow. Mum says I should call it his ‘residual limb’, but it’s Jed’s Lefty so I reckon he can call it whatever he likes.

Jed shakes his head. ‘Nah, I mean last one there has to do twenty one-handed push-ups!’

Jed knows he’s the only one who can do those.

He uses his right hand to give me the rude finger. ‘Just don’t be last then, Sticks!’ 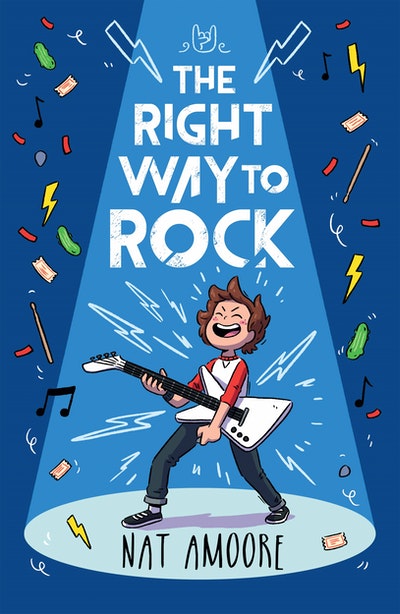 The Right Way to Rock

The sounds of Watterson create a rhythm.