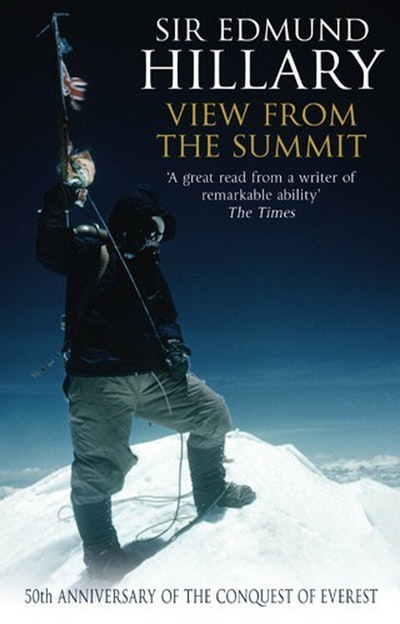 View From The Summit

The complete autobiography of one of the great icons of this century - the first man to set foot on the summit of Everest.

'Sir Edmund, he's worshipped, you know, as a god among the Sherpas.' Jamling Tenzing.

The first man to set foot on the summit of Everest, the man who led a team of tractors to the South Pole, the man who jetboated up the Ganges from the ocean to the sky has, for the first time, gathered all the remarkable adventures of a long life into one volume. But there is more to Ed Hillary than this. He is also the man who repaid his debt of fame to the Himalayas by inaugurating a programme of school, clinic, airstrip and bridge-building in Nepal which, with his still active support, has gone from strength to strength over the four decades since he himself mastered the Hillary Step and led his companion Tenzing Norgay up Everest's final summit ridge.

View from the Summit is a thoughtful and honest reappraisal of a life spent pushing human ability to its limits and relishing the challenges thrown down by the elements. It is also the story of a man whom the world has taken to its heart.

'He worked in a half light, huge and cheerful, his movement not so much graceful as unshakably assured, his energy almost demonic. He had a tremendous, bursting, elemental, infectious, glorious vitality about him, like some bright, burly diesel express pounding across America.' Jan Morris

Sir Edmund Hillary was born in 1919 in Auckland, New Zealand and served in the New Zealand Air Force during the Second World War. Knighted for his ascent of Everest in 1953, he achieved many more adventuring 'firsts' before establishing the Himalayan Trust, an organization devoted to improving the lives of people living in the Himalayas. He has two surviving children by his first wife, Louise, who died tragically in a plane crash with their third child, Belinda. He is now married to June, widow of his Antarctic partner Pete Mulgrew. Sir Edmund and Lady Hillary live in Auckland.