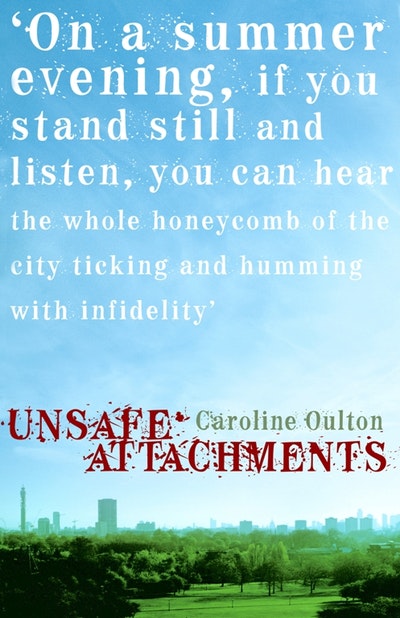 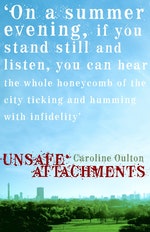 Unsafe Attachments explores the relationships of a loosely interlinked group of Londoners. Caught off guard at key points, they face moments of sudden temptation in their busy, established lives, as well as increasingly difficult choices.

Dinah, harried and pregnant, is haunted by images of death on her way to Heathrow. Abi, a senior civil servant, embarks upon an affair with a Nigerian journalist as her teenage daughter 'kind of shags' her teacher. Alex, increasingly keen to settle down, numbly accompanies his ex-girlfriend to an abortion clinic. A glance at a party turns into a fumbling grope and then a guilty hangover for Roger, whose live-in girlfriend is smugly satisfied that her life is on course. Lonely café-owner Carey spots his married shrink passionately kissing another woman in a park while Tina's desperate wish for a child jeopardises everything that is important to her.

Relationships are acutely observed - the delights and tensions of living together, cheating on one another and trying to make lasting connections in this vast modern city. Love - real or imaginary - causes hearts to crack and lives to crumble but there is also hope, and sometimes there are second chances.

Caroline Oulton worked in television drama for more than twenty years, and Unsafe Attachments is her first work of fiction. She lives in London with her three children.

“A witty, observant and passionate collection of stories”

“The stories loiter disturbingly in the memory, a terrific compendium of messy lives, betrayals, heartbreaks and tragedies”

“Themes of infidelity and insecure lives of folk in the big city dominate Caroline Oulton's first collection of short stories ... A sad, funny, closely observed set of tales about the seemingly different lives of people living in a London neighbourhood.”

“The stories themselves are interwoven skilfully and each provides a satisfying probe into the characters' illicit lives, which engage you wholly, in the same guilty way as a gossip magazine. Oulton's prose is effective, nakedly frank and at intervals, truly delightful.”