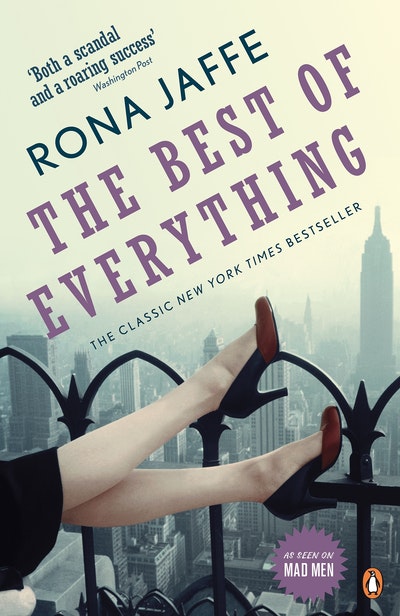 The Best of Everything

Before Valley of the Dolls and Mad Men came this iconic novel of four young women making their way in New York City.

When it first published in 1958, Rona Jaffe's debut novel electrified readers who saw themselves reflected in its story of five young employees of a New York publishing company. There's Ivy League Caroline, who dreams of graduating from the typing pool to an editor's office; naive country girl April, who within months of hitting town reinvents herself as the woman every man wants on his arm; Gregg, the free-spirited actress with a secret yearning for domesticity. Now a classic, and as page-turning as when it first came out, The Best of Everything portrays their lives and passions with intelligence, affection, and prose as sharp as a paper cut.

Includes a foreword by the author.

Rona Jaffe is the internationally bestselling author of such novels as Class Reunion, Mazes and Monsters, The Best of Everything, The Cousins, Family Secrets, Mr. Right Is Dead, The Last Chance, and Five Women. She has been writing for more than five decades and is considered one of the foremost chroniclers of relationships in the modern age. She is the founder of the Rona Jaffe Foundation, which offers a national literary award to female writers. Ms. Jaffe resides in New York City.

Praise for The Best of Everything

This stirring, evocative novel tells it exactly as it was

Not since One Day have I stayed up so late reading a book, but Rona Jaffe's The Best of Everything has me gripped...So much more than chick-lit

The emotional lives of these women are beautifully drawn...It is, I think, the perfect summer read: juicy, involving and classy. Even as you smile at the thought that smoking was once considered a skill, and white cotton gloves a wardrobe basic, it will also make you feel nostalgic for your own past, for those feverish days when fear and elation were pretty much the same thing

One of Don's first bed companions in series one of Mad Men is not another woman, but The Best of Everything, this 1958 novel by Rona Jaffe...It is a world of typing pools and tie-wearing at all times; of whiskey drinking and womanising; a world in which secretaries grope their way towards feminism with difficulty and bosses grope their secretaries with with ease...As Draper himself might say: fascinating

Decades before Sex and the City, Jaffe recorded the minutiae of women's lives and broke powerful taboos.