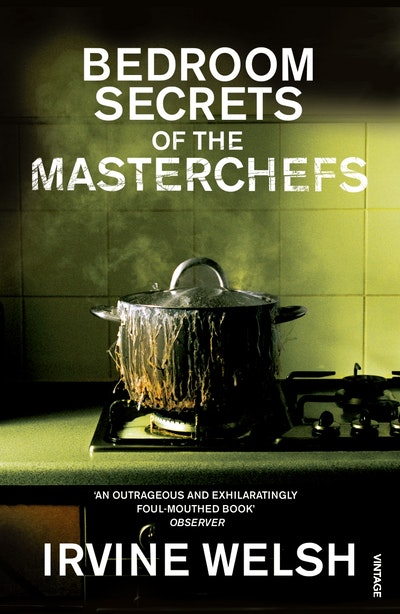 The Bedroom Secrets of the Master Chefs

At Edinburgh's Department of Environmental Health, hard-drinking, womanising officer Danny Skinner wants to uncover secrets: 'the bedroom secrets of the master chefs', secrets he believes might just help him understand his self-destructive impulses. But the arrival of the virginal, model-railway enthusiast Brian Kibby at the department provokes an uncharacteristic response in Skinner, and threatens to throw his mission off course. Consumed by loathing for his nemesis, Skinner enacts a curse, and when Kibby contracts a horrific and debilitating mystery virus, Skinner understands that their destinies are supernaturally bound, and he is faced with a terrible dilemma.

Praise for The Bedroom Secrets of the Master Chefs

Irvine Welsh is in a class of his own...[his books have] a seething life in them that rivets attention and an inventiveness with story and language that continually amuses and amazes

The Bedroom Secrets of the Master Chefs is Welsh back on cracking, page-turning, stomach-churning, gut-busting form. You'll whiz through it, in a good way

An outrageous and exhilarating foul-mouthed book

Flickers with the dynamism, black humour and imaginative bravado that is Welsh at his best

Rattles along with impressive energy

The great liberation of Welsh's writing is it's ability to capture the lust for freedom...the most touching and beautiful of his writings...if her carries on like this he'll start dragging the place [Scotland] back to the bloody enlightenment

This is Welsh's tightest narrative structure in some time, and a pleasing change of pace after his previous two novels...a carefully considered blend of three-dimensional realism and expertly judged modern gothic horror. Welsh is such a convincing writer that you never doubt his plot for a moment

This transitional phase in his life is has been mirrored by a new direction in Welsh's writing as evinced by this new book, The Bedroom Secrets of the Master Chefs. The novel is less visceral than his past work and is more in dialogue with Celtic writers such a Oscar Wilde than it is music, the form he has long claimed his inspiration

This, his eighth work of fiction since Trainspotting, has all the ingredients of his earlier success. I found it funny, dark and readable, showing the author on good form

Vintage Welsh: Brilliant, graphic, with frequent forays into the grotesque

Welsh gives more than a passing nod to Dorian Gray in this latest outing...in a supernatural twist Welsh unleahes his usual irresistible mayhem