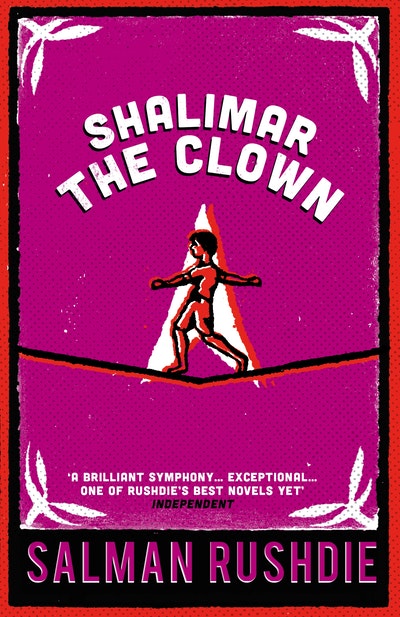 'This is Rushdie at his most flamboyant best' John Sutherland, Financial Times

Shalimar the Clown was once a figure full of love and laughter. His skill as a tightrope walker was legendary in his native home of Kashmir. But fate has played him cruelly, torn him away from his beloved home and brought him to Los Angeles, where he works as a chauffeur. One morning he gets up, goes to work, and brutally slays his employer, America's former counter-terrorist chief Maximilian Ophuls, in full view of the victim's illegitimate daughter, India. Despite the political overtones, it soon emerges that this is a murder with a much darker heart to it.

The killing has its roots halfway across the globe, back in Kashmir, a ruined paradise not so much lost as shattered. And gradually it emerges that beyond this unholy trinity of Max, India and Shalimar, lurks a fourth, shadowy figure, one who binds them all together.

'This is Rushdie at his most flamboyant best' Financial Times

Salman Rushdie is the author of thirteen previous novels – Grimus, Midnight’s Children (for which he won the Booker Prize and the Best of the Booker), Shame, The Satanic Verses, Haroun and the Sea of Stories, The Moor’s Last Sigh, The Ground Beneath Her Feet, Fury, Shalimar the Clown, The Enchantress of Florence, Luka and the Fire of Life, Two Years, Eight Months, and Twenty-Eight Nights, and The Golden House – and one collection of short stories: East, West. He has also published four works of non-fiction – Joseph Anton, The Jaguar Smile, Imaginary Homelands, and Step Across This Line – and co-edited two anthologies, Mirrorwork and Best American Short Stories 2008. He is a member of the American Academy of Arts and Letters and a Distinguished Writer in Residence at New York University. A former president of PEN American Center, Rushdie was knighted in 2007 for services to literature.

Praise for Shalimar the Clown

A brilliant symphony... Exceptional... One of Rushdie's best novels yet

Extraordinary... Worth engaging with at every level; a thrilling story told in thrilling language

Shalimar the Clown is Rushdie's most engaging book since Midnight's Children. It is a lament. It is a revenge story. it is a love story. And it is a warning

Deeply disturbing and immensely moving... An exquisite, broken thing of pain and beauty

Excellent... A characteristically daring walk along the tightrope of fiction

This is an important book... Wonderful

I'd say it's his best novel yet

There are some breathtakingly eloquent passages

There are great sweeping set-pieces, like the maharajah's abortive banquet just after Partition, as the old tolerant order is swept away in a thunderstorm that recalls the climactic scene in Midnight's Children. There are reams of biting satire on the Indian army's myopia or the intransigence of the jihadists, a potpourri of portents, a clash of multi-dimensional symbolism, and also, amid the gradual assemblage of tragedy, unexpected flashes of comedy

Shalimar the Clown finds [Rushdie]...writing at his best

Rushdie combines the wonder of fairy tale with the grittiness of hard, political realism

Like his best work, it traverses tumultuous passages of national history

A sprawling tale of love and politics... A daring aesthetic and political balancing act that traffics in many of the major concerns of post-colonial literature, but always within an evolving and bravely empathetic story... One of Rushdie's best, and an important and rewarding must-read

Read Shalimar the Clown for the effervescent fun factor that is always present in Rushdie's work...and for its devastating portrait of the destruction of Kashmir

A masterly deployment of interconnected narratives spanning six decades... Dazzling... A magical-realist masterpiece that equals, and arguably surpasses, the achievements of Midnight's Children, Shame and The Moor's Last Sigh... The Swedes won't dare to offend Islam by giving Rushdie the Nobel Prize he deserves more than any other living writer. Injustice rules

The transformation of Shalimar into a terrorist is easily the most impressive achievement of the book, and here one must congratulate Rushdie for having made artistic capital out of his own suffering, for the years spent under police protection, hunted by zealots, have been poured into the novel in ways which ring hideously true... Shalimar the Clown is a powerful parable about the willing and unwilling subversion of multiculturalism