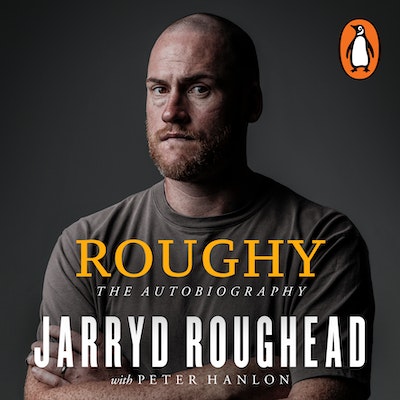 Roughy is a story of perspective, a must-read of 2020 that’s much more than a footballer’s tale.

Cancer doesn’t discriminate.
When things were at their worst for Jarryd Roughead, his four premierships, two All-Australian gongs and a Coleman Medal counted for nothing. Being that rare footballer who was as loved by opposition fans as his own was no help either.
As he spent his days vomiting or curled up with the cat, and his nights in a pool of sweat, fully clothed yet freezing, rolling out of bed every couple of hours to dunk his feet in cold water to douse the feeling that they were on fire, all that mattered was that he didn’t stop believing.
Belief is one of those intangibles that puts great athletes above the pack. But this was no game. Roughead knew he had to keep believing he’d get better, otherwise he’d lose. And if he lost this battle, there would be no next week.
Roughy is the story of a footballer who lived the dream, the country boy who not only became an AFL star, but was a key player in a Hawthorn team that will be remembered as one of the greats of any era. Success didn’t change him, which made him all the more relatable, as if in spirit he was still having a kick with the Leongatha Parrots and a beer with his mates at the local pub.
When in 2015 a spot on his bottom lip was diagnosed as melanoma, we could relate to him all the more. When it returned as spots on his lungs the next year, the gravity we routinely attach to football’s wins and losses seemed ridiculous.
In Roughy, you’ll discover the resilience that got him through horrendous immunotherapy and helped him to not only play AFL again, but as Hawthorn captain. The same trait his forebears had in spades when they emigrated from Scotland, found no joy on the Victorian goldfields, so made their way to Gippsland and put down roots deep enough to have a Roughead St and Roughead Rd named after them (although the street signs have had a strange habit of disappearing over the years).
You’ll read the stories of his childhood, of the basketballer who switched sports and learned not just to believe, but to expect to be the very best. Of his love for Sarah and their daughter Pippa, his unwavering will to carry on, his dignity through a final chapter of his career that was dignity personified, with a fairytale ending that was celebrated by all.

One of the AFL’s cult heroes, Jarryd Roughead carved a place amongst the competition’s elite as an athletic forward blessed with excellent agility and strong hands. A talented junior basketballer good enough to contest several underage national championships, Roughead began to concentrate on football at 15 with immediate results. He gained a place in the AIS-AFL Academy in 2003 after an excellent National Bank’s AFL Under 16 Championships and gained senior experience by playing for Leongatha in the Gippsland Latrobe Football League during his final junior year.
With 40-plus goals during the 2004 TAC Cup season with Gippsland Power, Jarryd underlined his versatility and was taken by Hawthorn with pick 2 at the 2004 AFL Draft. A return of 16 games in his debut season, capped by a nomination for the NAB Rising Star, was a superb result for both Roughead and the Hawks. After a solid year in 2006, Hawthorn swung the left footer forward in 2007 with immediate success, kicking 40 goals and announcing himself as a player of the future.
2013 was a career best season, winning the Coleman medal, playing in his second Premiership with the Hawks, named in in the 2013 All Australian team and coming runner up in the Hawks Best and Fairest. In 2014 he completed another successful year with the Hawks culminating in another Premiership. There was no stopping Jarryd and the Hawks in 2015 playing in his third Premiership in a row and being named an All Australian.
Roughead missed the first half of the 2016 season with a posterior cruciate ligament injury to his knee. In May, he received news a melanoma on his lip had spread and he stepped away from football to receive treatment. Late in 2016, Jarryd received positive news and the all-clear from doctors following months of immunotherapy, and was looking to return to footy early in the 2017 season. He successfully did so, being named captain for the upcoming campaign. Roughead played 22 games, including his 250th game for the club.
Roughead called an end to a illustrious career in 2019, playing 8 games and kicking 15 goals. He will be remembered as a Hawthorn legend and huge part of their most decorated period in club history. However, with an endearing demeanour and a typically country character, Roughead has remained grounded throughout his AFL success.