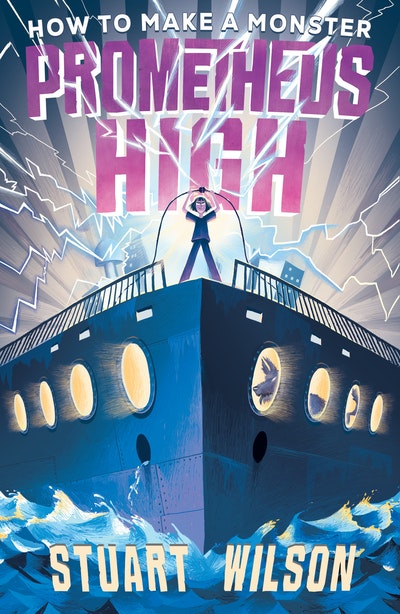 Prometheus High 1: How to Make a Monster

All aboard the SS Unbound. You can leave your bags with the golem, so grab a bucket and catch as many of the raining frogs as you can. Just make sure you’re wearing your orange sash – it will make you easier to spot if you’re swept overboard.

OF RAIN AND ROOFTOPS

She almost lost her footing on the rain-slicked tiles as thunder boomed overhead.

With jumper leads in each hand, Athena looked up at the swiftly-moving clouds from her position on the rooftop.

The jumper leads had come from the boot of Mum’s car. Athena’s fingers were still sore from stripping off the rubber casing. She’d attached the exposed wires to an extension cord she’d found in the garage.

Lightning flashed again, illuminating the makeshift operating table that stood outside the attic window. She half-slid, half-climbed down the roof, her raincoat trailing behind her. Accelerating wildly towards the edge of the gutter – and the three-storey drop – her

heart leaped into her mouth. At the last moment, she caught her foot on the windowsill.

She crawled across the roof tiles on her knees. Mrs Mallory’s dead calico cat – not even a year old, more of a kitten really – lay on the operating table. ERWIN was etched in large, flowery letters on the purple, metal nametag. He had been hit by a car on Monday, buried on Tuesday and exhumed by Athena on Wednesday. Her stitching job looked okay, though she hadn’t been able to do much about the twisted back leg. The less said about his missing right eye, the better.

She glanced at the sky. Another minute and the storm will have passed by. Better hurry up.

Athena yanked on the jumper leads, giving her some slack to work with. She struggled to attach the alligator clip to one end of the car battery sitting next to Erwin. Cursing, she fumbling with the thick rubber gloves in the pouring rain.

Thunder cracked, and to Athena it felt like the whole house shook.

She wound the hand crank on the small generator, hearing it splutter to life. She turned the knob on the electro-oscillator up to eleven, seeing the waveform on the screen stretch then compress. A hum began – a sound most wouldn’t hear above the storm, but it was Athena’s favourite soundtrack.

A dozen wires were attached to Erwin and Athena did a final visual check, following the wires to the battery

and generator, then along the jumper cables that snaked across the roof, leading to the chimney . . .

. . . where the lightning rod pointed to the heavens.

Athena stared at Erwin, exhaling through pursed lips. Her body tingled, not only with nervousness, but anticipation. Not long now, buddy, she thought. You’ll be back on your paws in no time. And I will have finally succeeded in doing the impossible.

Clouds roiled above her. Athena pulled down on the lever attached to the battery.

Had she missed her chance?

Lightning stabbed down to hit the lightning rod.

The battery exploded, the jumper leads thrashing about like an out-of-control fire hose. Another bang. Athena shielded her face from the exploding operating table. Splinters stabbed her forearm.

Note to self: wear protective goggles next time.

She opened her eyes. Her entire set-up . . . gone. Days of preparation . . . wasted. A frayed length of cable was all that remained.

Also, the roof was on fire.

Prometheus High 1: How to Make a Monster Stuart Wilson

A hugely inventive, action-packed, fun and quirky – and occasionally dark – adventure for fans of Skulduggery Pleasant, Nevermoor or Frankenstein.