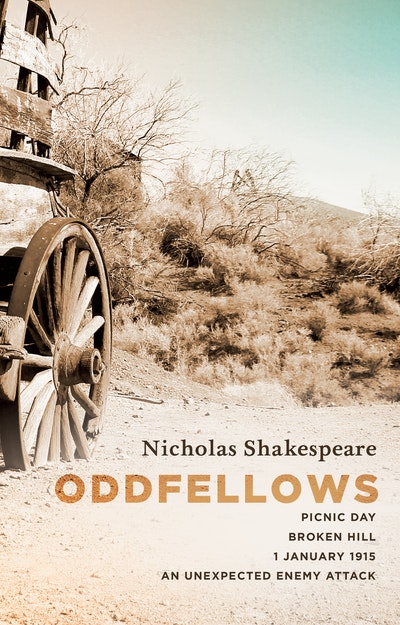 It was the annual picnic day in Broken Hill and a thousand citizens were dressed for fun when the only enemy attack to occur on Australian soil during World War I, took them by surprise. Nicholas Shakespeare has turned this little known piece of Australian history into a story for our time.

One of Britain's finest writers (who is also an adoptive Tasmanian). This very sad story, steady, stoical and unrhetorical in the way Nicholas Shakespeare tells it, restores to a human scale what wanton death, suicidal defiance in the name of Allah, explicable grievances and absurd tragedy look like with real human faces. I do not expect to read a more formidable piece of short fiction this year.

Shakespeare has mined, shaped and polished one of the most superb literary gems I have read in recent times. Only John Boyne's The Boy in the Striped Pyjamas comes close. Facts and fiction merge in this riveting and relevant work. In a word ... brilliant!

A spare, brilliantly evocative tale of the outback jihadis and the attack most of us have never heard of. A slight but powerful book and Shakespeare immersed himself in the time and place to write the story. Recent terrorist attacks have, sadly, accentuated the fact Shakespeare's story is a timely one.

Nicholas Shakespeare has created a slim, sensitive and simply beautiful novella. He writes with exquisite restraint of the yearning, ignorance, hope and hopelesness of life in the wartime mining town. It is history it seems we've been doomed to repeat.

Shakespeare captures this historical moment beautifully and in elegant prose creates a complex inner life for Rosalind, who is a wonderfully drawn character. It's a fascinating story, however, and skilfully told. It is also timely. Because the story Shakespeare tells resonates so deeply with current tensions. It is weightier than its length might suggest.

What a strange and enticing story, told with a great sense of escalating tension but also in a somewhat detached manner. Here is an account of the only enemy attack on Australian soil during World War I. It happens in Broken Hill during the annual picnic day in 1915. Its short and yet very meaty. Love this.

We turn to historical fiction as much to unravel the present as the past, and in that regard the publication of Nicholas Shakespeare’s Oddfellows is uncannily well timed. Its release coincides with the centenary of the incident at its heart, but recent events mean it will be read against the backdrop of the siege in Martin Place, as well as the Melbourne encounter between police and Numan Haider.

In this short novel, Oddfellows, Shakespeare takes the events of that day [1 January 1915] and creates an allegory that resounds strongly today. Shakespeare's evocative language takes us back and forth over days and months to unravel the reasons for the events of January 1, before unrolling the violence and the death of innocents.