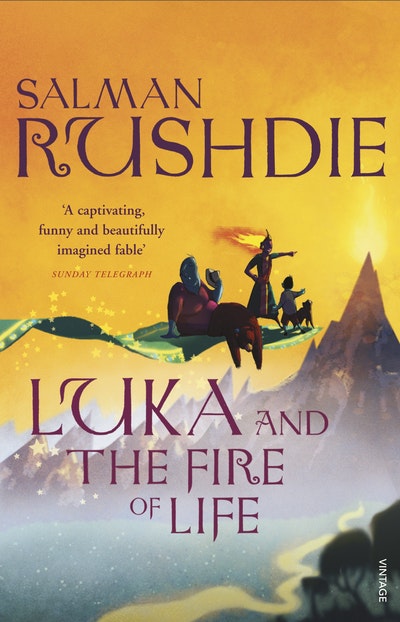 Luka and the Fire of Life

A glittering, magical fable, the follow-up to the bestselling Haroun and the Sea of Stories

On a beautiful starry night in the city of Kahani in the land of Alifbay a terrible thing happened: twelve-year-old Luka’s storyteller father, Rashid, fell suddenly and inexplicably into a sleep so deep that nothing and no one could rouse him. To save him from slipping away entirely, Luka must embark on a journey through the Magic World, encountering a slew of phantasmagorical obstacles along the way, to steal the Fire of Life, a seemingly impossible and exceedingly dangerous task.

With Haroun and the Sea of Stories Salman Rushdie proved that he is one of the best contemporary writers of fables, and it proved to be one of his most popular books with readers of all ages. While Haroun was written as a gift for his first son, Luka and the Fire of Life, the story of Haroun’s younger brother, is a gift for his second son on his twelfth birthday. Lyrical, rich with word-play, and with the narrative tension of the classic quest stories, this is Salman Rushdie at his very best.

Praise for Luka and the Fire of Life

There is something endearing about the obvious delight that Rushdie takes in the creation of his characters.

A bustling and minutely imagined fabular landscape, crammed with allegorical figures and places...its exuberance is inextricably linked to its profligacy with puns, rhymes, one liners and snippets of nonsense...it captures brilliantly that moment when adults enrapture children by behaving like children themselves

Gave great pleasure: he has shown that he is also - rather unexpectedly - one of our best writers for children.

William Dalrymple, Guardian, Christmas round up

A playful, inventive statement to a son, a story of growing up and imminent self-awareness, a tale of magic.

Rushdie takes us further into Luka's quest to bring his father back from a deathly sleep, Haroun's little brother and his world of flying carpets and fantastical creatures, set amid the warm heart of an Indian family, works its own fictive magic

Rushdie's children's story is a celebration of the imagination, brimming with puns, riddles and rhymes.

Rushdie's children's story is a celebration of the imagination, brimming with puns, riddles and rhymes

There are moments that are startlingly beautiful, both for the richness of the imagining and the crafting of some of the prose...parents who are keen on reading aloud to their children will take great pleasure in the tale and its telling, and will find this fable, like its predecessor, an eloquent example of the games a fine storyteller can play.