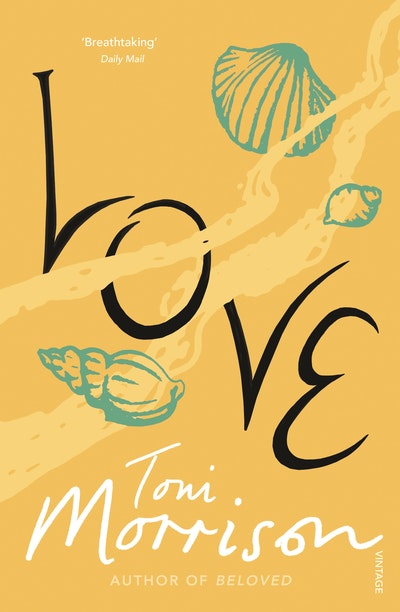 A haunting and affecting meditation on love from the Nobel-prize winning author of Beloved.

May, Christine, Heed, Junior, Vida - even L - all are women obsessed with Bill Cosey. He shapes their yearnings for a father, husband, lover, guardian, and friend. This audacious vision from a master storyteller on the nature of love - its appetite, its sublime possession, and its consuming dread - is rich in characters and dramatic events, and in its profound sensitivity to just how alive the past can be. Sensual, elegiac and unforgettable, Love ultimately comes full circle to that indelible, overwhelming first love that marks us forever.

This is a novel that demands to be read at least twice, for it is so rich and satisfying that it sweeps you into a subtle world that you need time to take in... Quite breathtaking

Love is her best work yet, a slender but mesmerising tale

When Morrison writes at her best, you can feel the workings of history through her prose

This novel is a searing, haunting, yet beautiful masterpiece. The story resonates in the mind long after the last page is turned. Buy it. Read it

An affecting and absorbing novel

Like love at first sight, it has the ability to startle

A deeply affecting work by a Great American Novelist who is still...at the top of her form... Morrison's tender, taut prose wastes no word, no syllable, no letter... A novel of devastating revelations, impeccably arranged

A marvelous work, which enlarges our conception not only of love but of racial politics, the ubiquitous past and...paradise

A dense, dark star of a novel...with Morrison writing at the top of her game

Like every other stealthy Morrison novel, Love has closets and cellars, bolt-holes and trap-doors and card tricks... Yet again, she gives us dreams

The carefully crafted work of a storyteller entirely unburdened by her Nobel Prize... William Faulkner and Eudora Welty would feel right welcome... The moral palette of this novel displays a full range of colors

A profound commentary on the power of love

Love is slim and tight as a folded fan, yet from it the author flashes a panorama three generations wide... When the reader closes the book...there is the satisfaction of a song that has ended just right. The standing soloist we applaud....is the fierce literary intelligence of Morrison striking the chords of human experience and playing it wise

Magisterial and gripping...a knockout... A reminder of what a marvel a novel can be

To enter a novel by Morrison is to enter a world fully imagined, and Love is no exception... Love takes you on the first page and holds you in the welcome spell of a writer who knows what she's doing, and who can slip into the most ordinary sentence a twist of surprise

Love is Morrison back at the peak of her talent... The novel lives up to its name and puts to rest any doubts that its author is anything except great

Love...[is] like that song you remember from long ago, the one you danced to, sweet and slow, and which has haunted you ever since... Morrison's tale lies in its telling, not just the lilting lyricism of her prose but also the insight into her characters' hidden hearts

For pure pleasure, it deserves to be read more than once

There is beauty and wisdom in Love... Her lyrical talent and her profound intelligence...make themselves felt