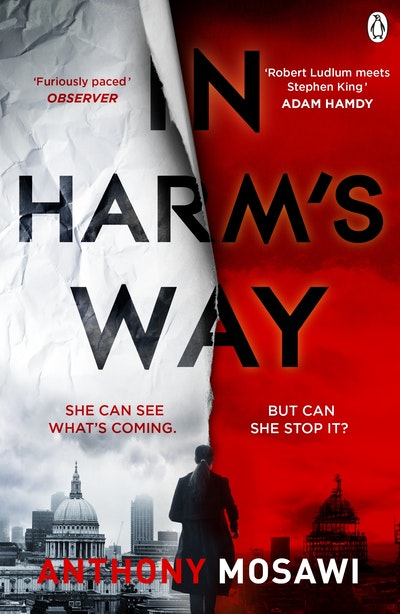 A pacy thriller with a supernatural twist, for fans of Lisbeth Salander and Killing Eve

All her life, she's been running - from the men who've hunted her, and from the memories that haunt her.

But the time for running is over. To right the wrongs of her past, she must act.

Sara's abilities defy all logic and reason. With her help, MI5 have an asset unlike any other. But to keep her safe, they must keep her hidden. In the wrong hands, their greatest advantage could be an enemy's greatest weapon...

Sara is determined to save as many innocent lives as possible. But as her past, present and future collide, she faces an impossible choice. Save herself? Or risk everything to protect the future as we know it...

Praise for In Harm's Way

Furiously paced, there is nothing derivative about this debut. A young girl is locked in a sensory deprivation tank; years later she begins to piece together the fragments of her past. The action that follows is cleverly inspired by a real-life figure, Helen Duncan, a Scottish medium who came to the attention of Winston Churchill during the Second World War

Will have you guessing till the very last page. Explosively exciting, Trust No One is an instant spy classic

With a shadowy past and a secret program, Mosawi blasts Sara Eden into the pantheon of contemporary thriller stars

Nail-biting. Trust No One moves at a blistering pace and creates an extraordinary, terrifying world

Sara Eden is a brilliantly unique character who we can't help rooting for as she maneuvers the complex and thrilling world that Mosawi has created. This book was impossible to put down

Mosawi has done something wonderful with In Harm's Way. He's crafted a pulse-pounding, first-rate thriller, and coupled it with an unforgettable protagonist, something rarely seen in the genre. I could not put this book down

Robert Ludlum meets Stephen King. In Harm's Way is a fantastic, fast-paced thriller that confounds expectations. Anthony Mosawi has created a wonderfully original character in Sara Eden and I can't wait to see more of her. Highly recommended

A masterful, action-packed page-turner that rises well above the genre

Anthony Mosawi's masterful new novel In Harm's Way is an unrelenting thrill ride. As the clock ticks down, a cast of brilliant, beautifully drawn and fascinatingly imperfect characters must find a way to work together to prevent unspeakable carnage. Sara Eden, the main character, is compelling and marvellously complex. I absolutely loved it